This 9th Project in the Malawi Borehole Program has been completed.  The Conclusion Report follows the project description below. #CONCLUSION 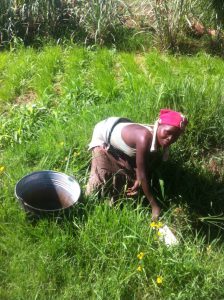 Community Description
Saiti is a typical rural Malawian village, without running water or electricity, located along a dirt road, about an hour away from the city of Zomba. Saiti has one broken borehole, built in the 1990s, that was hand-dug to a depth of only 6 meters. Saiti also has a shallow, hand-dug well capped with a cement silo. Residents currently walk 6-8 kilometers to fetch clean water.

Problem Addressed
There is no accessible clean water source for residents of Saiti Village. This leads to illness and, in some cases, death, particularly among children under the age of 5. Most residents currently fetch water for drinking and cooking from dirty wells or waterways like streams or rivers. Women, in particular, are vulnerable in the absence of clean, nearby water sources.

Project Description
This project is to construct a borehole in Saiti Village.

The borehole location was chosen by a village project committee, acting on behalf of the entire village. The site is publicly accessible.

Construction will be done by EZ Borehole Drillers, a company located in Blantyre, with substantial experience in the area, including other boreholes funded by Water Charity.

The installation will take three days to complete. It is expected that water will be reached at about 45 meters, but the well will be drilled to a depth of about 60 meters, if necessary. Before drilling, a hydro-geographical assessment using electrical measurements will be conducted to find the depth of the underlying aquifer. The borehole will be guaranteed for one year by EZ Borehole Drillers.

Water Charity funds will be used to pay for the skilled labor as well as for the materials that cannot be found locally, such as piping, fixtures and fittings, and concrete.

The community will contribute volunteer labor, materials, including bricks and sand, and about $300 in cash.

The project will be administered by RPCV Michael Buckler, founder, and CEO of Village X Org, a social enterprise located in Washington, D.C. dedicated to improving community development work in sub-Saharan Africa. He is a member of the National Peace Corps Association, Friends of Malawi, and Returned Peace Corps Volunteers of Washington, D.C. 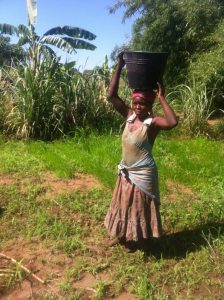 Project Impact
2,035 people, living in 402 households will benefit from the project.

Village X will gather data from the nearest health clinic to evaluate the impact of the borehole, comparing rates of waterborne illness before and after installation.

This is an important infrastructure project that will improve the health and well-being of Saiti. It is well-planned, with strong management and fiscal safeguards in place. It incorporates elements of oversight and buy-in by the residents to make the project sustainable into the future.

This project has been funded through the generosity of Susan Coppa, in honor of the memory of her mother, Rose D. Mooradian. Rose served for 2 years as a Peace Corps Volunteer in Liberia, starting in 1985, and as a medical officer in Malawi from 1988 to 1991.

This project is the ninth to be implemented under our Malawi Borehole Program, which is a part of our ongoing East Africa Water & Sanitation Program. If you would like to help us with more projects such as this one, please click the Donate button below. 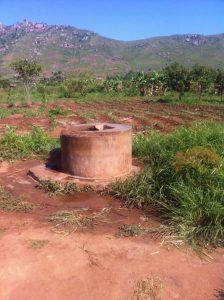 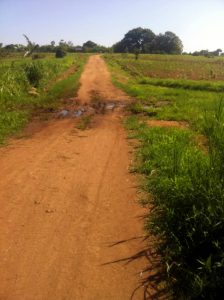 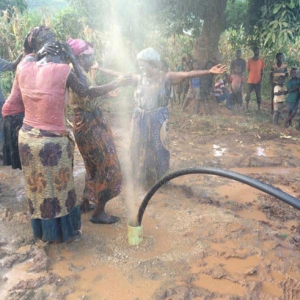 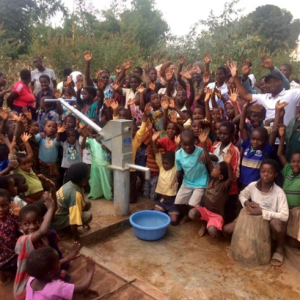 The Borehole was successfully completed in April of 2017.  There was a bit of delay on this project en route to its successful completion as project manager Mike Buckler explains: 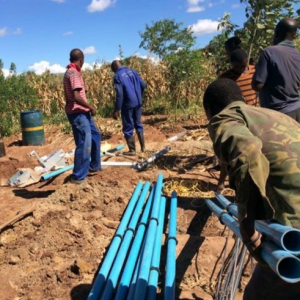 The delay was that Saiti Village elected to postpone drilling of the borehole until after the maize harvest, as the chosen location of the borehole imperiled some of the maize crop. Hope you are well. Our report follows.

Using funds from Water Charity, EZ Borehole Drillers drilled a borehole at Saiti Village, Malawi, starting on April 8, 2017, and finishing on April 12, 2017. The borehole was drilled to a depth of 47 meters. The water was tested and declared clean for drinking purposes. EZ Borehole installed a standard metal pump mechanism, a cement foundation to protect the pump mechanism, and a cement spillway to channel excess water. On May 13, 2017, after letting the cement around the borehole dry and harden, the community and Village X Country Representative, Myson Jambo, gathered to open the well. The well is in use by the community (see pictures below), serving 402 households and 2035 people. The borehole has a one-year guarantee against equipment malfunctions and other failures to harness clean water from the underlying acquirer.

The Malawi Borehole Program’s ninth project is complete. Thank you! 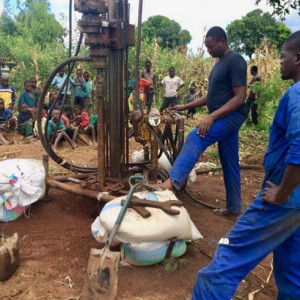 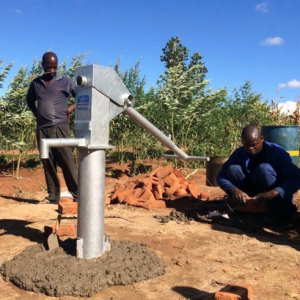