Community Description
The community that this project will target is the Xxxxxx Village of the Ryakibogo Cell of the Gishamvu Sector. 4,112 people make up the cell and 445 people make up the village. 95% of the population in this area are farmers, growing a multitude of crops, including rice, beans, maize, potatoes, sweet potatoes, cassava, and tomatoes.

In Rwanda, some health centers have health posts associated with them. Health posts are smaller versions of health centers and offer a number of important services, such as malaria testing, general consultation, and maternity care.

The Xxxxxx Village health post is on the other side of the sector from the health center, allowing the people who live in that area to access health care without the 10+ kilometer walk. The health post has a staff comprised of seven people: two nurses, one lab technician, one pharmacist, one registrar, one guard, and one cleaner. On average, the health post serves 600-700 people per month.

Problem Addressed
While the health post is a great resource for the community, it is lacking in a lot of basic necessities. The most pressing concern is its lack of water. At the moment, the cleaner, or umukozi, named Janvier, fetch water for the entire health post. A tap is located a 15-minute walk away from the health post. He fetches the water in jerrycans and has to make the 30-minute round trip between five and ten times per day. With only one cleaner in the entire post, it is a tiresome job keeping the post, the medical supplies, and the nurses’ uniforms clean on a daily basis, in addition to obtaining water.

Also, with the lack of easily accessible water, only the bare minimum can be used. This can lead to an environment where the disease is easily spread, of special concern to pregnant women and infants who are susceptible to infections and visitors to the health post for maternity and postnatal care services. 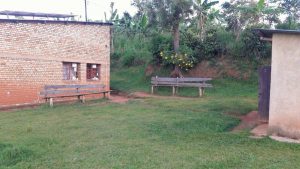 Project Description
This project is to build a water system to serve the health post and the provide water for the entire community.

A collection box will be built to contain the water coming down from the hills. Piping will be run to an air valve chamber and then to a tap at the health post. A collection tank and a soak pit will also be built.

The water source chosen for this project is in a government-owned forest where people and animals are far and few between and machines are non-existent. Permission of the government at the village, cell, sector, and district levels to use the source has been obtained. The source has a water flow of 2L/second.

The project was designed by the PCV and her Titulaire, working closely with a local engineer, who works for UB Consult, an engineering firm in the regional town of Huye.

This solution was determined to be the best under the circumstances. Bringing water from a tap 15 minutes downhill would have required a pump. A rainwater catchment tank at the health post would not provide enough water during the two dry seasons. The location of the underground water made a borehole prohibitive. 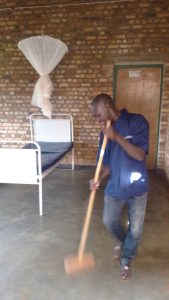 This system has six parts:

1. The Catchment Area: an underground chamber that collects and holds water from the source. This will be surrounded by a fence to protect it against animals.

2. Starting Chamber: an above-ground chamber, connected to the catchment area by DE90 PVC pipes. This is located downhill from the catchment area and the water flows down into the starting chamber. This chamber holds water, and the flow can be turned off when repairs are needed.

3. Piping System: DE50 PVC pipes connecting the starting chamber to the tap in the health post compound. These pipes are buried. There will be a total of 2,075.9 meters of piping (both DE50 and DE90 PVC). It is assembled by glue and joints.

5. Washout Basin: this is an above-ground chamber with a valve that allows the pipeline to be flushed in case of impediment. This is located at the lowest level of the waterline. There will also be a soakaway pit.

6. Tap: This is the access point in the health post compound, which will be free for the public to use.

It will possible to add more taps and a storage tank at a later time should the need arise. The water will not require treatment.

The labor and tools for digging to bury the pipes, and subsequent backfilling, will be donated by the community through public workdays, known as umuganda. The rest of the labor will be done by technicians and overseen by the engineer.

After the infrastructure is built, the health post nurses, the head of community health workers, the local community health workers, and the PCV will work together to teach a series of hygiene and sanitation lessons at the health post and surrounding areas, including the local school. The series will include a lesson on proper handwashing techniques, appropriate timing for handwashing, substitutes for soap, how to make handwashing stations, and more. This will ensure that people use the water they will now have access to in inappropriate ways.

The hygiene lessons will focus on using the water properly to ensure that disease is not spread. This will be given at the health post, as well as, to the community health workers, local schools, and surrounding villages.

This project has been funded by an anonymous donor. Donations using the Donate button below will be used for other projects in wanda. 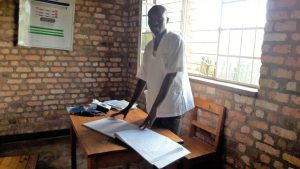 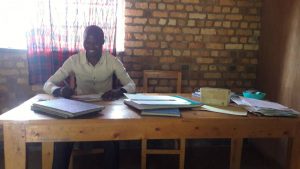