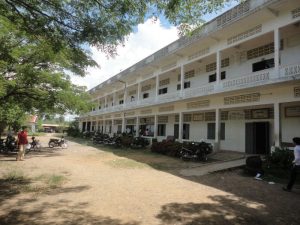 Community Description
Located in northwest Cambodia along the modern-day Thai border, Banteay Meanchey province has been at the center of turmoil for the better part of a millennium. After surviving an ongoing conflict between the Siamese and the Angkor Empire for control of the land that lasted for over 600 years, the region has been subjected to periods of colonization, civil war, and mass genocide within the last century.

Even after Pol Pot was eradicated from Phnom Penh in 1979, the Khmer Rouge was able to reestablish itself in the Malai Mountains and maintain a strong guerilla presence throughout Banteay Meanchey well into the early 1990s. Devastated by centuries of conflict and destruction, the province has only begun to know peace and stability within the last few decades.

Phnom Thom is a predominantly agrarian community located 23 kilometers south of the provincial capital and 323 kilometers northwest of Phnom Penh. The poverty rate is estimated at 44%, with many families lacking amenities as basic as electricity or running water. Inaccessibility to clean water and proper latrines is an issue for several villages throughout the area. 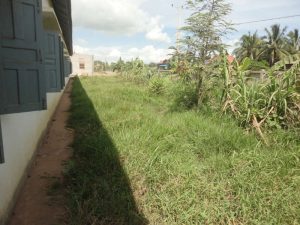 Phnom Thom High School, located directly on Highway 5, is one of the commune’s largest institutions. The school employs a staff of 83 people, while serving over 1,400 students from 4 separate communes.

Problem Addressed
The sanitary facilities at the school are inadequate. In spite of teaching over 700 students at a time in both the morning and afternoon blocks, the school only has two operating latrines.

The bathrooms become so congested that students have to sometimes wait in line for as long as 20 minutes in order to use them. This forces students to either skip class in order to return home to use the bathroom, or resort to using the trees and bushes behind the school. The former option is disruptive to the learning process, while the latter is unsanitary and raises health concerns.

Project Description
This project is to build a new bathroom with two toilets at the school.

The two squat toilets will be located in a stand-alone building located directly behind the South wing of the school, one of two buildings that currently have no latrines of any kind. The building will be built of brick and cement, while the roof will be made of metal.

The toilets will be of the standard concrete vault model used throughout rural Cambodia. 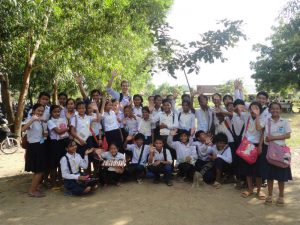 Water will be provided by rain-collecting cisterns during the wet season and by a nearby hand pump connected to the commune’s water supply during the dry season.

Unskilled labor, including digging and basic carpentry, will be provided by the school staff and a few community members who have agreed to donate their time to the project.

All skilled labor will be conducted by a trusted local contractor who has worked with the school and local health center several times. His labor will be paid for using Water Charity funds.

Project funds will also be used to purchase concrete, bricks, doors, toilet basins, roofing, and other materials necessary for the construction of the bathroom and installation of the toilets

Project Impact
Approximately 1,500 people will benefit from the project, including 83 permanent staff members, approximately 1,400 students in grades 7-12, and 15 cooks/sellers who provide meals for the students during the school day.

Comments
This is an essential infrastructure project for the school which will improve the health and well-being of students and staff.

Dollar Amount Needed
$0.00 – This project has been fully funded through the generosity of friends and family of Peace Corps Volunteer Matthew Beaumont, with additional amounts for future projects.

We encourage others to continue to donate using the Donate button below, and we will notify Matthew of your donation. Additional funds will be used to fund the next project by Matthew and/or those of other PCVs in the country of service.