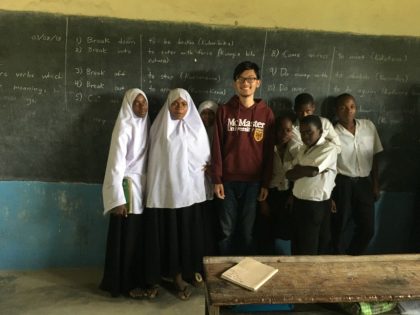 This project has been completed.  Please scroll down the page to read the conclusion.

Community Description
The community of Mxxxxxxxxxxx is located in the central part of Pemba Island. The terrain is flat and sandy, and is mostly covered by mangrove and palm trees. Agriculture is the only notable industry on Pemba, employing more than half of the total labor force. The major crops that are grown in the area include cassavas, potatoes, and cloves. Cloves, as a cash crop, are generally cultivated all over the island and are sold to the state, which acts as the sole consumer and exporter.

Unfortunately, since irrigation is almost nonexistent due to a recurring problem of water accessibility as a result of rapid climate change, crop production has decreased, affecting income and the standard of living.

Life on the island is peaceful. There’s not much going on, and most people prefer it to be that way. The inhabitants of Pemba are Muslims and are very religious folks. They adhere to the Quran faithfully, and because of that, the crime rates are rather low. 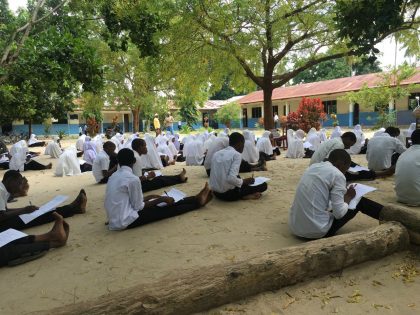 Problem Addressed
According to an assessment conducted by the United Nations Development Programme in Tanzania, despite receiving more than a trillion liters of rainfall annually, there is still a shortage of groundwater on Pemba. Only 7 percent of the aforementioned quantity is in fact usable due to surface runoff. In recent years, climate change has decreased the amount of rainfall on Zanzibar with residents expressing concerns about local wells drying up. In order to augment the already low standard of living in Pemba, it is important to improve the utilization of all available water resources on the island.

Project Description
The main objective of this project is to establish a rainwater harvest system for the community of Mxxxxxxxxxxx. As a viable solution, the community has proposed to utilize the only secondary school in the vicinity in order to develop a rainwater catchment and management network.

The pipelines will connect the new water tanks to an existing channel which then can be served as another source for water during the drier seasons. 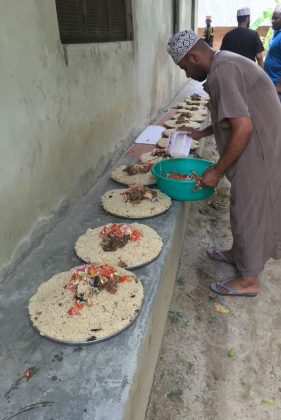 Water purification will include filtration of the gutters and chlorination of the underground storage tank.

This project will not only benefit the roughly 1,000 students that are enrolled in Mxxxxxxxxxxx Secondary School but also the nearly 3,000 inhabitants in the surrounding villages of Kibomani and Kitambuu. Students will benefit significantly from the project, as fetching water is a chore reserved only for them. The vast majority of those who are assigned to this task are female.

Calculations, made by the Peace Corps Volunteer (PCV) at the site, indicated that the secondary school is capable of collecting over 500,000 liters of rainwater annually.

The staff of the school makes up the majority of the project committee that will be overseeing the implementation of the new rainwater system. The committee consists of Headmaster Juma Said Hemed, Administrative Assistant Subira Maalim Sharif, and Peace Corps Counterpart Suleiman Ali Massoud. Permission to begin building was granted by Ward Executive Officer (WEO) Assaa Makame Said, District Education Officer (DEO) Hamisi Said Hamad, and by the Board of Mxxxxxxxxxxx Secondary School.

Education officials and local residents, with the support of the Peace Corps Volunteer (PCV), developed a proposal to establish a supplementary water source during the initial reporting process. This action gave rise to the establishment of the current project committee in October.

Inaccessibility to water has been the main challenge for the community. The community has always been and continues to be, the main driving force behind this endeavor. For that reason, project committee members have agreed, in bi-monthly formal meetings, to subsidize 26 percent of the costs. Cash contributions from the community will be used to pay for skilled labor to construct water pipelines, install plastic gutters, erect concrete platforms and move the storage tanks into places. The money will be collected by the WEO from families around Kibomani and Kitambuu and kept in the bank account of the secondary school.

Contractors from the Ministry of Education were able to present the committee with a completed budget for the proposed project. Government officials from the Zanzibar Water Authority (ZAWA) and the Zanzibar Utility Regulatory Authority (ZURA) have also provided technical support and information on how to preserve and maintain the new system. They also lent their expertise to the committee on rainwater storage procedures that would limit contaminations. 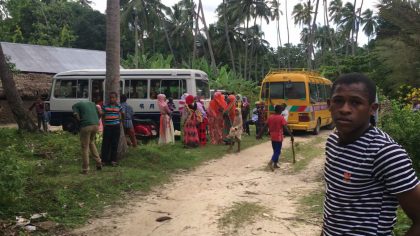 Project implementation will fall under the directive of reliable contractors employed by the Ministry of Education and ZURA.

There will be five phases to this project. The first will involve the purchases of needed materials and their storage. The supplies will be kept safe and under close supervision at the secondary school. This stage will be implemented during the last two weeks of October of 2018.

The second phase will bring about the construction of plastic gutters to catch rainwater throughout the school. A series of pipelines from the rooftops will lead to where a 10,000-liter polyethylene storage tank will be held. This container will be the only source for human consumption, as it can be properly sealed and filtered. This stage will be done during the first two weeks of November.

The third will require groundwork at the intended area. A hole will be dug and the water container installed. Relocating the storage tank underground is of the utmost importance as the force from the surrounding soil can prevent any fracture from occurring. Leaving a container of that size above ground can subject it to high temperatures and humidity which can result in leakages over an extended period of time.

Four additional minor polyethylene storage tanks, consisting of one 2,000-liter tank, one 5,000-liter tank, and two 3,000-liter tanks, will also be positioned at various previously-indicated spots to provide water for hygienic purposes. This stage will be finished after the third week of November. 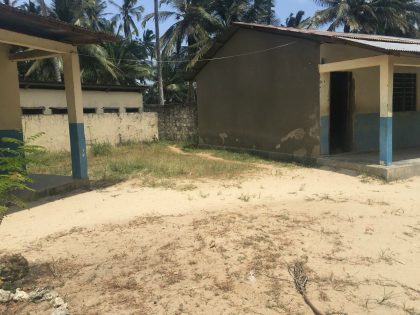 The fourth phase will consist of building a network of pipes to connect the three containers to the underground storage tank and to the main water line nearby. An electric pump to draw up the rainwater will be the final addition to completing the project.

The new rainwater harvest system is predicted to be finished by December of 2018, and will then be tested and inspected for any potential problems. Possible challenges range from the availability of certain materials to unexpected weather patterns.

Project Impact
1,000 people will benefit directly from the project and 3,000 people indirectly.

Monitoring and Maintenance
Data will be collected on the number of students who are absent during the drier seasons. Their attendance and examination results will be recorded and compared to the previous academic years. The number of hospital visits by community members of Kibomani and Kitambuu will also be examined to see if there are any changes. The further review concluded that a contingency plan is not needed for this project.

Servicing will be done mainly by government personnel from ZAWA and ZURA and will be financially compensated by the community, supplemented by fees collected from students at the beginning of the year. If not, private local contractors will have to be dispatched in the same manner. The community, along with the secondary school, will able to raise funds to pay for labor and repairs, if necessary, through existing income-generating activities such as the sale of fruits and vegetables by the school or from fees collected from students at the beginning of a term.

A new and permanent water committee will manage the collection of rainwater and the distribution network. Additional polyethylene storage tanks may be added using the same techniques and methods in order to ensure that more rainwater can be stored if needed.

Maintaining the rainwater harvest system will fall to a select few members of the community. Periodic cleaning of the gutters will be scheduled as well as the removal of water from the containers annually for maintenance. The project committee has also been trained in various emergency patching methods, to avoid exacerbating minor problems until proper repairs can be done.

Let Girls Learn
The desired outcome of this project is to provide the community with a dependable water source. The construction of a water harvest system will minimize health risks associated with waterborne diseases. The community will no longer have to rely solely on nearby wells should pipe-water becomes scarce.

Although not an official Let Girls Learn project, it will ease the burden placed on female students, as fetching water is a chore reserved for them. With this system in place, academic performances will certainly increase. Access to clean drinking water during the drier seasons will reduce water-related illnesses, which in turn will increase the productivity of students and the community as a whole.

Project Funding
This project is made possible through the generosity of an anonymous donor. 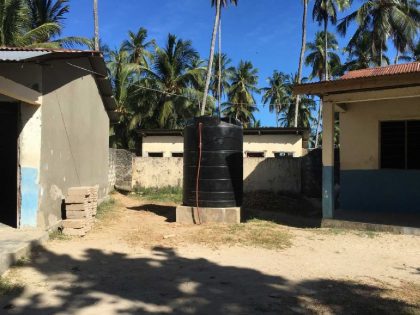 This project has been completed under the direction of Peace Corps Volunteer Tu Le.

The project was designed to establish a rainwater harvest system for the community.

The pipelines connect the new water tanks to an existing channel, which can be used as an additional source for water during the drier seasons. Water purification includes filtration of the gutters and chlorination of the underground storage tank. This now benefits the roughly 1,000 students enrolled in the secondary school and also nearly 3,000 inhabitants in the surrounding villages.

We extend our thanks to Tu for completing this important project.