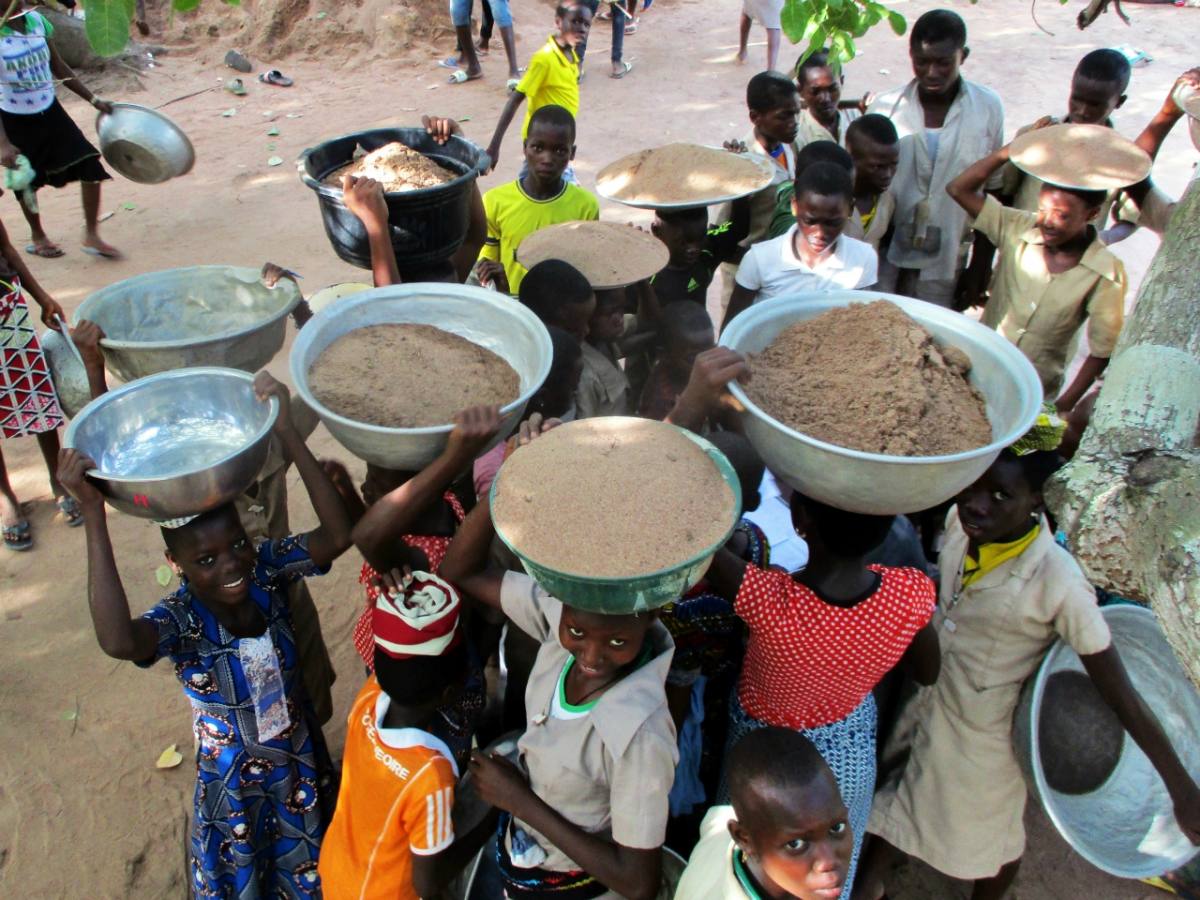 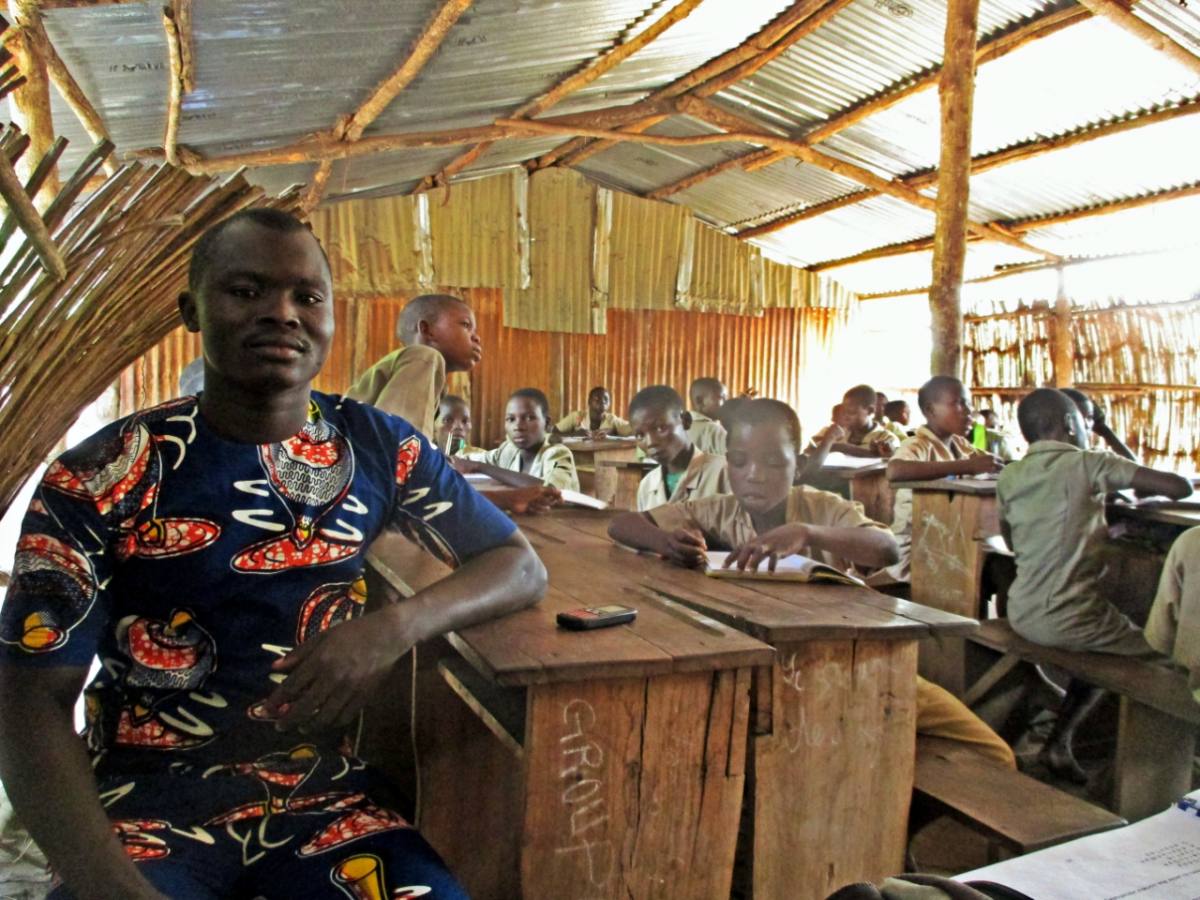 Community Description
The village of Xxxxxx is an agricultural heavy community and is located in the Collines department of Benin. The majority of the village’s inhabitants are farmers or tradesmen. The population of the Ouèssè area is approximately 19,000.

Xxxxxx is an isolated village situated 26 kilometers off the north – south interstate. The small dirt road from Xxxxxx to the interstate is surrounded by nothing but agricultural fields. Due to its rich, diverse, and considerable agricultural production, Ouèssè is known as the breadbasket of Benin.

This project will take place at the Xxxxxx 3 Middle School. The school is located on a large cashew plantation several kilometers from the heart of Xxxxxx. There is no electricity or water on campus. The school has 8 classrooms, 6 of which are tents with tin roofs and sand floors. The other two classrooms are unfinished concrete structures with two walls, a tin roof, and sand floors.

The Middle School has an enrollment of 650 students ranging from 6th to 9th grade. The school’s enrollment has continued to increase significantly every year since it was founded in 2012.

Problem Addressed
The school needs potable water on campus. There is currently no public water source available within 1.3 kilometers (0.81 miles) of the school. This distance of potable water from campus leaves students, teachers, and administration without access to drinking water during the school day. Consequently, students and faculty go all day without drinking water and often suffer from dehydration and headaches. This is especially dangerous during the hot season when daily temperatures reach 103 – 106 degrees Fahrenheit.

This lack of water also has serious consequences to hygiene and sanitation. Students and faculty have no means of washing their hands after defecating or before eating. This includes food vendors who are unable to wash their hands before serving food and cannot clean dirty dishes. The distance of water from campus has stymied attempts to install hand washing stations and hygienic practices at school. As a result, students sometimes fall ill and are forced to miss class. 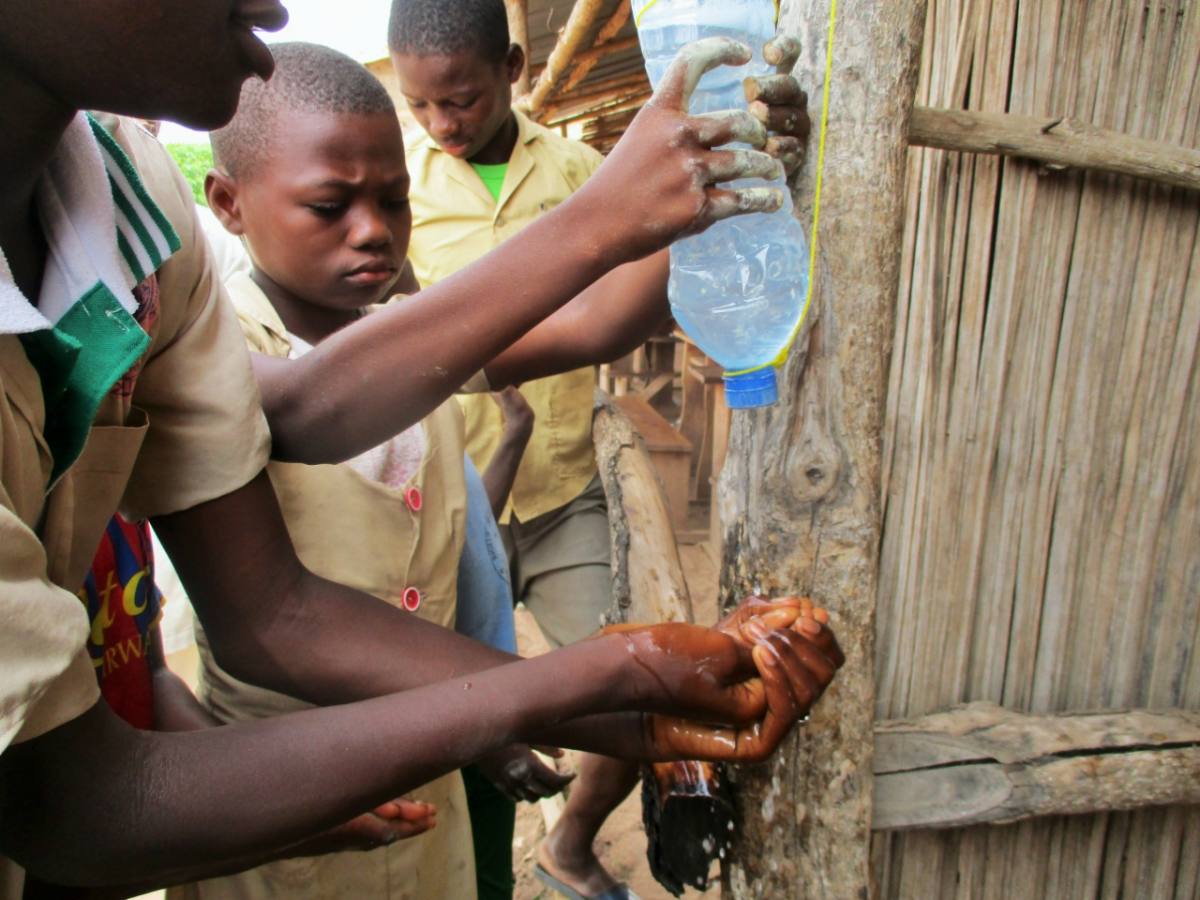 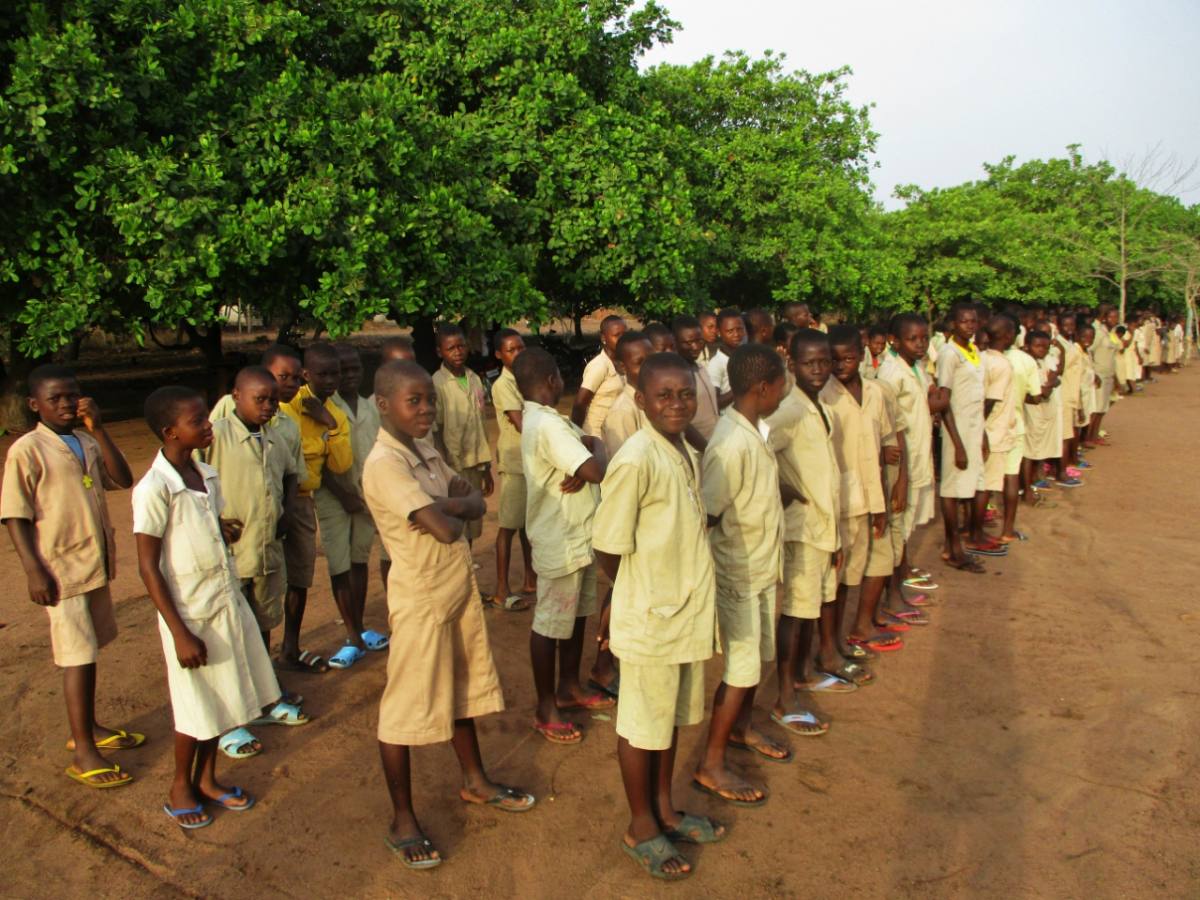 Project Description
This project will construct a water tap at the Xxxxxx 3 Middle School, which will provide potable water to the school and surrounding community. This will be done by extending a existing municipal tap to the school’s campus.

Xxxxxx has one water tower which provides the village with potable water. Water is treated and pumped up into the tower which services the village’s 15 municipal taps. There is currently a municipal tap at the Kpassa Primary School, one kilometer (0.63 miles) from the Xxxxxx 3 Middle School, which will be extended to the campus. A one kilometer trench will be dug and 2.5” polybutylene pipe will be used to extend the water service line. The new tap will be located on the campus, near the food vendors, and will include a hose bib and overhead tap.

The community recognizes and understands that this project requires substantial work and commitment on their part. The school administration has organized various meetings with the Parent Teachers Association (PTA), local leaders, as well as the school’s teachers and students. These meetings have 1) ensured the project aligns with the needs of the community 2) gauged community interest in, and commitment to, the project, and 3) clarified the community’s role and ensuring they can provide the necessary support to complete the project. The community has committed to doing all the project’s manual labor. This includes digging and backfilling the 1-km trench for the water service line and gathering sand and gravel. This in-kind contribution covers 33% of the total project cost.

Project funds will be used to purchase the necessary project materials, such as concrete, pipe, pipe joints, and faucets. The funds will also cover the skilled labor costs of the plumber and mason. The plumber will connect the service line to the existing tap, lay and join the pipe in the trench, and install the faucets. The mason will construct the concrete structure necessary to install the faucets.

Project Impact
850 people will benefit from the project.

Comments
Once the tap is completed, the availability of clean drinking water will continue to benefit the schools’ students, faculty, and the surrounding community. Students and teachers will be able to stay hydrated and healthier, allowing them to perform better in class. Local community members’ daily commutes to retrieve water will be drastically reduced.

The project will also empower the school to execute other projects, such as hand washing stations, health and hand washing sensitizations, and a school garden.

Funding
This project has been funded by an an anonymous donor.  A donation using the button below will be allocated to our next project in Benin. 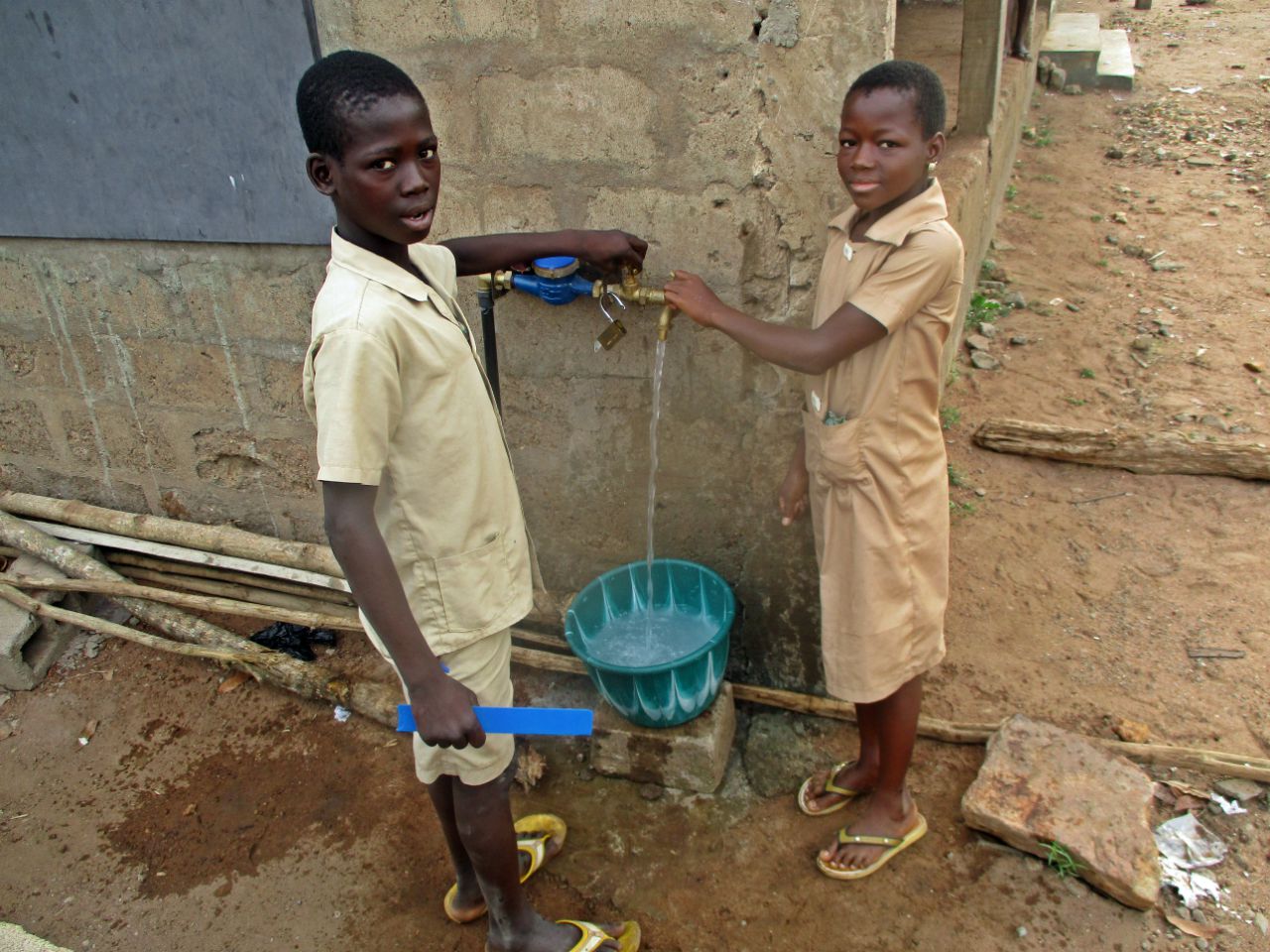 This project has been completed under the direction of Peace Corps Volunteer Troy Caruana. To read about the start of the project, CLICK HERE.

The project was designed construct a water tap at the school to provide potable water to the school and surrounding community by extending the municipal water line.

SCOPE OF THE PROJECT
During the month of October 2017, Ouèssè community members, including school administration of the Ouèssè 3 Middle School, contractor and tradesmen, village leaders, and 90 village volunteers came together to coordinate and execute the Ouèssè Commune water project. The community’s contribution of digging and backfilling a one-kilometer trench accounted for a third of the project’s total cost. 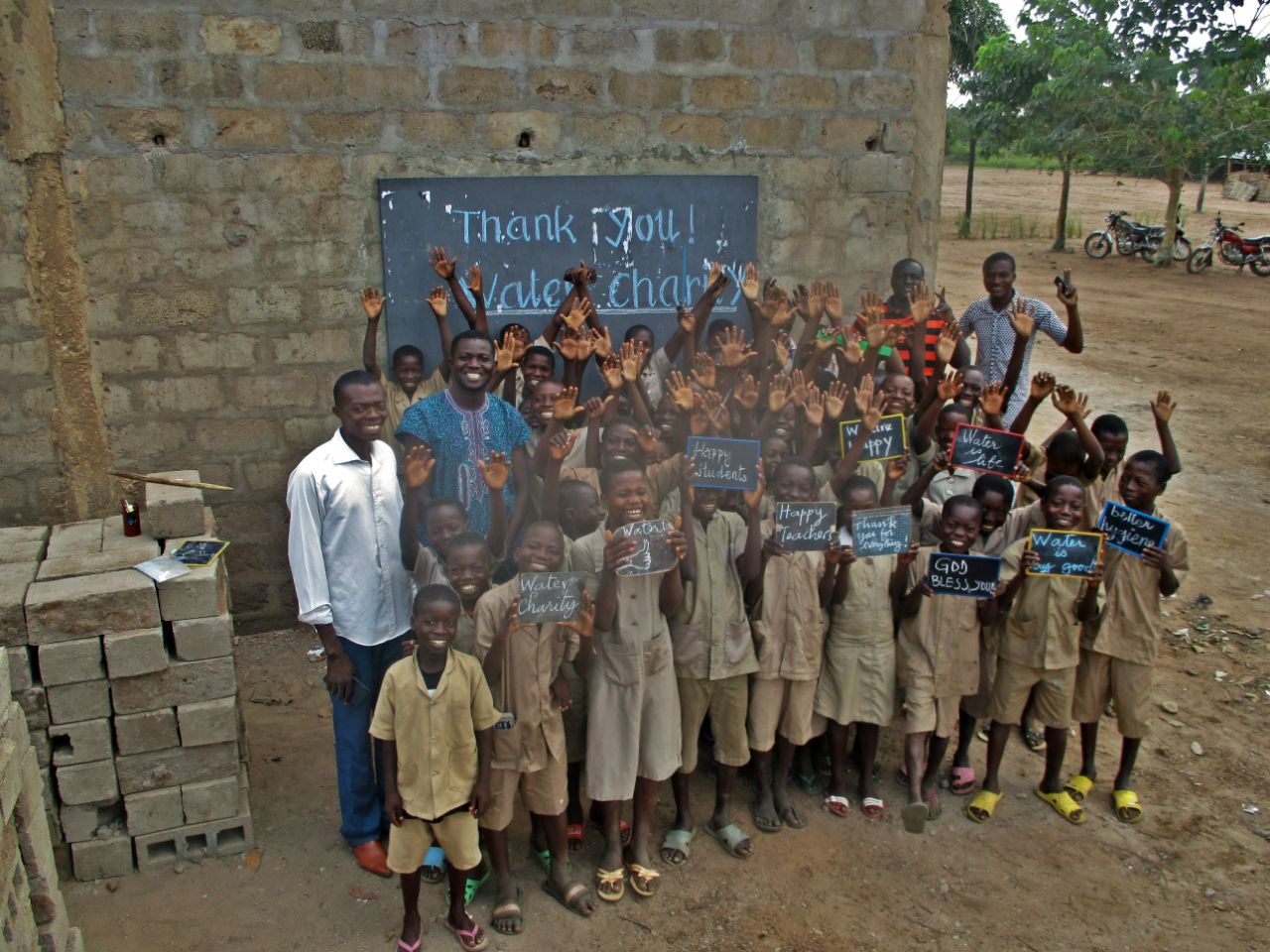 The project successfully installed a water tap at the Ouèssè 3 Middle School. This tap now provides potable water to the entire school community and to members of surrounding communities.

The completion of this project met our goals of 1) improving the school community, 2) increasing student success, and 3) disease prevention and promotion of healthy practices. The school is now a more suitable place for learning, as students and faculty have access to drinking water throughout the day. Students are able to stay hydrated and more focused on their classes. The number of students suffering from dehydration has already reduce drastically. In addition to improving student performance, potable water available on campus has already lead to the adoption of hygienic practices by the school’s vendors. Dishes are being washed after they are used.

The availability of water on campus has opened the opportunity for other projects to take place at the school’s campus. A WASH and gender equality project is already in its initial stages. Two female students are planning how to train the schools’ students, teachers, and vendors on the importance of, and how to, wash one’s hands. This project will also implement three or more hand washing stations around the campus. These hand washing stations will be up kept by female and male students equally.

SPECIFIC WORK THAT WAS DONE
This project successfully constructed a water tap at the Ouèssè 3 Middle School, which now provides potable water to the school’s staff and students as well as surrounding communities. This was done by extending an existing municipal tap one kilometer to the school’s campus. The one-kilometer trench was dug by 90 community volunteers. After the trench was dug, the local contractor was responsible for tapping the existing water main, laying and joining the one kilometer of 2.5” polyurethane pipe, and installing the faucet at its final location on campus. The same community volunteers were responsible for backfilling the trench after the contractor finished laying and joining the pipe. 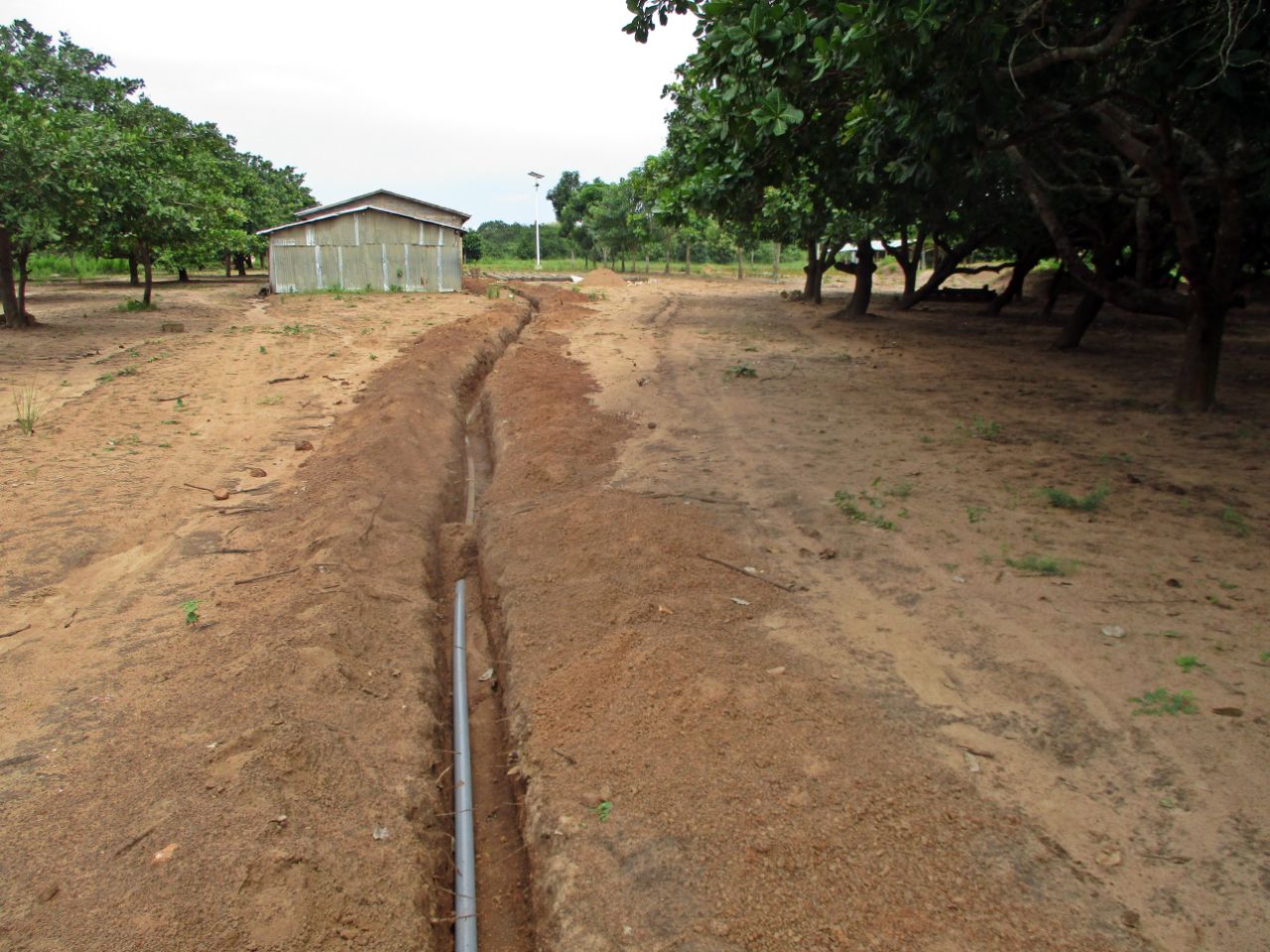 HOW THE WORK PROGRESSED THROUGH EACH STAGE
The initial planning stage of the project consisted of several meetings with the Ouèssè 3 Middle School administration, head contractor, and village leaders both individually and collectively. These meetings were to 1) ensure the project addressed the school’s most pressing needs 2) discuss project details and ensure the project was achievable, 3) gauged community interest in, and commitment to the project, and 4) clarified the community’s role in the project’s execution and ensuring they can provide the necessary support to complete the project.

In large part due to a thorough planning stage, the implementation stage did not encounter any significant holdups. Each party involved with the project understood their roles and how their roles were vital in the project’s completion. The materials were purchased and transported with the contractor and myself from Parakou, a major city 2½ hours from Ouèssè. Local leaders were able to coordinate ninety volunteers to dig the trench the following week. The contractor and his team of laborers were then able to lay and join the pipe and install the tap. After the contractor had finished, the community volunteers backfilled the trench.

The one hold-up this project encountered during the implementation stage was digging the trench. There was a rock formation of approximately ten meters in the line of the trench. Breaking through this rock formation added an extra day to the project.

END RESULT
This project successfully made potable water accessible for all the students and staff at the Ouèssè 3 Middle School. Members of surrounding communities are also able to gather water from the new tap on the school’s campus.

With potable water on campus, students can now stay hydrated throughout the day, allowing them to better perform in class and miss less school. During the morning and afternoon breaks, the school’s food vendors fill up large containers of water that students can drink.

The school vendors’ access to water has led to more hygienic practices. Vendors are able to wash spoons, plates, and cups after they are used. The vendors come to the school with large containers that they are able to fill free of charge.

Another result of this water project is that other WASH and gender equality projects can now take place at the Ouèssè 3 middle school. A student project lead by two motivated female students to implement a sustainable hand washing project at the campus is already under way. This project will include hand washing trainings for students, teachers, and school vendors, and the installation of at least three hand washing stations around the school. These stations will be up kept by both male and female students in the school.

Comments
Thank you immensely for working with our village and funding our project. The lack of potable water at the school I teach at has been a major barrier to healthy practices and education. I remember having to cancel English classes on several occasions last year because my entire class of fifty or more students was too dehydrated to participate by the end of the day.

Now that the students and staff have clean water, students can learn easier and teachers can teach better. My classes have been more active and participatory. In addition to the students and teachers, I have encountered multiple individuals living in the surrounding communities that have expressed their gratitude and have told me how this project has improved their quality of life and provided them with access to potable water. This project has had an immediate and immense impact on my entire community.

We extend our thanks to Troy for completing this important project. 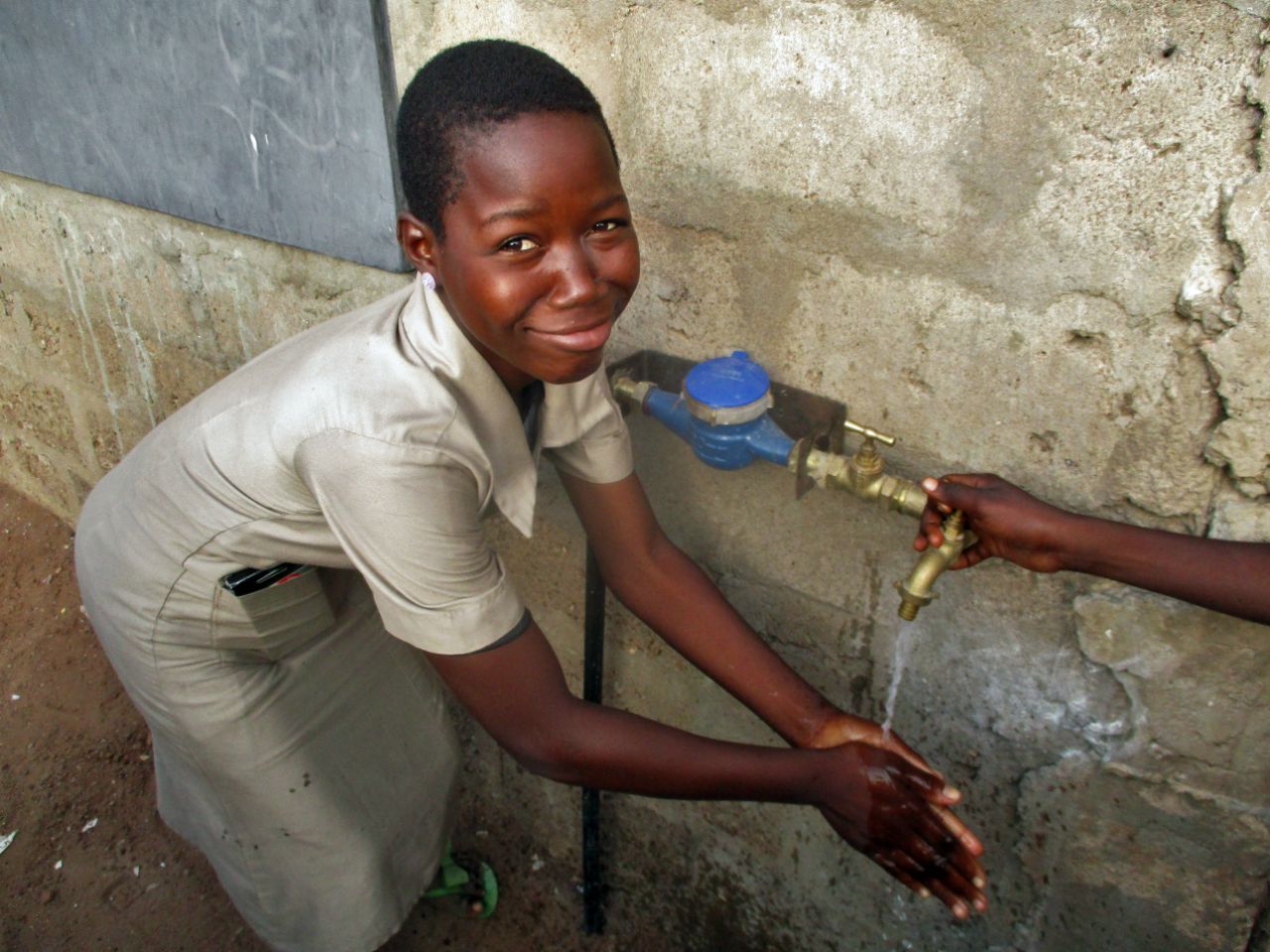 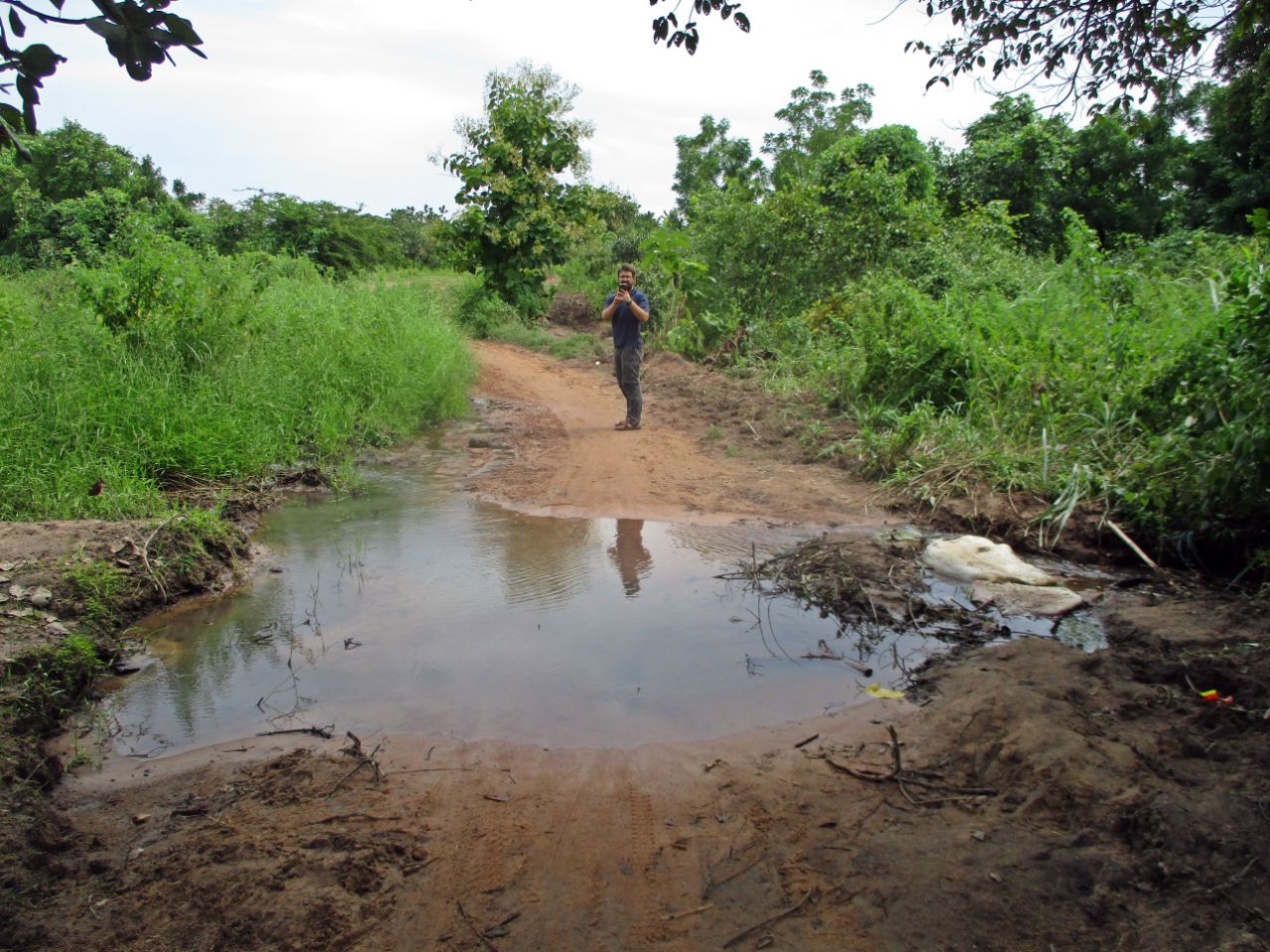 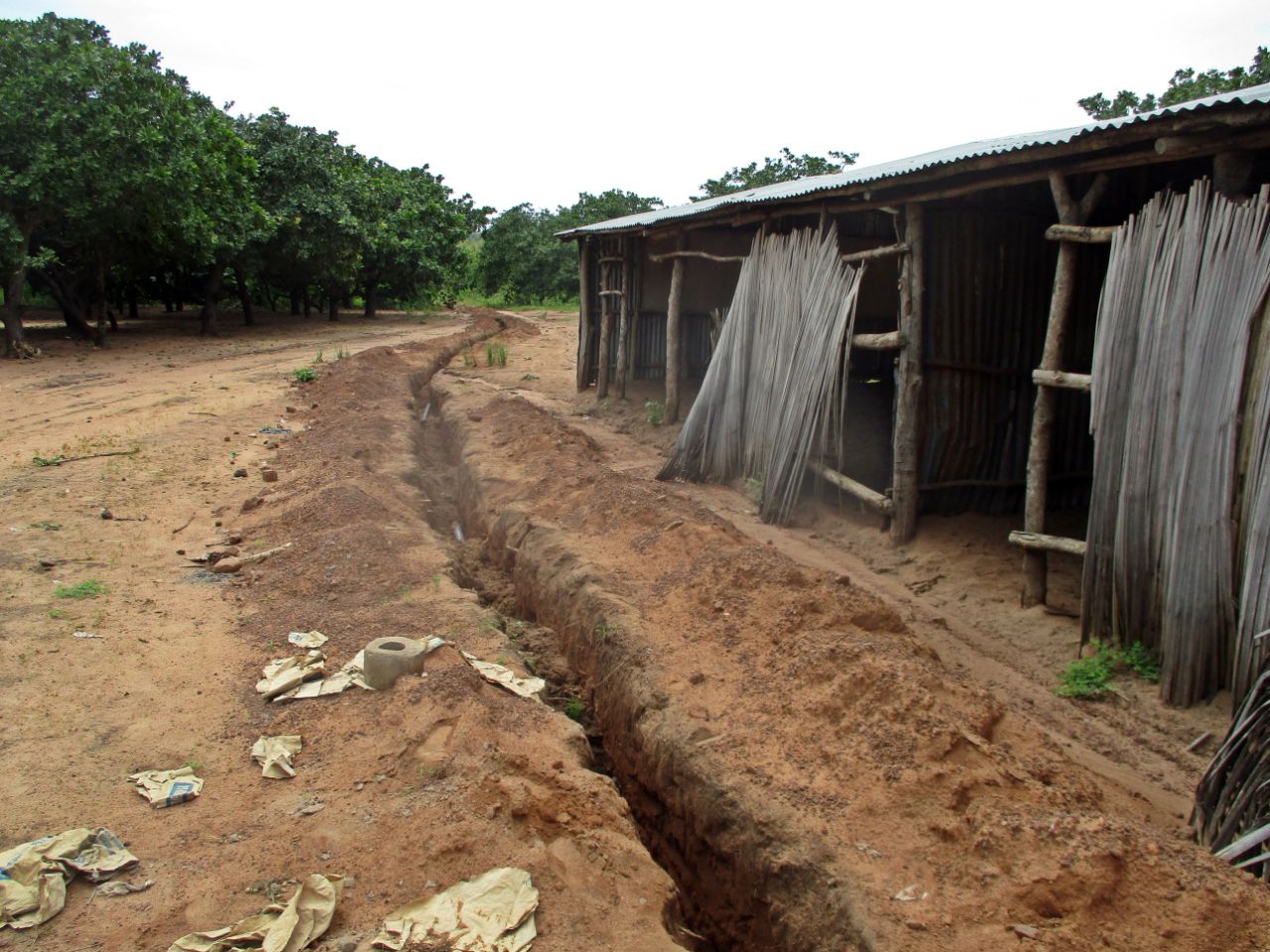 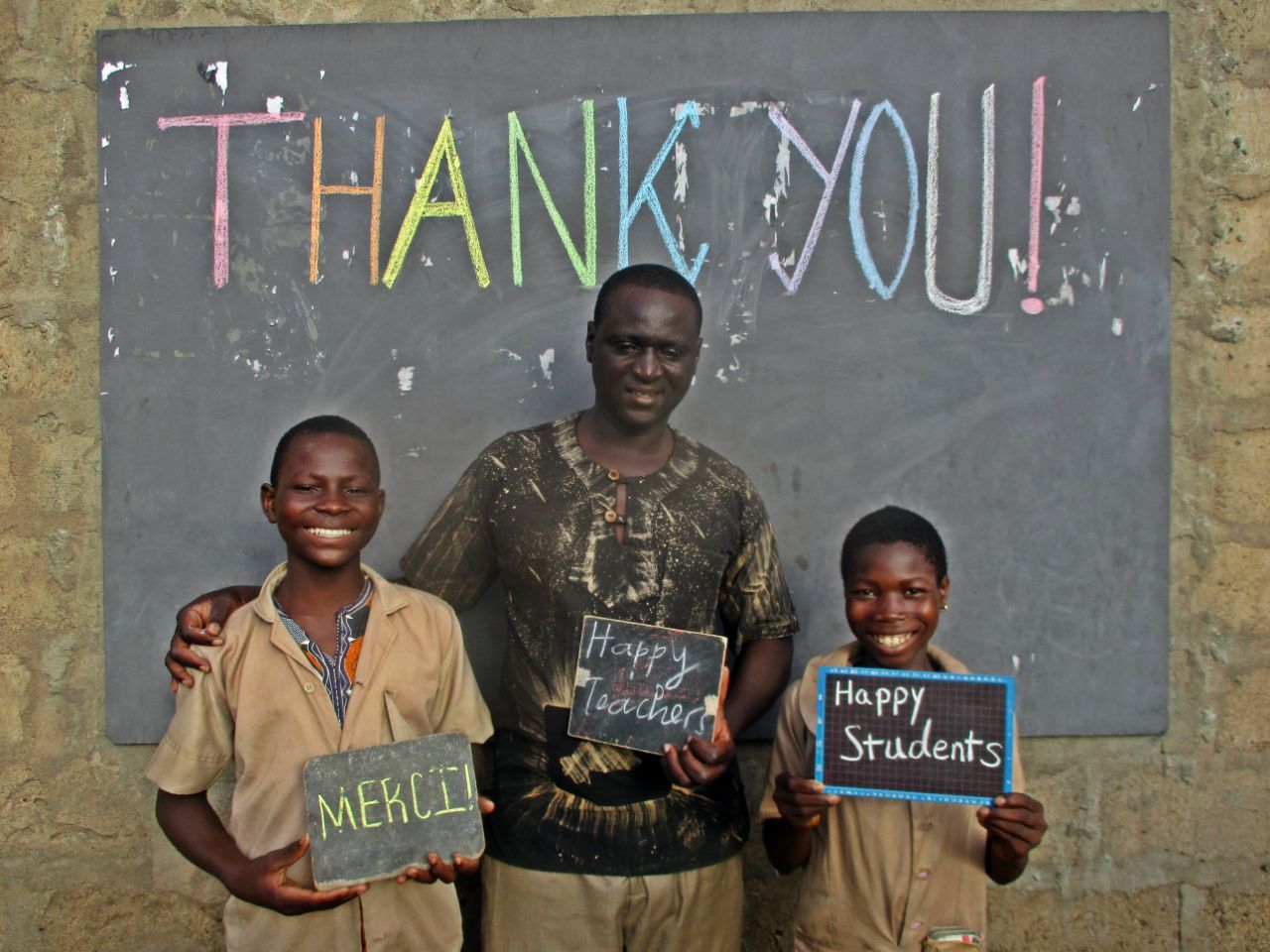