This project has been completed.  To read about the conclusion, scroll down below. 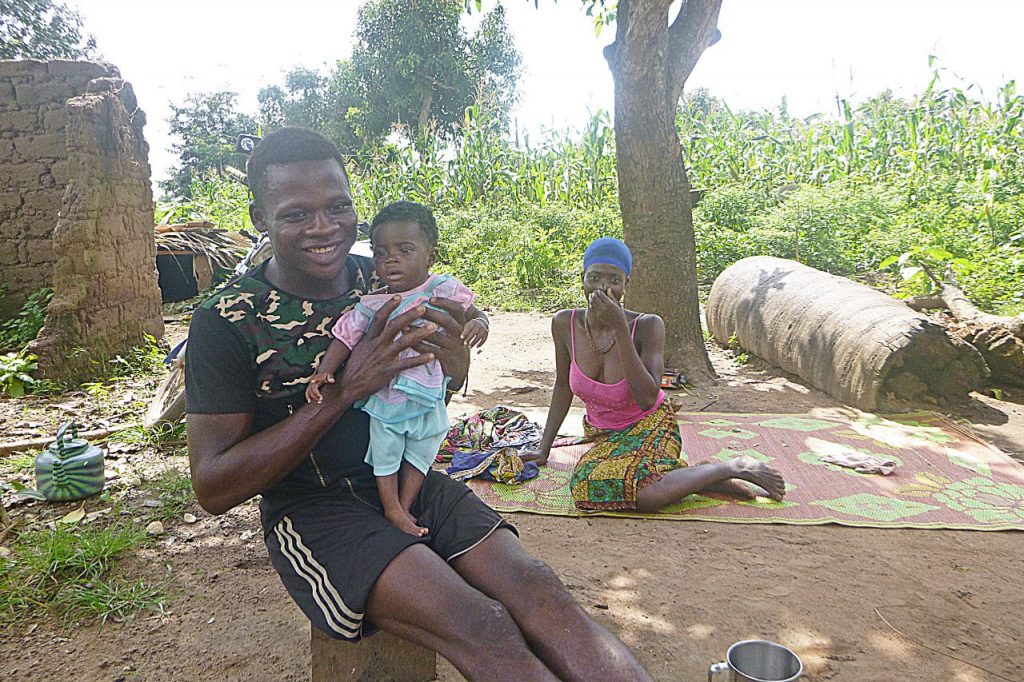 Community Description
The village of N’Tchourou is located east of Tchamba and within 15 kilometers of the Benin border to the east. The population of 4,000 inhabitants includes outlying villages, though the recent census does not account for a transient population of merchants and seasonal cultivators from Benin. As with many national boundary areas, relatives live on both sides of the border resulting in a rather “fluid” zone. Kabyé is the dominant ethnic group along with Losso, Lamba, Tchokossi, and both sedentary and nomadic Fulani. Electric power is provided by Benin’s hydropower network.

Livelihoods are focused around agriculture, with most of the population subsisting on the cultivation of maize, soy, and yams. Fertilizers are typically used in excess without much control and used frequently in the cultivation of maize. However, fertilizer is not readily available in N’Tchourou, resulting in what is perceived to be a poor yield crop. There is food insecurity during the months prior to the year’s harvest (June to September). 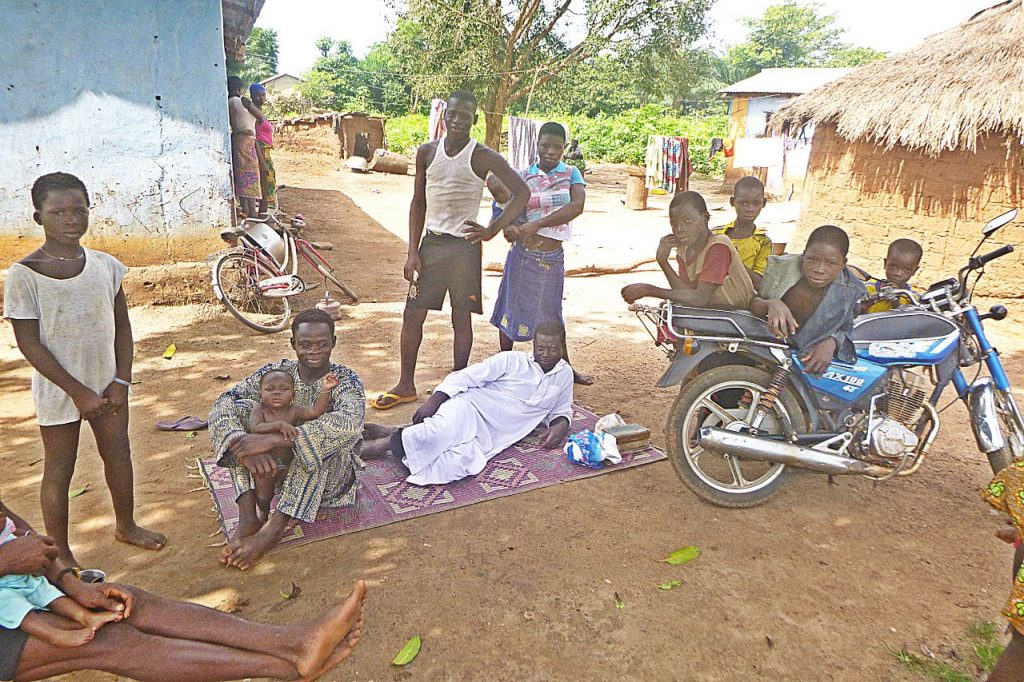 The village water source consists of two borehole wells installed in 1991 and 2000, five open, shallow wells (7-10 meters deep), and the area’s stream network. The shallow wells are dry during the mid-dry season, typically starting around February. Several Togolese NGOs have worked in the area including the Red Cross (latrines), and an NGO that trains community health workers, builds schools, and assists in youth and gender development.

The health clinic in N’Tchourou is one of the more basic health centers in Central Region. While there is electric power, the center lacks a refrigerator thus requiring the staff to make the 80-kilometer round-trip to Tchamba two to three times a month on a very primitive road carrying vaccines and medicines wrapped in ice on the back of a motorcycle. The area did not have a USP or health clinic (the most basic Ministry of Health designation) until 2012 when the current structure was built with the aid of a Togolese NGO and a German family. Since 2012 the clinic staff has not been consistent through the village has now grown to a size considered essential by the regional health department to receive state-assisted staffing.

Prior to the current clinic construction, health care was limited to services provided by locally trained community health workers operating out of a simple thatched, mud-brick structure. The clinic today is a 6-room cement building that lacks interior plumbing and a septic tank. The common illnesses treated are malaria, gastrointestinal, and respiratory illnesses. Births average around 10 per month which is low considering the population and may be attributed to a lack of running water at the clinic.

Problem Addressed
The main water source at the health clinic at N’Tchourou is an open, shallow well which is depleted during the dry season. During the dry season, staff and patients are required to haul water from an open well a kilometer away for cleaning and consumption. Water is made potable when treated with bleach which appears to be infrequently. Water used for cleaning surfaces is generally unsanitary. The lack of running water is particularly onerous for women giving birth as the female relatives are required to haul water during and post-birth for cleaning of the maternity room, utensils, and birthing cloth.

Project Description
This project is to build a borehole well for the clinic. Under the guidance of the Department of Hydraulics and Sanitation’s regional office in Sokode and with support from the Ministry of Health regional director, who identified clinics with the most critical need, and a local drilling company, this project proposes to drill a 60- to 100-meter borehole well at the N’Tchourou clinic, equipped with the following:

The submersible pump will be run using a gas-powered generator as there is currently no electric power in the community. (Note: clarify) The local drilling company selected, Plomberie Génerale de Réalisation de Forage, in operation since 1998 and based in Tchamba, has extensive experience drilling deep borehole wells throughout Togo and regionally in Burkina Faso, Benin, and Nigeria. 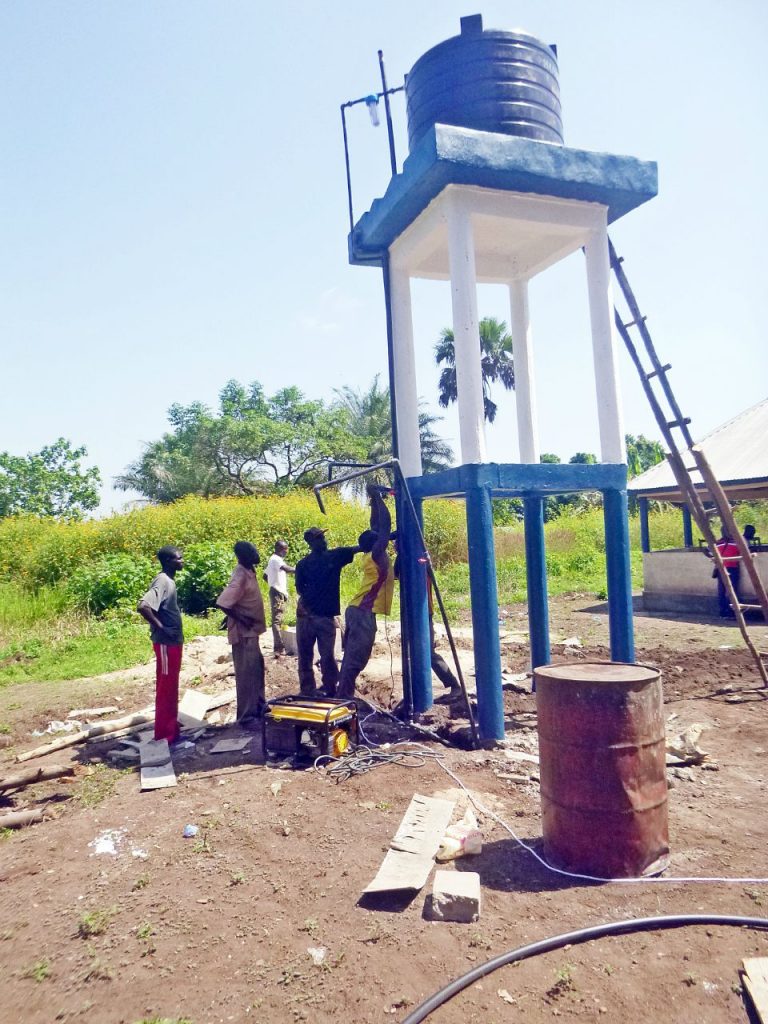 Project Impact
4,000 people will benefit from this project. 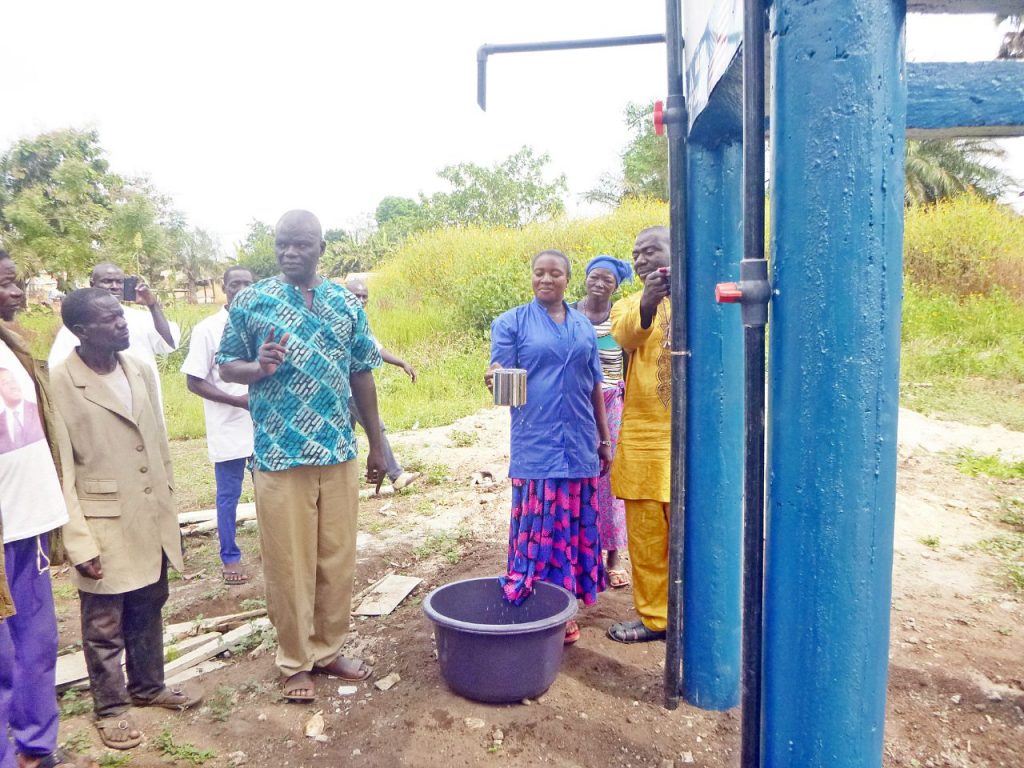 The purpose of the borehole water system project at the N’Tchourou health clinic was to address a lack of both potable and year-round water, either the absence of or non functioning indoor plumbing and the lack of hygienic disposal of afterbirth blood and tissue.

Following borehole drilling, a “pump test” was run to determine the well’s productivity and in turn the hydraulic properties of the aquifer. The pump was run for several hours at a rate like actual use and the declining water table (drawdown) was measured at regular intervals. The N’Tchourou borehole was drilled to a depth of 55 meters and has a yield of 3,500 liters/hour which is more than adequate to supply both the clinic needs and those of the surrounding households. The pump test also indicated a rapid refilling of the borehole, implying even when run at the maximum yield rate, the well should recover quickly and not result in significant lag times. Simply put, the hydraulic conditions of the well are favorable to ensure a sustainable water supply for many years to come (assuming the system is well maintained).

Numerous visits were made during the well installation by the Water Charity Coordinator and the government hydrologist to oversee construction and to ensure the clinic and community leaders understood the responsibilities associated with maintaining and ensuring a sustainable water supply. A final visit by the Regional Director of hydraulics insured the borehole well and the associated delivery system met all the driller’s contract requirements and functionality.

The N’Tchourou health clinic is located near the Benin border, down a difficult dirt road which in the rainy season is made all the more impassible by huge potholes, and while several NGOs have been present at various times, the health clinic had no year-round water, no indoor plumbing nor refrigerator, non potable seasonal water, and until 2016 a very primitive building – essentially a very neglected population insofar as health services were concerned.

The clinic serves a population of approximately 4,000 people, including the neighboring villages, who will directly benefit from a more hygienic health clinic.  While clearly not all of the population living in N’Tchourou will be accessing the well water for personal consumption, the community development liaison estimated perhaps as many as 2,000 inhabitants may utilize the well. The clinic anticipates seeing a rise in births as there is now running water and female relatives are no longer obliged to fetch water for the patient, in addition to an overall improvement in hygiene. The clinic staff will use access to potable water to encourage better overall hygiene, as most of the disease-causing bacteria in the community water sources are due to fecal transmission by both animals and humans. The clinic staff, particularly the midwives and their assistants (which often include female relatives) will be better protected against blood-borne diseases as afterbirth material (blood and tissue) will be dispensed in a rapid and efficient manner, significantly reducing exposure.

The Regional Director of the Department of Hydraulics stated in his technical report the N’Tchourou health clinic borehole well water system has fully succeeded in meeting both the local and national objectives for potable water. The Department of Hydraulics, the Ministry of Health and staff at each rural health clinic served by this project have repeatedly been astounded at the expediency with which funding was made available thus allowing work to begin within weeks of submitting the project request. Thank you, donors and Water Charity! The efficiency of work that followed was due in large part to the incredible efficiency, planning, and hard work by the local drilling company’s crew. The Regional Director and the hydrogeologist at the Department of Hydraulics and Water in Sokodé also contributed their time, vehicle and expertise to ensure all technical aspects of the project conformed to modern standards and have assured their continued presence as the borehole wells are now part of the national water database and monitoring program. Having the government of Togo involved from the beginning in this suite of health clinic projects, from the selection of health centers to technical oversight and continued monitoring by the Ministry of Water officials, has confirmed the importance of not doing community projects as isolated NGOs. This last point is critical to continued success as most water projects in Togo are implemented without government oversight, leading to a myriad of problems none the least being poor technical implementation and little to no continued oversight.

The N’Tchourou project was implemented in concert with five other health center water system projects, scattered over two districts – all of which were completed on schedule. The community of N’Tchourou offers its sincere thanks and gratitude to the donor(s) for this valuable water resource. As they say here “l’eau est la vie”. Water is life, and the cleaner the water the longer and more satisfying life will be! Un grand merci! 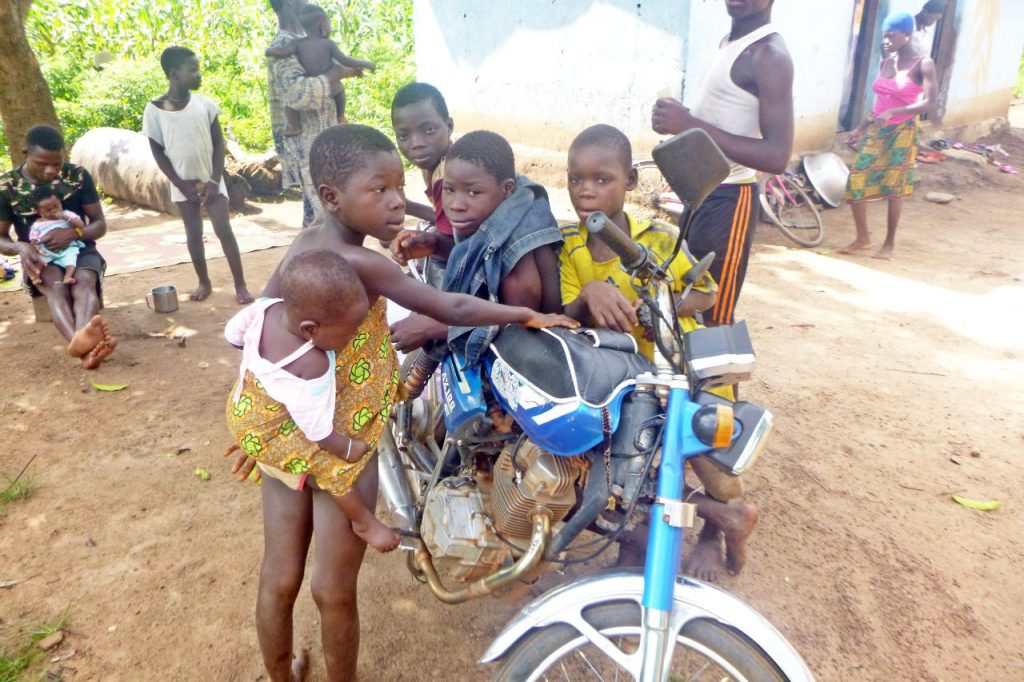