This project has been completed under the direction of Peace Corps Volunteer Jennifer Swanson.

The project was to repair and rejuvenate the existing underground rainwater holding tank and pipes located at Namiyonga B Primary School.

After receiving assistance from Water Charity, the process of repairing the rain catchment system could officially begin. The teachers and students had already created the beams which would be used to support the new roof of the holding tank. Once the school committee received the funds, they were able to buy the materials, including cement, tin roofing, and underground piping, as well as pay a small labor fee for local craftsmen. 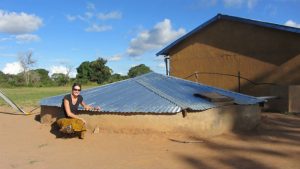 The repair and reconstruction of the holding tank took two weeks to finish. Cement was placed inside as well as outside the holding tank on existing cracks and crevices. The beams were then replaced to ensure a stronger roof. New clean tin roofing was placed at an improved angle in hopes of eliminating the rusting and formation of holes in the future.

The underground piping was placed to ensure that water will steadily flow into the tank when available, thus lessening the complete dependence on rain water.

The school committee was able to work together to plan, implement, and complete this project. Thanks to Water Charity, the students and teachers are ensured clean water year-round. Thank you SO much for the support!!

We are grateful to Jennifer for completing this project, and again wish to thank those who donated for the effort. 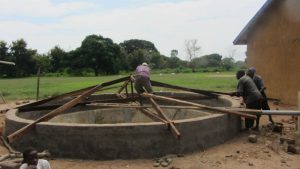 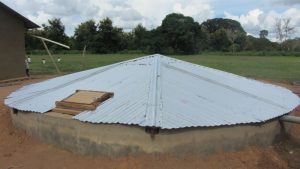