This project has been completed under the direction of Peace Corps Volunteer Justin Mattison.

The project was designed to build a well in the community. To read about the beginning of the project, CLICK HERE.

A summary of Justin’s report is as follows: 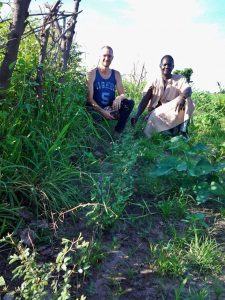 The labor crew that was previously selected during the design process broke ground before funding was in place because they were worried about the approaching rainy season affecting construction.

The president on the women’s group and the women themselves took turns providing lunches and tea for Njay and his labor crew. The children of the group members excavated and transported all the sand needed for the cement mixture.

The well was 18.75 meters deep when Ramadan began. Ramadan is the Muslim holy month marked by daily fasting (no food and no water) from dawn to sunset, increased religious observance and self-reflection. The daily rhythm of Mouye, a 100% Muslim village, drastically changes during this holiday.

The project was more than half-way complete but the rainy season was approaching, and due to arrive before Ramadan was over. Rain was already reported falling in southern Senegal and it was slowly moving north. However, work continued at a fast pace by some workers who postponed their religious duties for the sake of the project.

The well was 23.65 meters deep when the rains came. The night before the rain, the dirt at the bottom of the well was extremely wet and the labor crew guessed that they would hit water in the next two meters. The crew covered the top of the well, anticipating the coming rain. The first major rain of the season was long and dropped a considerable amount of rain. When the PCV and the labor crew visited the well the day after, there was over a half meter of water at the bottom. 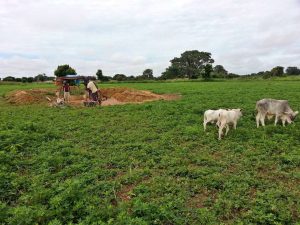 Before the rains had come the president was eager to start cultivating the land and begin planting the trees that would make up the following agroforestry technologies: live-fence, mango plantation, alley-cropping and wind-break. A 15,000+ tree nursery of fruit and forestry species had been established and maintained since the first of April. The group erected a dead-fence all the way around the one-hectare piece of property. This was a huge investment of time and labor, proof of their enthusiasm.

Once the fence was created they out-planted thorny, nitrogen-fixing trees along the entirety of the dead fence at 5 cm spacing. This live-fencing is a significant investment in the land and will provide the property with protection from cattle and goats in two years when the trees reach sufficient maturity.

After out-planting the more than 20,000 trees that make up the live-fence, the group out-planted 100+ mango saplings that they had created in their giant tree nursery. Beside the mango, they also out planted 2 banana trees, 15+ citrus, and other fruit species. The trees that they planted were all at the appropriate spacing to allow gardening in the “forest-garden” style. 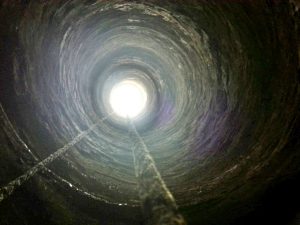 Around the end of rainy-season it became apparent that the water table had, in fact, not been reached. The water in the well began to lower and issues arose.

During the cold-season (November-February) they continued their maintenance of the fruit trees and live-fencing trees that they out-planted in the rainy season. Also, they began planning the agroforestry projects that they wanted to complete in the upcoming year.

A new PCV, Rhiley Allbee, began working in Mouye. Since that time, the president and his children have constructed another large tree nursery to continue the work in the garden space and are maintaining the dead-fence to protect the trees that were out-planted last year.

About 4 buckets of water can be pulled out of the well every day before the well runs dry. Despite the additional work needed on the well to make it viable, the women are highly motivated and eager to continue.

Rhiley is working with Water Charity to develop a program to address all of the needs of the community. This will include the deepening of the well to provide water needed for the irrigation of the trees and gardens to improve the food security of the families.

We are grateful to Justin for his work on this project.