Water Charity is thrilled to announce its sponsorship of Moringa Ride – Togo. Moringa Ride’s objective is to promote awareness about, and help proliferate the use of, the Moringa tree as an important tool to help combat malnutrition.

Water Charity believes that the extensive cultivation of the Moringa tree throughout developing nations will play a key element in reducing malnutrition in the world in coming years.

The objective of Moringa Ride will be accomplished through the efforts of Peace Corps Volunteers and Togolese counterparts. Eight Volunteers and eight Togolese will ride bicycles to thirteen selected villages and towns in the northern Savannah region of Togo.

At each community, they will teach the villagers the benefits of the Moringa tree and instruct them in the cultivation of the plant. They will disseminate seeds and help with the initial crop.

The trip will take three nights and four days, covering 30 to 40 kilometers each day. It is being led by Peace Corps Volunteer William Vu.

The Savannah region shares some of the same Sahelian semi-arid climatic conditions as its neighbors Ghana, Burkina Faso, and Benin. It is ranked as the country’s poorest region with 90 percent of the population, more than 650,000 people, either unemployed or earning only a fraction of the average $360 per year annual income. Malnutrition is prevalent in this area.

The Moringa tree is often called the “Miracle Tree”, as it is so high in nutritional value. Almost every part can be used for food or has some other beneficial use.

The leaves are a significant source of beta-carotene, Vitamin C, protein, iron, and potassium. The leaves can be eaten fresh, cooked. or dried and crushed into a powder.

The Moringa seeds yield a useful botanical oil. The seed cake that remains may be used to purify water, and can also serve as a fertilizer. In addition, the bark, sap, roots and flowers all have beneficial uses

The presentation to each community will include an explanation of the importance of proper nutrition, and how Moringa fits into overall health. The usage and preparation of each part of the tree will be taught.

Each village will be given 200 Moringa seeds to start a tree nursery. This will jumpstart the community to grow its own Moringa trees, and will leave a sustainable legacy from the ride. 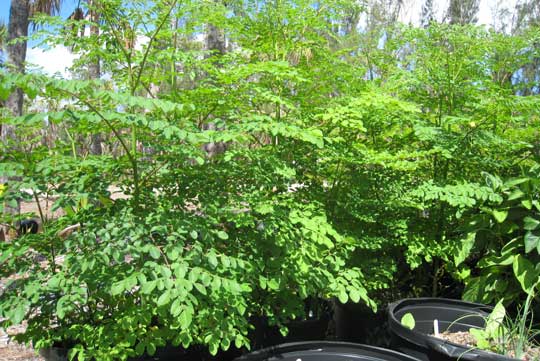 This effort includes a large undertaking on the part of the communities that are visited. Each will provide a selected parcel of land to start the first Moringa nursery. Local villagers will be responsible for the upkeep of the planted trees as well as sharing the technology with others in the community.

It is estimated that at least 100 people will participate in this project in each of the 13 villages, so 1,300 people will directly benefit.

We are extremely pleased to play a part in this great effort. Hundreds of people in 13 communities will benefit directly from the ride, but the significance of the undertaking far surpasses the immediate result. It will demonstrate a methodology for continuing to spread the concept of the beneficial use of the Moringa tree to the rest of Togo, the other African nations, and the world.

To read a progress report on this project, CLICK HERE