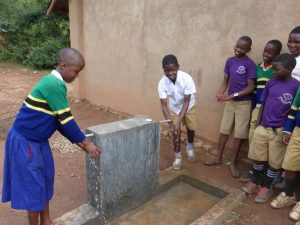 Community Description
Mhezi Village is in the Same District of the Kilimanjaro Region. The village has a population of around 2,000 people and borders four other villages with about the same population.

Mhezi is a farmland community in the forested part of the Pare Mountains. The major crops that are grown include sugarcane, corn, beans, cabbage, tomatoes, bell peppers, and avocados. All of the produce is sold to the local market and to the district market, which is 4 hours away by public transportation. Mhezi has two rainy seasons, which the farmers depend on for watering their crops.

Problem Addressed
The Kweresha Primary School and Chanjagaa Secondary School both have water and sanitation problems. The village built irrigation and spring systems which allowed access to water closer to the schools. However, this system often turns off at inconvenient times because they rotate the irrigation flow to other parts of the village.

In addition, students have to leave in the middle of school to get water for the kitchen staff or to water the plants around the school. The other spring is a half-hour walking distance round trip. Students get just enough water for the task at hand and not enough for handwashing for 300 students.

This situation brings two problems: (1) Leaving during class results in less time for students to study, and (2) minimal access to water results in sanitation problems and students becoming sick more frequently. This results in an absence from school.

Project Description
This project is to build a rainwater catchment system, a storage tank, and a handwashing station at each of 2 schools.

At each school, a 4,500-liter tank will be built near the kitchen using a ferro-cement design. A wire mesh frame will be constructed in the shape of the tank, then waterproofing cement will surround both the inside and outside of the frame.

At each school, the handwashing station will be near the Tank and use gravity to provide water from the tank to the two spigots. In addition, there will be a third spigot that is close to the bottom of the tank to easily fill buckets for the kitchen staff to use to wash dishes or boil water for cooking. The tank can be filled by either rainwater or the nearest well to the school.

This type of tank has been constructed in another village, and so there are experienced construction workers to come out with two other staff members to build the tanks and handwashing stations.

Project Impact
630 people will benefit from the project.

Monitoring and Maintenance
The kitchen staff will monitor the tank every day. At least once a year, around the end of the dry season before the rainy season, a member of the village or school will clean inside the tank. This will help keep the water clean. At this time the person will also inspect the spigots and the tank for leaks, and fix any leaks that they come across.

This project has been funded through the generosity of an anonymous donor.

This project has been completed under the direction of Peace Corps Volunteer Meredith Emery.

The project resulted in the construction of a rainwater catchment system, a storage tank, and a handwashing station at each of 2 schools.

We extend our thanks to Meredith for completing this important project.