This project has been completed under the direction of Peace Corps Volunteer Alina Dallmeier.

The project was to build stand taps in seven new sites in Mboh. 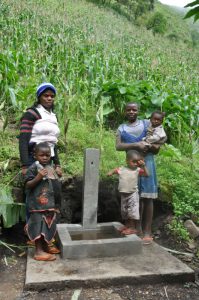 The Mboh water project has been successfully completed!

After the funds arrived, I notified the community and a meeting was scheduled to discuss our work plan. Over 100 people showed up!

I then purchased all of the materials for the project in the closest town (Fundong) with the technician. All the materials were then transported an hour and half to the village by motorcycles and passing trucks. We had just enough money to cover all the costs.

Work began slowly due to rain but after two weeks of hard work the seven stand taps are finished!

The villagers all came out to help dig the trenches for the pipes. The seven stand taps are connected to the existing water catchment that comes from a local spring.

There was an issue with getting permission from the Mayor to connect the new stand taps with the current water source, but that was resolved and water is now flowing!

The people of Mboh have been really excited to get the new stand taps. They no longer have to travel as far to get clean water! I know they are extremely grateful for the funding from Water Charity, and I extend their thanks!

We are grateful to Alina for completing this important project. We again extend our gratitude to the Paul Bechtner Foundation for providing the funding. 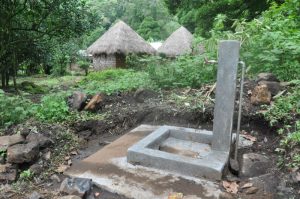 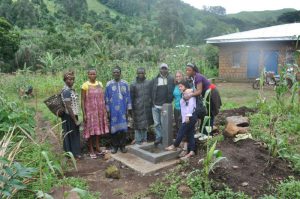