This project has been completed under the direction of Peace Corps Volunteer Susan Goodson Fatherree. To read about the beginning of the project, CLICK HERE.

The project was to build a handwashing station and at the school. 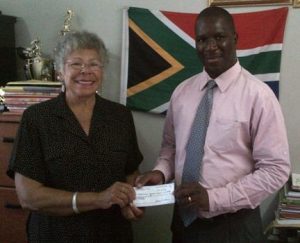 In 2013, funding for this project from Water Charity NGO, was leveraged to secure additional matching funds from the school district of Mbazwana and an anonymous American donor.

Three areas in the school desperately needed improved sanitary conditions: the kitchen had no sink or running water, the 2 drinking water taps had to serve 1,200 primary learners, and the 4 toilet buildings were in ruins and totally unhealthy.

We began to look for a contractor who could do all the work within our budget…ha!!! Many months later and four bids of agony, we got a signature on a contract! The rainy season was ensuing and school was not yet out, but the contractor got busy by the first of November and determined to have the work completed by January 15th.

It was now 2014. The project was eight months behind schedule of the expected completion date of our funders. But we couldn’t give up that the project would come together and benefit not only the students, but suddenly it started to take hold on the teachers that a new opportunity was brewing.

As school begins, a workshop will be held to train the teachers how to sustain the new improved healthy environment for the learners. The campaign was initiated by the principal who recognized the teachers have to train the learners about healthy toilet habits and the importance of washing hands and eating containers. The campaign includes having the local clinic help facilitate the educators workshop and to also hold a workshop for parents.

A local NGO will sponsor toilet troopers from the community who will assist students as they go into the buildings making sure they remember to use toilet paper and wash hands. The students will also paint the outside of the four buildings with murals that promote keeping MPS a safe and healthy school environment. Studies have shown that when the sanitary conditions of a school are in order, it increases the learning attitudes of not only the students, but also motivates the educators and staff as well.

As a new school year begins, an entire school community will take hold of an opportunity to learn the benefits of having and maintaining a healthy school environment with water in the kitchen for the cooks to wash food and dishes, a new water trough with 6 taps near the kitchen, and a new water jojo that feeds running water into both, and four renovated toilet buildings with 40 working toilets, new concrete sink fixtures, and septic tanks that have new piping for proper performance. NO MORE FLOODS!

The MPS community extends heartfelt appreciation to the patient donors who made this water movement possible. What a way to start a new year! The taps go on, the water is pumped into the jojo, the painters come, the grass gets cut, the learners show up next Wednesday…. 1,200 + will be very surprised!!

We are grateful to Susan for completing this project. She joins the list of Water Charity Superstars for her unique accomplishment: She is the first PCV to complete a project in each of two countries!