This project has been completed under the direction of Peace Corps Volunteer Jeffrey Deppa. To read about the beginning of the project, CLICK HERE.

The project was to build a 1,200-liter water storage tank at MATI.

The water tank building project using plastic bottles was very successful. Not only did the project get completed, but we went under budget! The extra money was used to help refurbish an existing water tank in the village that was in disrepair.

Close to fifty people took part in some aspect of the project. Everyone was very enthusiastic about learning how to use plastic bottles in a new way. The Tanzania Ministry of Agriculture has just compiled a report requesting three million 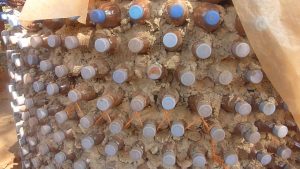 shillings to do a similar project of this sort at the national agricultural fair in August of this year after witnessing the success of our project.

Two neighboring villages have started collecting plastic bottles with plans of following the example set by our project. There is even the potential for the evening news to come film the tank!

Last but not least, this tank will provide a stable source of clean drinking water for the local residents.

Thank you Water Charity for your support!

We are grateful to Jeffrey for completing this important project.