This project has been completed under the direction of Peace Corps Volunteer Rebecca Roberts.
To read about the beginning of the project, CLICK HERE. 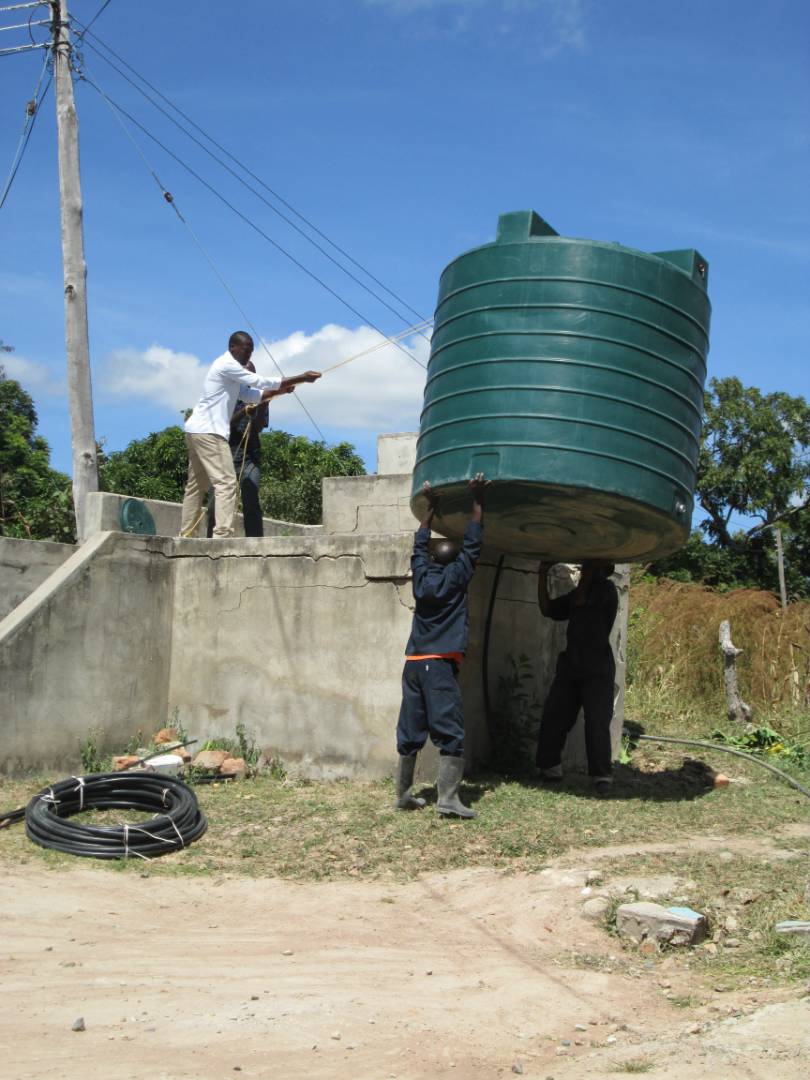 The grant to support the “Mansa District Health Centers Pump Project-Zamiba” provided electric water pumps to five rural health centers within Mansa District, including Kabunda, Mantumbusa, Mabumba, Mibenge, and Ndoba Rural Health Centers. It created running water to increase sanitation, especially to maternal cases delivering at the clinics. The Mansa District Municipal Council, along with community health volunteers volunteered their time to installation of the water pumps. To increase sustainability, the community health workers along with skilled health workers (Environmental Health Technicians) were trained in general upkeep and to make minor repairs to the electric pump. This project will reduce maternal sepsis cases for Mansa District, as well as encourage more women to deliver at the clinic in a safe and sanitary environment.

The installation of electric water pumps in Mansa District, Zambia initially hit some hiccups in its implementation plan and timeline. After ordering the pumps from our supplier, Saro Agro, we were informed that the supplier was out of stock of the pumps we had ordered and would inform us when they restocked. We looked at other options for pump suppliers, but ultimately decided that we wanted quality pumps (only Saro Agro provides) that were going to last a long time for the clinics.

After waiting several months, we were finally informed that the pumps had been restocked. We received a new quote that was a higher amount than originally quoted. Prices had increased since the initial order. We spent several weeks negotiating the price with the supplier and making adjustments to the supply list. One thing we were not able to negotiate was the shipment of the supplies. We were originally told that the shipment of items would be free, but when it came time to order, they told us it would cost an additional 3,000 kwacha (around 420 dollars) to ship the items to Mansa. We made arrangements with the Peace Corps-Lusaka office to pick up the items in Lusaka and bring them to Mansa when a cruiser was coming up country. This took about a month and two separate trips. Finally, we were able to begin the implementation of the project. 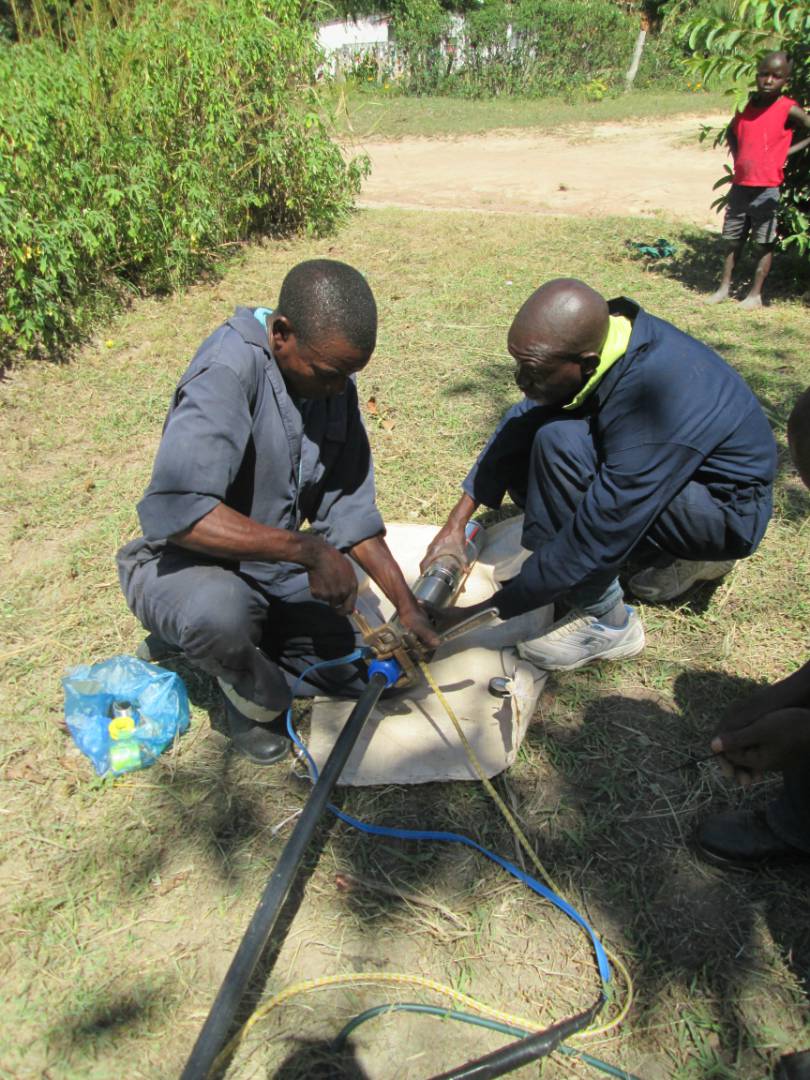 We started our implementation plan at Kabunda Rural Health Center. Immediately upon arrival, we saw that the structural integrity of the pump stand had been compromised by the heavy rains from the past month. After further inspection, we saw that a papaya tree had rooted under the stand and had cracked the foundation. With the help of the Mansa District Health Office and the Kabunda community, we broke down the existing structure and built a new one, using most of the bricks from the original structure and the metal piping from the old borehole system to reinforce the structure. This took two extra days than were originally planned.

Other than the stand, the installation went smoothly. The old system from the borehole was removed. The trench for the electric and plumping to the pump and clinic was dug by community volunteers. The pump was installed and tested, while the electrical work was done simultaneously. A garden tap was installed, so that the community could continue to use the clinic as a water source. The community was very happy to have running water and many expressed their gratitude to those involved in the implementation.

The next pump installation took place at Mantumbusa Rural Health Center, where all the structural components maintained their integrity. Installation was similar to that of Kabunda and finished in three days. Some of the piping that was originally installed by Zambia Prevention, Care and Treatment had been cut by those maintaining the grass behind the clinic, so minor repairs had to be made to the existing piping system.

While installing this pump, a young 17 year old girl, Agness Mwape, was giving birth to her first child, a daughter. She choose to name her daughter Amenshi (the local word for water), because, “Water brought me a healthy child today!”

Mabumba Rural Health Center was the third center to receive the electric water pump. Installation techniques remained the same and the clinic was finished within three days. Some of the existing system had been damaged over time, so the clinic put in application with the District Health Office to have those repairs made. Many of the children from the community were happy to help with small tasks for this project. Once the pump was installed, one child said, “Thank you for bringing us water!” 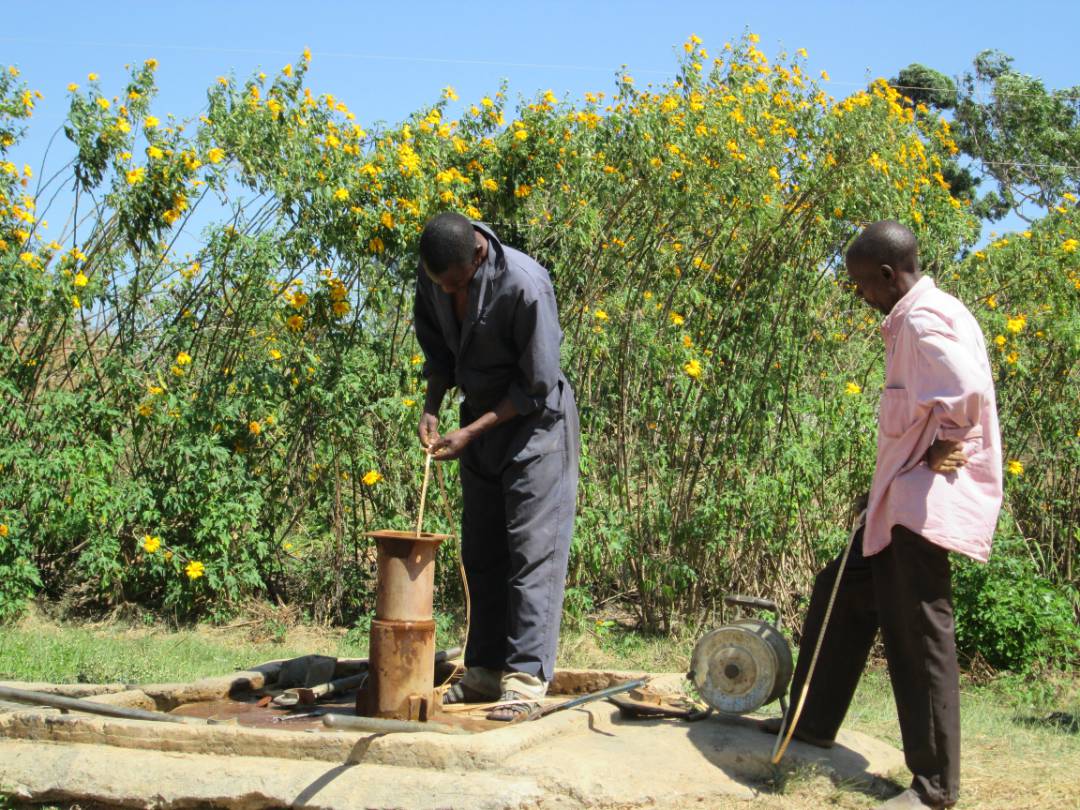 After a delay in installation due to other obligations of the Municipal Council, the work continued in Mibenge. Installation continued normally, although some piping inside the clinic had to be repaired. Although funds were running low at this point because of unforeseen expenses, the Mansa District Health Office, donated the additional funds needed to finish the project.

The final clinic to receive installation of the water pump was Ndoba Rural Health Center. Ndoba had a metal stand, so we reinforced the top of the stand using the piping from the old borehole system to ensure it could withstand the weight of a full water tank. All other installation proceeded as normal. The Safe Motherhood Action Group for Ndoba was having a meeting on the first day of installation. They thanked the installation team for the gift of running water by sharing a meal, singing and dancing.

Electric water pumps were installed at all five clinics, creating running water for 53,819 community members. Community volunteers and staff from each clinic (14 in total) were trained in upkeep and making minor repairs to the water pumps by the Municipal Council. These volunteers were also an integral part of installing the water pumps. Twenty-four service health providers have an increased capacity to provide more sanitary and safe health practices to their patients.

The District Health Office has agreed to take over in the continued monitoring and evaluation of community health indicators related to the installation of the pumps.

We would like to thank Rebecca once again for executing this enormously-successful high-impact project  We also extend our gratitude to the other PCVs and RPCVs doing projects under our East Africa Water & Sanitation Program. 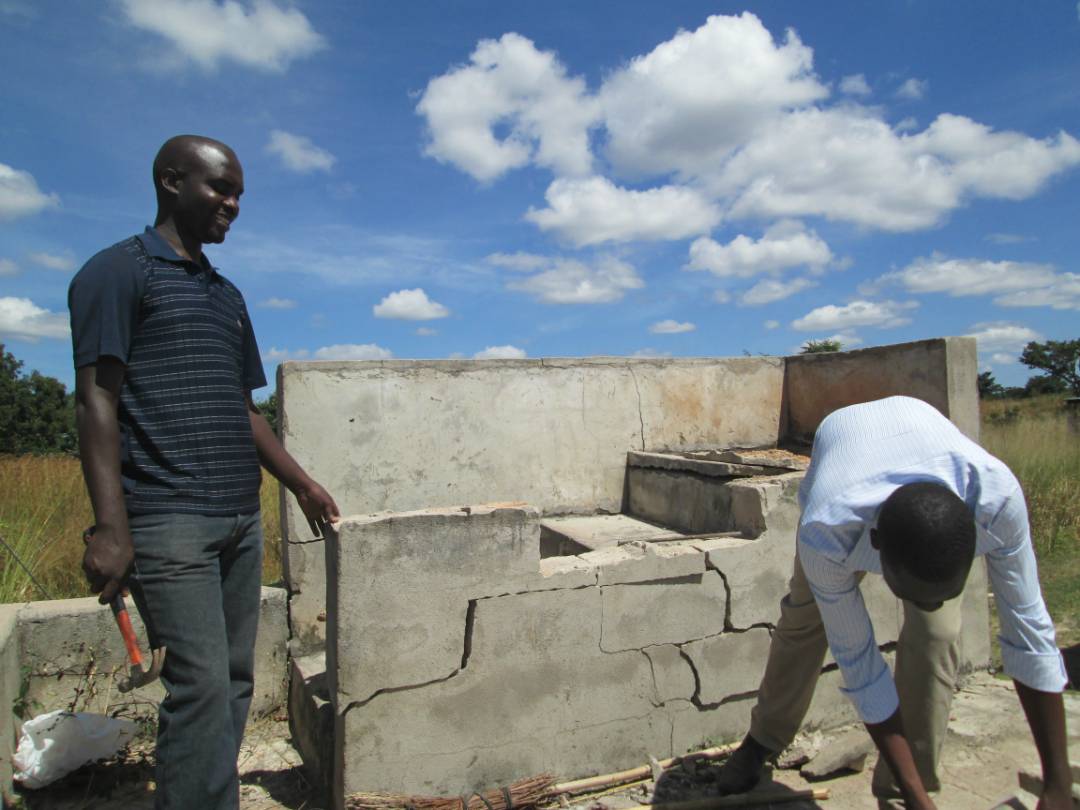 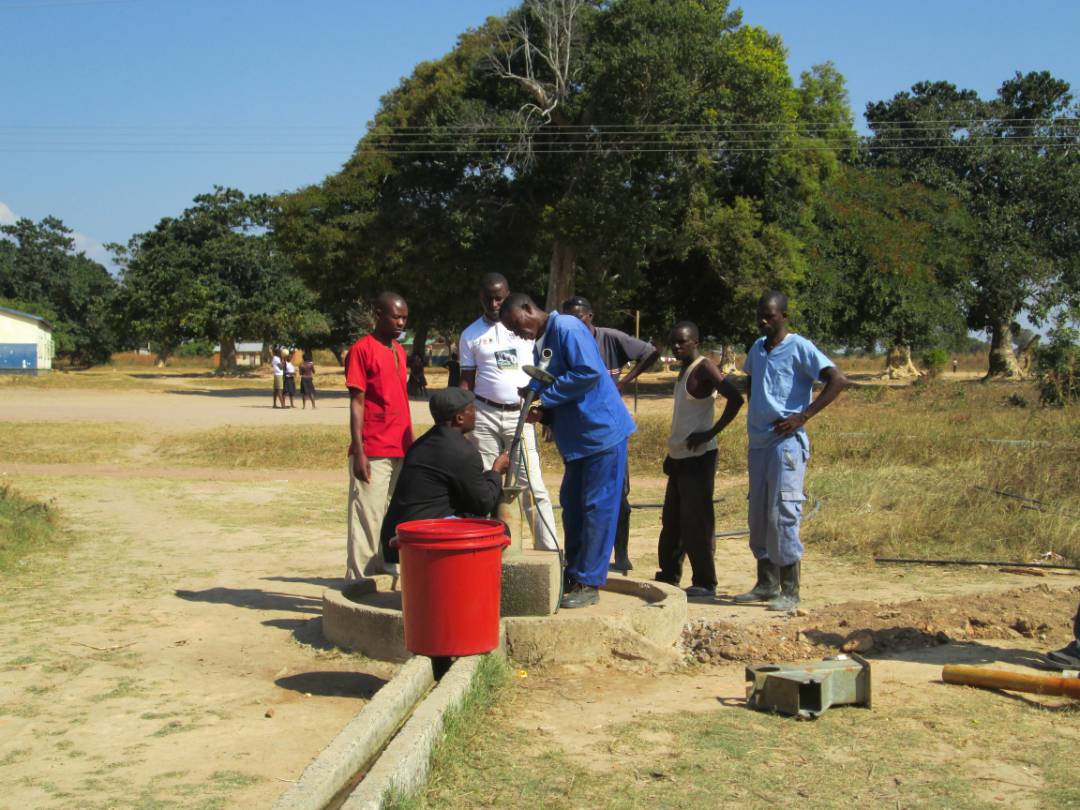 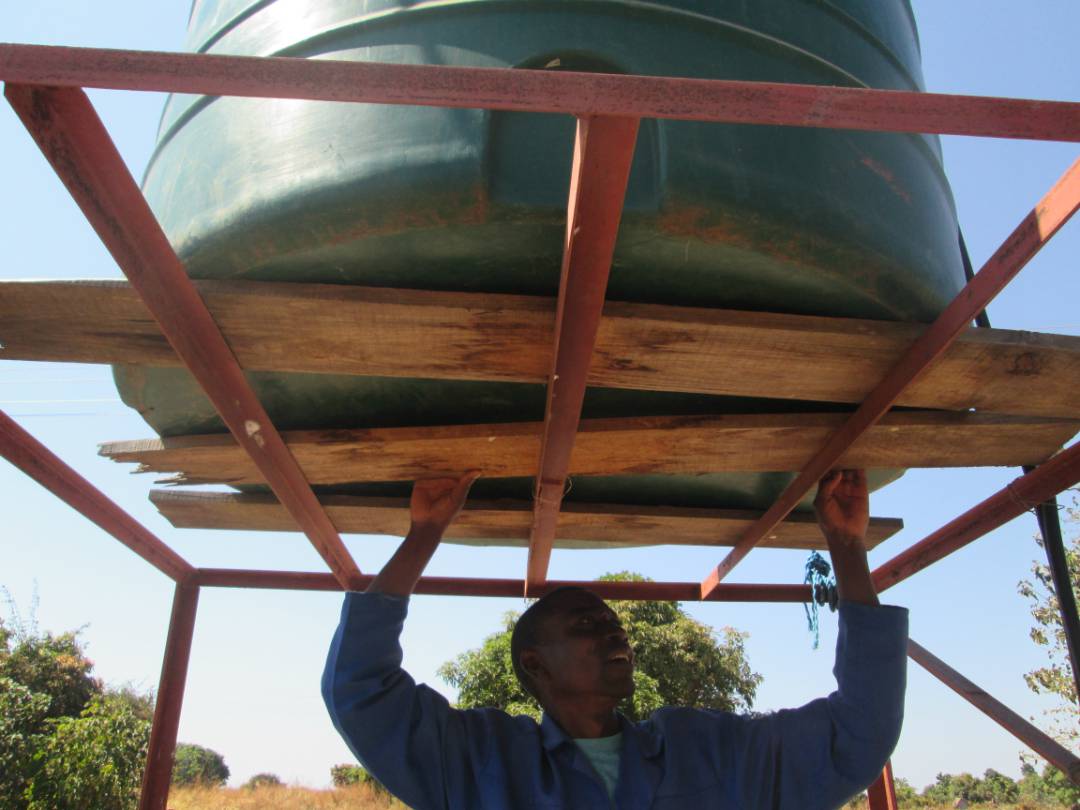 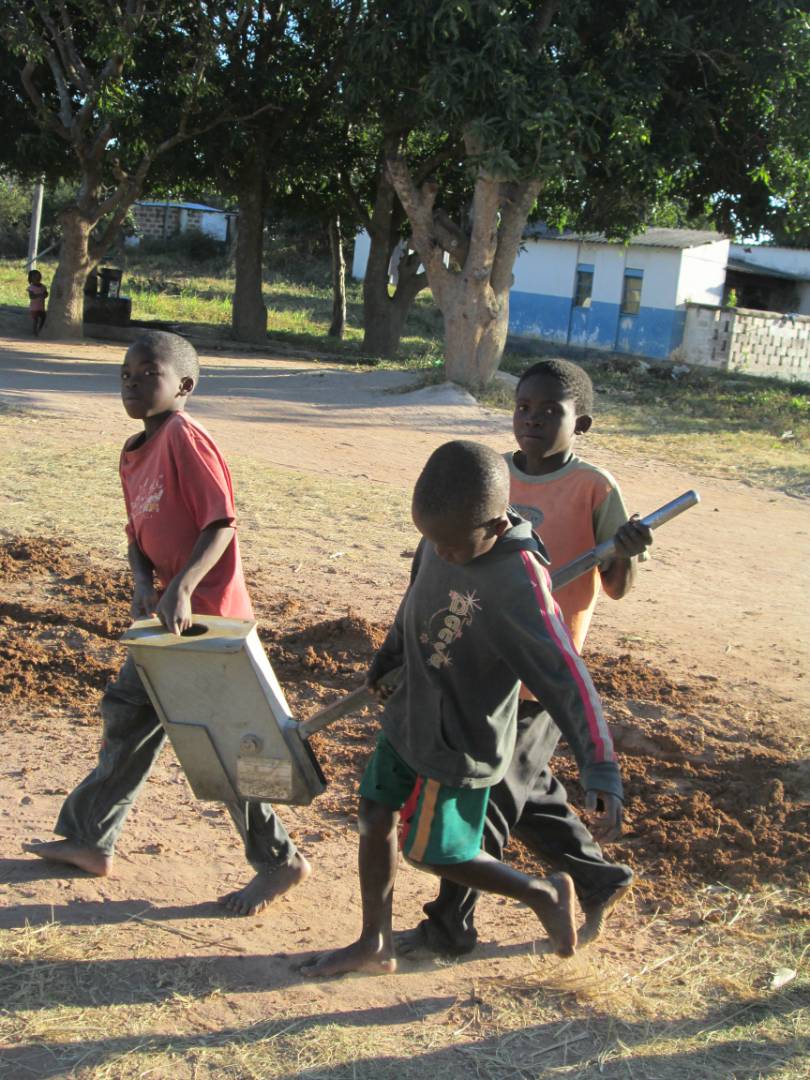 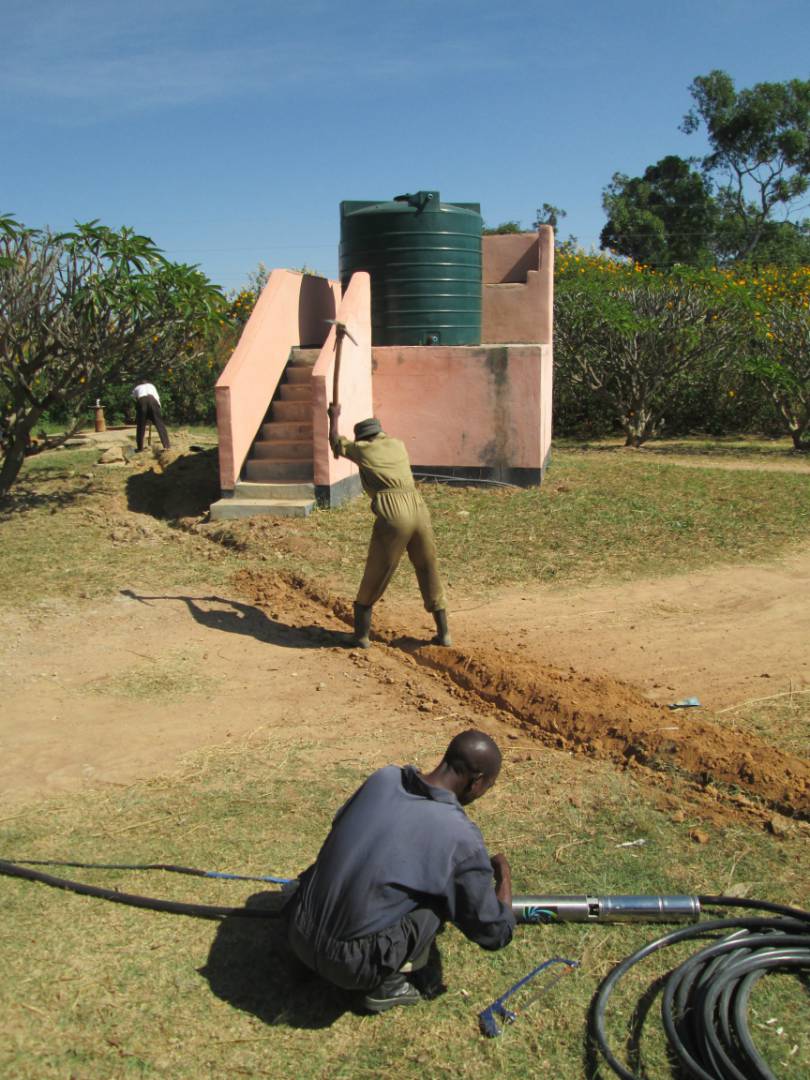