This project has been completed under the direction of Peace Corps Volunteer Alyssa Sajady. To read about the beginning of the project, CLICK HERE.

The project was to rehabilitate four water pumps located throughout the village.

A summary of Alyssa’s report is as follows: 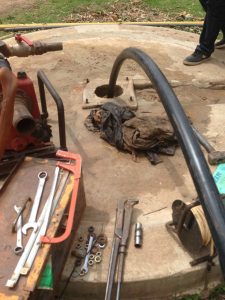 The scope of the Likarangilo Water Pump Rehabilitation Project was to repair four out of the total six water pumps throughout the community that were no longer functioning properly. This had long been a priority project for the community, but they were lacking the direction and financial support up until the involvement of Peace Corps and Water Charity.

The village government, the water committee of Likarangilo, and the Peace Corps Volunteer worked together with water engineers from Handei Tanzania to identify the various repairs that each of the four water pumps needed, and the total cost to repair the four water pumps amounted to 7,648,000 Tanzanian Shillings (TZS).

Over the next 8 months of mobilization and planning, the community successfully raised their contribution of two million TZS, while Water Charity generously provided the remaining funds. Once the project was fully funded, arrangements were made for Handei Tanzania to repair the water pumps over a span of two days. The water committee members, the counterparts of the volunteer, dedicated community members, and the PCV herself supervised and assisted with the repairs, which consisted of the following:

Pump # 1: A deep cleaning was done to remove dirt and increase the depth by two meters, from 27 to 29 meters. Ten tubes, through which water is pumped up from the water table, were replaced.

Pump #2: The well was cleaned, completely removing all sludge blocking the water path. The depth was increased by five meters (from 27 to 32 meters), and three tubes were replaced. 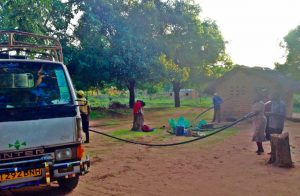 Pump #3: The existing water pump handle was repaired by soldering the pieces of metal that were damaged and replaced rubber band parts within the pump. This well was also cleaned to completely remove sludge blocking the path of water flow.

Pump #4: The well was cleaned to remove sludge and the depth increased by two meters (from 27 to 29 meters), and six tubes were replaced.

After two days of repairs, all water pumps that were worked on successfully yielded clean and potable water. A meeting was held shortly after with the water committee and village government to discuss how the project went, sustainability of the project by collecting contributions of 2,000 TZS from each household monthly, as well as a lesson plans for conserving water and how to properly care for the water pumps. These short lessons will be presented to each sub-village over the upcoming months.

We are grateful to Alyssa for completing this important project. 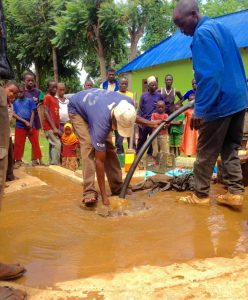 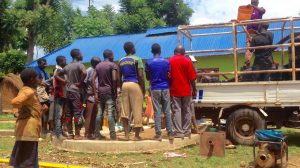