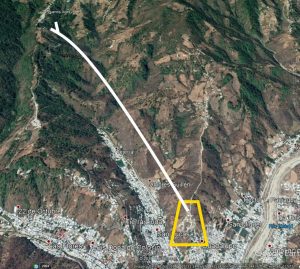 Community Description
Union Buenavista neighborhood is situated on the steep ridge that rises sharply out of the river valley on the edge of the city of Motozintla. The people earn a living from work in the town. Some are fruit vendors in the market, others peddle goods on foot or in small stands on street corners, one man sells homemade ice cream from a small cart he pulls through the streets. Others rely on raising corn and beans to feed their families in an increasingly unstable climate that has caused crop failure in recent years. Some men are masons and day laborers. One family raises poultry to sell the eggs. While these activities mean a long day’s work, they only afford them an impoverished standard of living.

Problem Addressed
Twenty-four families living in Barrio Union Buenavista have been struggling to get by with a woefully inadequate water system even though they have two perennial springs that could provide for their needs all year long. Many years ago, they pooled their meager earnings and managed to build a system that had worked well enough until a forest fire burned the hose. 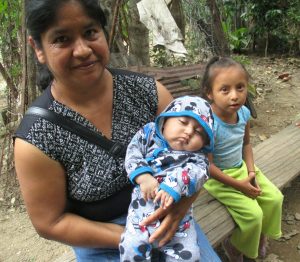 It is 6 kilometers from the source to their neighborhood. After much effort, the water committee leaders secured a donation from the city of 13 rolls of 2 inch diameter hose but that was only a small part of what they needed. The people are very poor in this neighborhood so it had been a feat when they managed to save enough money to build the original water system. Since then the price of materials has gone up so much that replacing the rest of the damaged hose has been beyond their reach.

But not having access to water was an emergency that they had to find a way to address. They patched what sections of hose they could salvage with plastic bags and strips of rubber inner tube. The majority of the long water line had to be replaced so they purchased a smaller diameter hose to make up the rest of the distance. At present, the water begins to flow through a 2-inch hose for 1.3 kilometers where it is reduced into a section of 1.5-inch hose. Then the flow is reduced again into a longer section of 1-inch hose for the remaining kilometers until it reaches the community. The resulting amount of water reaching each household is seriously inadequate, causing them to have to make do for long periods with only a small amount of water for daily use.

Typically, people fashion connectors out of a smaller hose that they insert into each end of the hose they need to join. They wrap these junctures with an inner tube. This inadequate system constantly breaks down when the pressure forces joints to explode and disconnect at the junctions. Sometimes debris clogs the junctions and the pressure builds up until joints burst higher up the mountain. The men have to continually spend whole days searching for the leaks along the 6-kilometer stretch through the rugged mountains. It is a tremendous loss of time that could be spent on more productive activities. 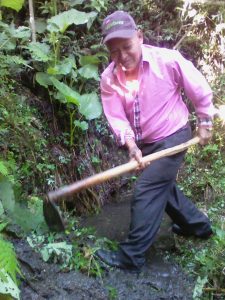 Project Description
This project is to build a water system to serve the needs of the community.

The members of the Barrio Union Buenavista water association own the rights to two perineal springs. These streams are joined with a small cement basin/tank to which they have connected their hose. They have asked for 40 rolls of 2-inch polyduct hose to replace 4 kilometers of their water line. This will be used to replace the old hose and upgrade the entire system to the heavy-duty hose of consistent diameter and good durability. The hose has a 10-year guarantee from the manufacturer while the life of the material is decades.

Each joint of the hose will be connected with factory-made connectors and fastened at each end with metal clamps that will be screwed tight. This is the system we’ve used with success to prevent the joints from separating. The hose will be buried several inches deep to protect it from sun damage, vandals, and from foraging animals. The men in the community will carry out the work in teams until it is completed. The materials will be transported from Motozintla to a point along the ridge to make it easier for the men to carry the heavy rolls of hose to where they will be installed.

This upgrade will significantly reduce the difficult, tedious, and time-consuming task of having to maintain the system. It will also stabilize the amount of water available to households.

Project Impact
One-hundred thirty-three people will benefit from the project. It will make it possible for people to raise animals like poultry and pigs and to plant small food gardens.

Project Administration
The project will be administered by Tamara Brennan, Ph.D. of The Sexto Sol Center for Community Action, an award-winning non-profit that has had a permanent presence in the region since 1997.

This project is the 22nd water system project in the ongoing Sierra Madre Water Program, a comprehensive effort to improve water access in the underserved and impoverished Sierra Madre de Chiapas region of Mexico, spanning the border with Guatemala. The program has already brought water to more than 9,500 people.

Monitoring and Maintenance
After the project is completed the elected leader of the water committee will be charged with making sure that the water is equally distributed to all households. Among his responsibilities is to ensure that individual users are conserving water appropriately. He will direct the heads of each household to collaborate to maintain the system. It is expected that the amount of work required to keep the system working will be greatly reduced by this upgrade, something everyone is hoping for.

$0 – This project has been funded through the generosity of Michael and Carla Boyle, of Foster, WV.

Additional donations using this Donate button will be used for future projects in Mexico.