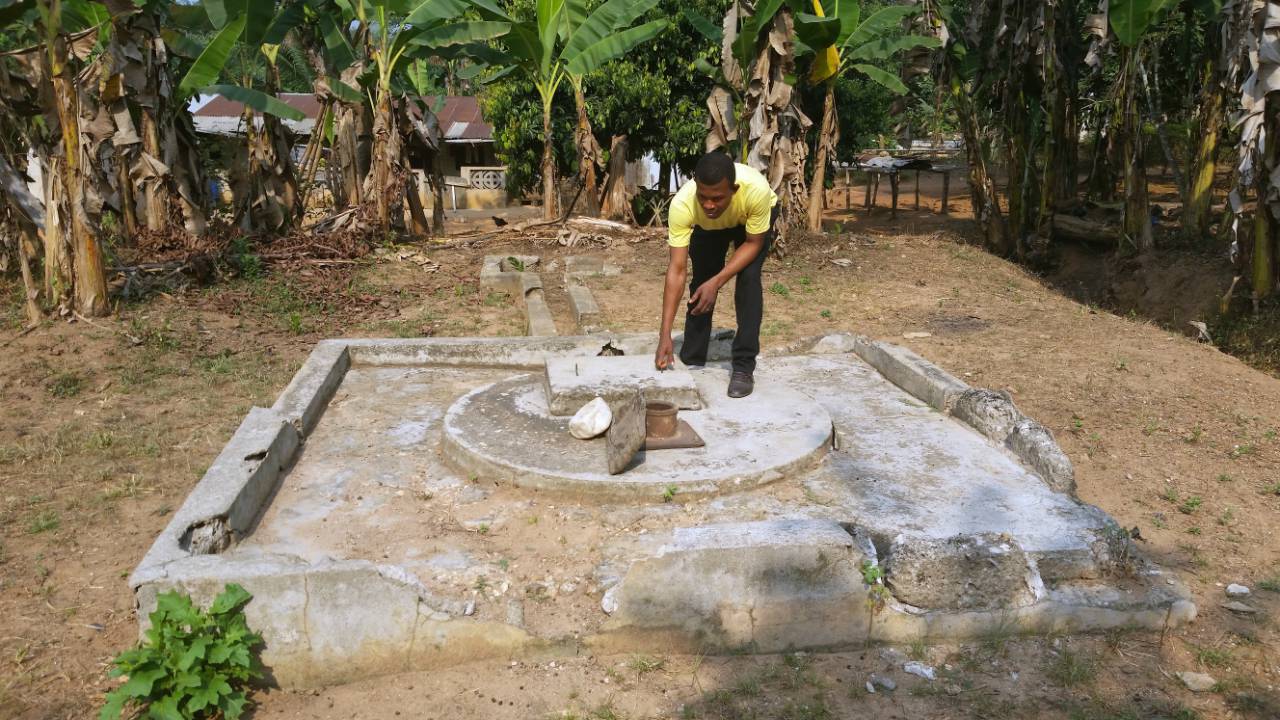 Community Description
Xxxxxx is a rural community located just off the main Accra-Kumasi road only about a 30 minutes’ drive from the market town of Nkawkaw in the Eastern Region of Ghana. It is surrounded by beautiful mountains and bounded by a river on its north end which shares its name.

Xxxxxx is home to approximately 900 residents with an ever-growing population. The community is comprised of both Muslims and Christians and is divided by the main highway. Xxxxxx also tends to share and borrow resources from its surrounding communities such as markets, schools, and water sources.

The community is full of hard-working, dedicated people who mostly rely on farming to sustain their livelihoods. They grow such crops as cocoa, maize, cucumbers, bananas, and plantains. 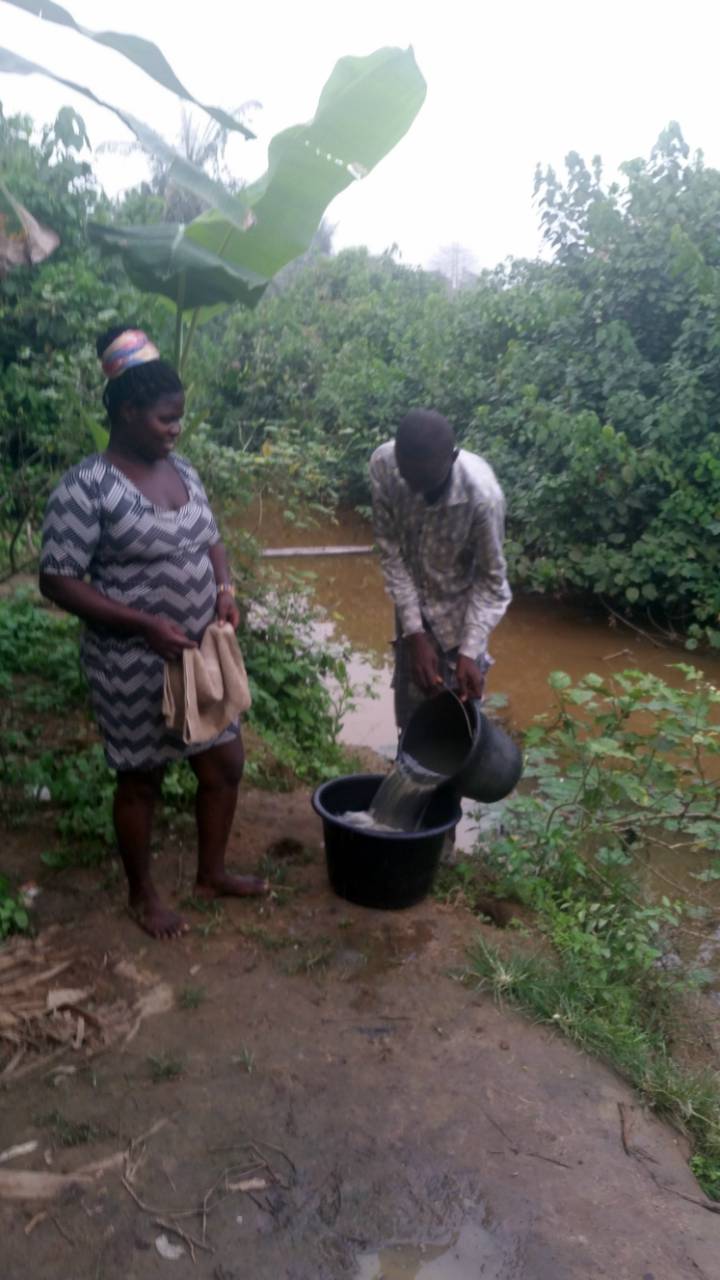 It is a very traditional community where you are expected to greet and revere your elders, treat guests with the utmost respect, and attend religious services and ceremonies whenever possible. Men are expected to go into the fields to work and provide for the family while women maintain the household. People live a simple and humble life with a positive outlook on the future.

Problem Addressed
The community currently has five hand-pumped boreholes within its city limits; however only two are functioning. Two of the boreholes are completely condemned due to poor workmanship, and one recently broke down.

Furthermore, the task of collecting water is traditionally given to women and children in this community. Some children begin fetching water as early as 3 years old. At times when one or more boreholes are not working due to maintenance issues, women and children tend to travel farther for water as well as have to cross the main highway. This can prove to be very dangerous for the younger children.

During the dry season, water becomes even scarcer because some of the boreholes do not function at these times. This once again causes increased travel time and effort for those sent to fetch the water. These circumstances in turn decreases productivity of the community by taking time away from other things such as school or work.

There are also situations in which individuals decide to collect water from the nearby streams because of the water shortage. This, of course, can lead to a variety of health issues because these waters have not been treated for pollutants.

Project Description
This project is to re-build an existing borehole, install an electric pump, build a platform and install a water storage tank, and install piping to access points in the community. 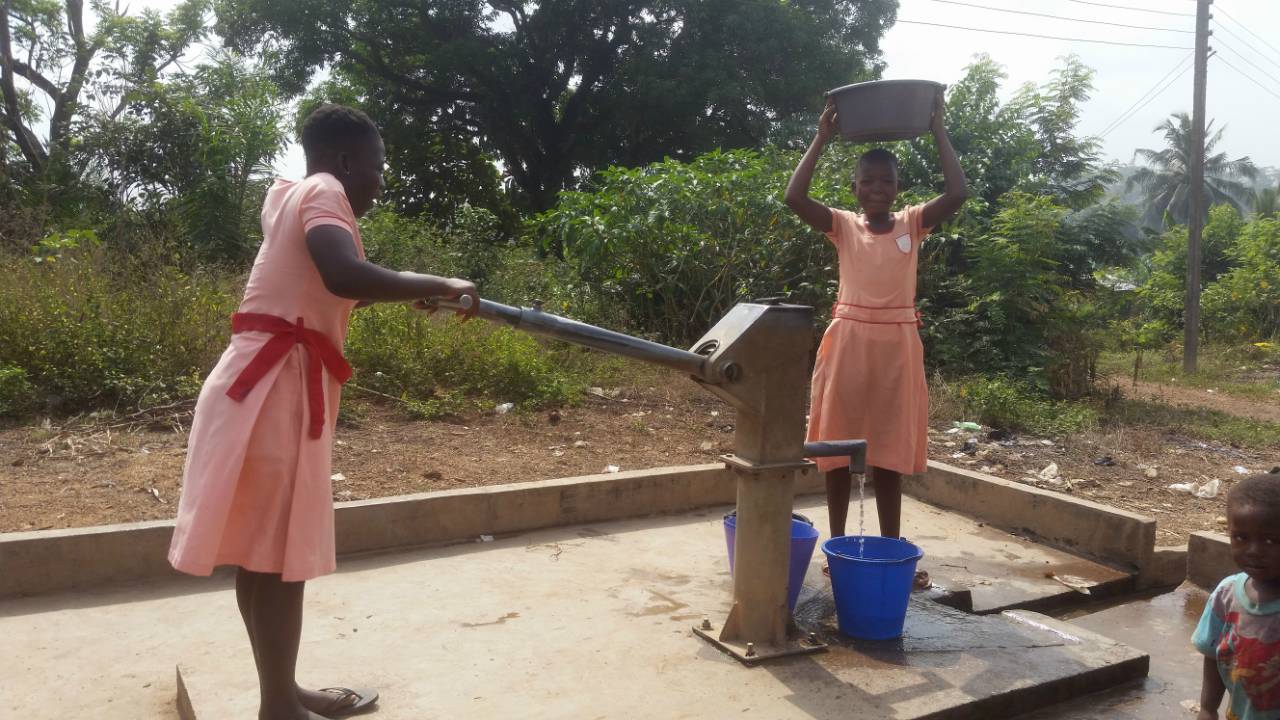 An existing borehole, with a yield sufficiently high will be rehabilitated into a mechanized borehole, powered by an electrical pump, that will bring water up from the water table and store it in a Rambo 1,000 Polytank capable of holding 10,000L of water. This tank will be able to satisfy the water demand for Xxxxxx and its immediate surrounding communities as well as alleviate pressure on the electrical pump by allowing time between fillings.

The Polytank will be placed on a concrete stand with four pillars for support as well as a maintenance ladder situated 12 feet above the ground. At the source of the borehole there will be one overhead spout for those who will carry water on their heads without support and one regular spout at the base.

The company will also excavate and lay approximately 250 meters of Duraplast piping for two additional fetching points away from the source with regular spouts.

An additional soakaway pit, aside from the one already located at the existing borehole, will be placed at the end of the extension to prevent standing water near the distal spouts.

Just prior to construction an electrical meter for the borehole will be applied for, and activities designed to teach the community about proper borehole maintenance and sanitation practices will be organized with the drilling company. 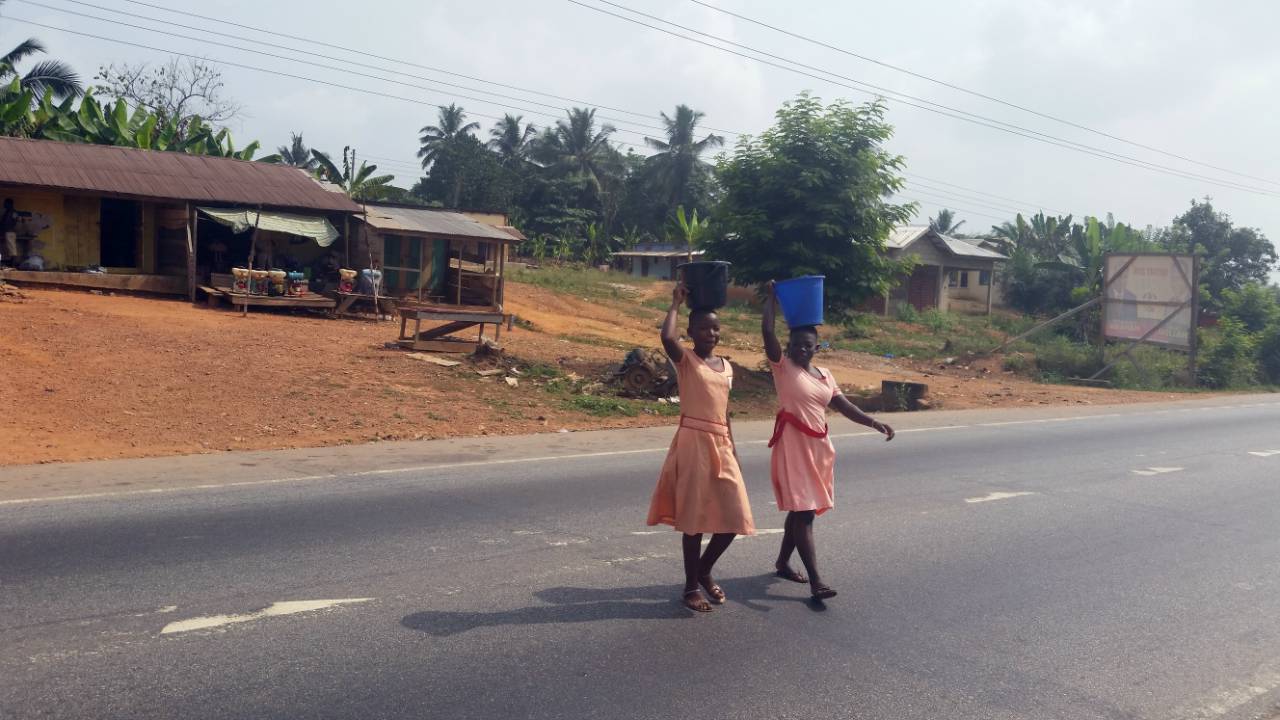 A pumping test will be performed at the time of construction to determine the type and size of the pump required to fill the Polytank. A typical pump for this size tank would be a 1.5 horsepower Interdab electrical pump.

In conjunction with Global Communities, a company that has done extensive work in the area of identifying water tables throughout Ghana, a reputable company called LINKS Drilling and Construction, Ltd. was identified. The company provided estimates for the cost of mechanizing an existing borehole. The estimate included having an environmental assessment and hydrological survey performed before any construction will be initiated.

Construction will last for approximately 6 weeks, requiring two weeks for the excavation and tower construction, 3 weeks for foundation drying, and one week for Polytank installation and connection. Throughout the duration of the project, and even after completion, the Water and Sanitation (WATSAN) Committee will continue to conduct community education activities related to water & sanitation and borehole maintenance as well as manage the community’s water and sanitation needs.

The community will provide the land and base of the borehole, conduct trainings and education sessions to the whole community, and engage in communal labor to keep the work site as well as the community clean and well maintained.

Project Impact
961 people will benefit from the project

Monitoring and Maintenance
The WATSAN Committee will oversee project completion and borehole maintenance after installation.

The Committee will collect funds from the community for the purpose of maintaining and repairing current boreholes as well as the utility costs and upkeep of the new mechanized borehole. The committee will meet monthly to discuss issues of sanitation in the community as well as to hold training sessions and activities on communal work days.

The committee will also be responsible for the continued collection of funds and to ensure that the funds are being spent responsibly on water and sanitation projects.

The Peace Corps Volunteer will work with the community to ensure that the WATSAN Committee is formed and prepared prior to mechanization of the borehole and that adequate funds have been generated to cover the costs of any repairs.

Comments
The borehole will increase the number of vantage points that can be used throughout the community. This will in turn increase water access in areas that are remote or where the population is growing.

The borehole will also decrease the time it takes to fetch water allowing more time for other productive things in the community. It will also reduce the economic strain on the community by lessening the tension placed on the already existing hand-pumped boreholes. This will decrease the likelihood of breakdowns and maintenance malfunctions which will allow funds to be saved more readily in the WATSAN account.

Let Girls Learn
The role of collecting water is primarily reserved for women and girls in the community. This role is expected to be fulfilled whenever there is a need and regardless of other duties that need to be performed.

There is already some gender bias which favors boy’s receiving education over girls when it comes to resources and school fees in the community. This bias can lead to a huge knowledge gap between men and women which can in turn put a greater economic strain on the community as a whole.

Furthermore, a lack of education makes women and girls more vulnerable to gender-based violence, sexually transmitted infections, unwanted pregnancies, and other diseases which can reduce their economic productivity even more over time.

This project will mitigate some of the obstacles young girls must face when trying to get an education by decreasing the time spent away from class sessions due to collecting water.  It falls under our  Let Girls Learn Initiative – Worldwide

This project has been supported by an anonymous donor. 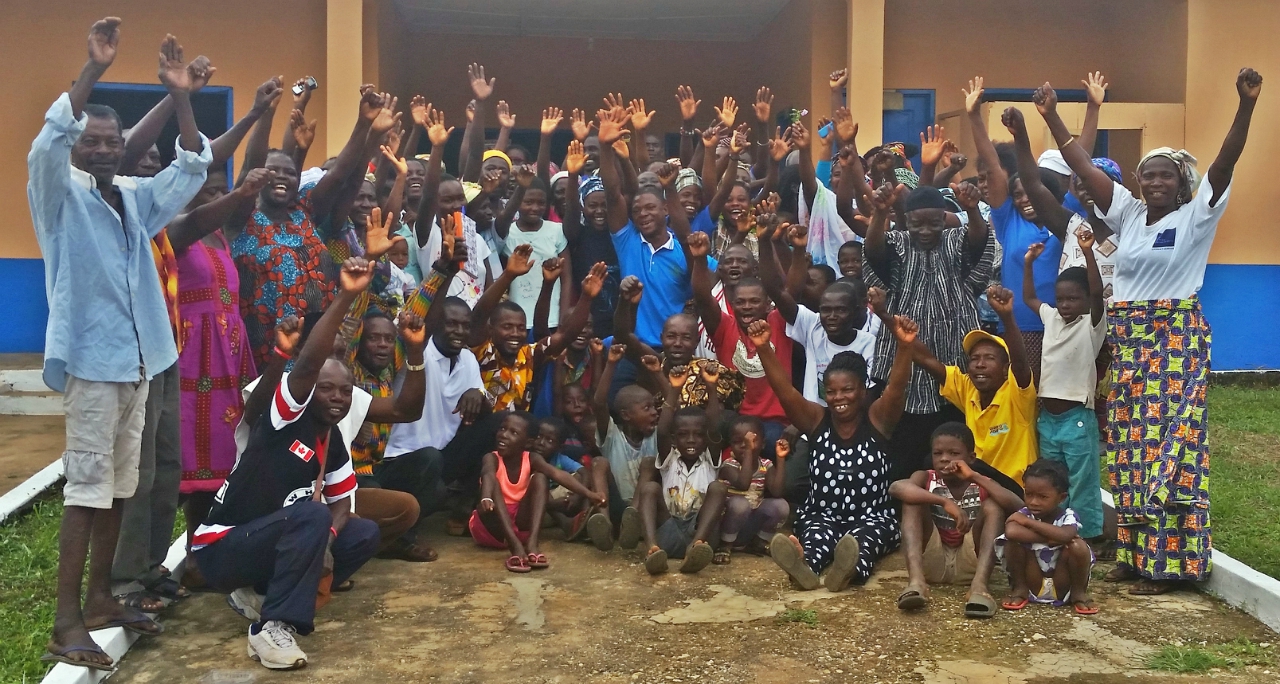 This project has been completed under the direction of Peace Corps Volunteer Zakiya Miller. To read about the start of the project, CLICK HERE.

The project has installed a mechanized borehole with 4 vantage points located at the base, and an extension point some 250 meters from the main station with an additional 2 vantage points. This makes a total of 6 new vantage points in the community of Asuoso in the Kwahu West District of Eastern Region, Ghana. 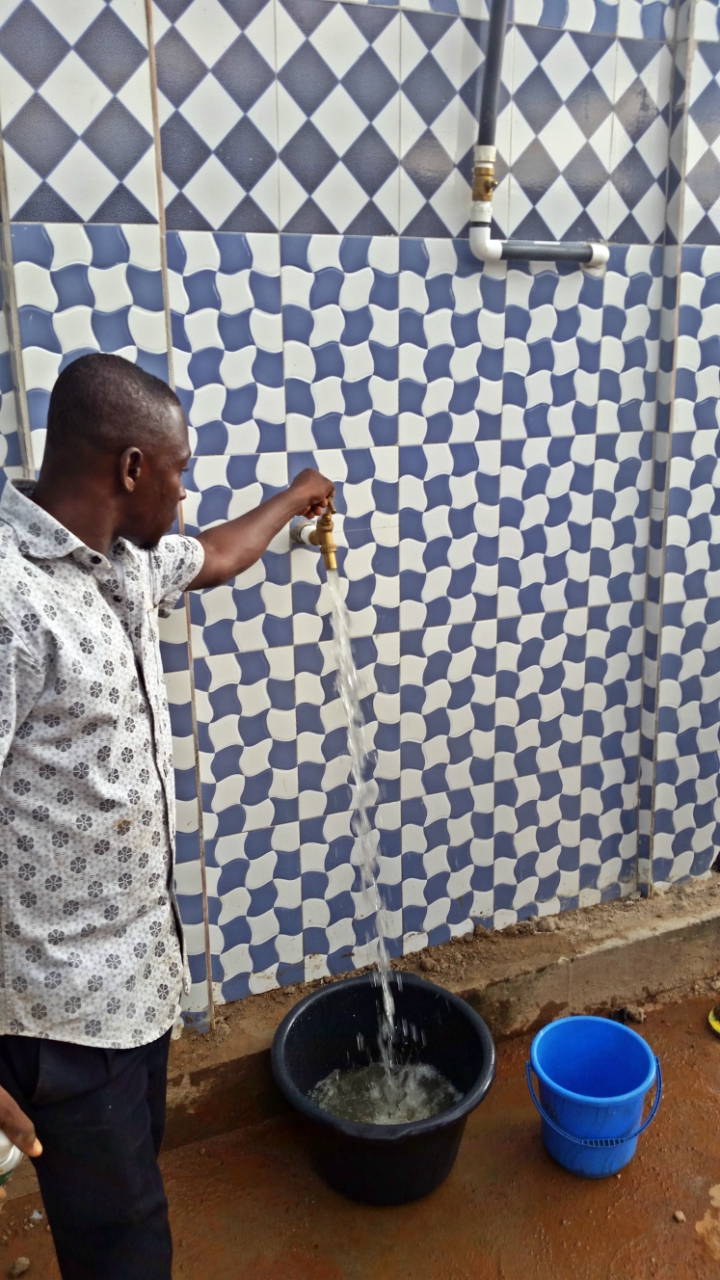 This borehole with an electrical pump will alleviate some of the burdens associated with collecting water including women and children from crossing the dangerous highway to fetch water.

Community members expressed the need for increased water access due to the long queues and far distance residents had to travel to get water. School girls were also missing school instruction time due to the far distance and long waiting times the girls would have to endure to collect water for the school. This sparked the decision to rehabilitate one of the existing manual boreholes and transform it into a mechanized borehole with multiple fetching points.

Just prior to the project initiation one of the 3 functioning boreholes broke down making water even more scarce in the community. This breakdown was particularly concerning because it forced residents to cross the main highway in order to collect water. This was a very dangerous situation for women and young children who are often sent to collect water for the household.

This project took the collective effort of community members, hired contractors, and the Peace Corps to accomplish. The community helped to clear the land, provide water and accommodations for the workers, and organized community resources to help complete the project. This helped build their capacity and take ownership of the development. This project served as a galvanizing agent to build resiliency and self-empowerment within the community so that they can continue to better their quality of life.

Construction began on April 24, 2017 and ended on July 21, 2017. This resulted in one mechanized borehole with an electrical pump to deliver water to 6 different vantage points. Four of the vantage points being located at the borehole base and two additional vantage points approximately 250 meters out in a community extension.

The new borehole is providing increased water access to approximately 900 residents in the town of Asuoso. 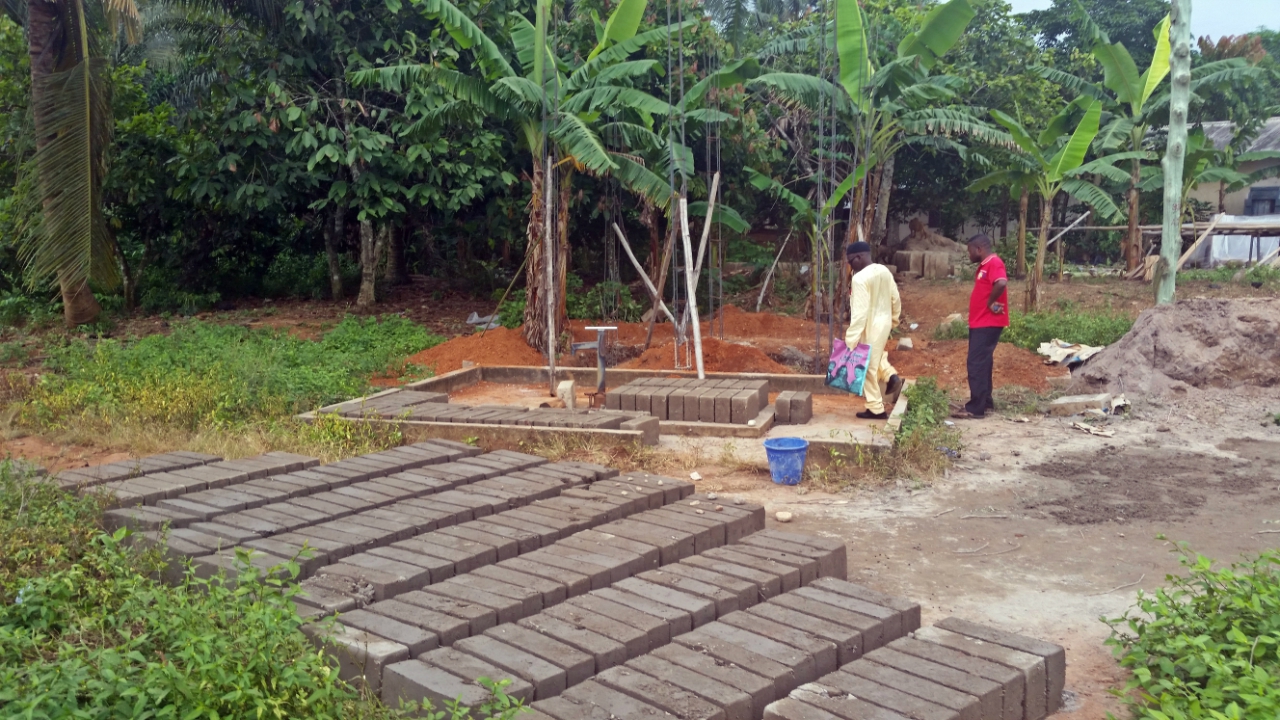 After clearing the land, the contractors began the scaffolding to build the Polytank stand and drilled the pipes into the existing borehole. Bricks were made to construct the Polytank stand and left to dry for about a week. The workers then returned to construct the stands and pillar for the Polytanks and extension. Plaster was added and left to dry for approximately one month due to heavy rainfall. The Polytanks were installed and the electrical pump was connected. The borehole was then tested for functionality. After all tests were performed, the borehole water was treated and then open for public use.

The primary goal was achieved by increasing water access to community members by installing a mechanized borehole over an existing borehole. The borehole has decreased fetching time by decreasing the distance residents have to travel to collect water as well as adding more vantage points for collection. This has in turn helped school aged girls gain more instruction time during the school day because it does not take them as long to fetch water for the school. Community members have been overjoyed by the addition of this new water source and they have promised to keep it well maintained.

We extend our thanks to Zakiya for completing this important project. 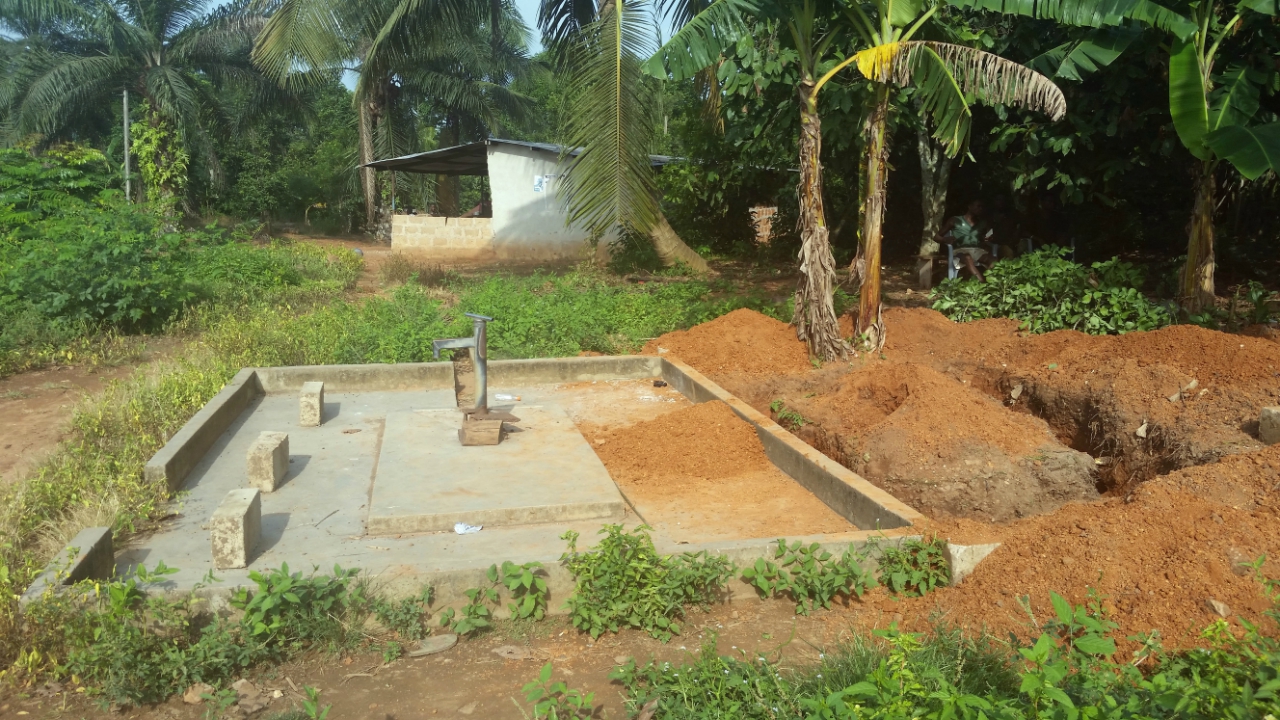 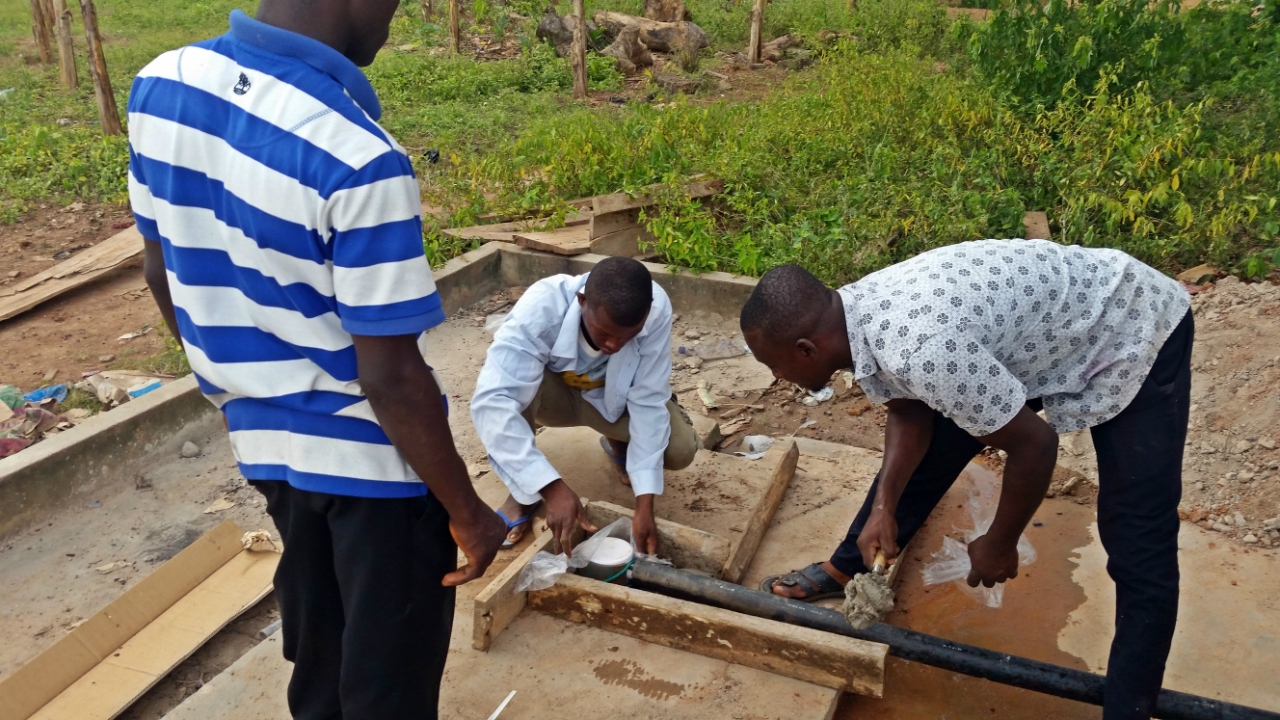 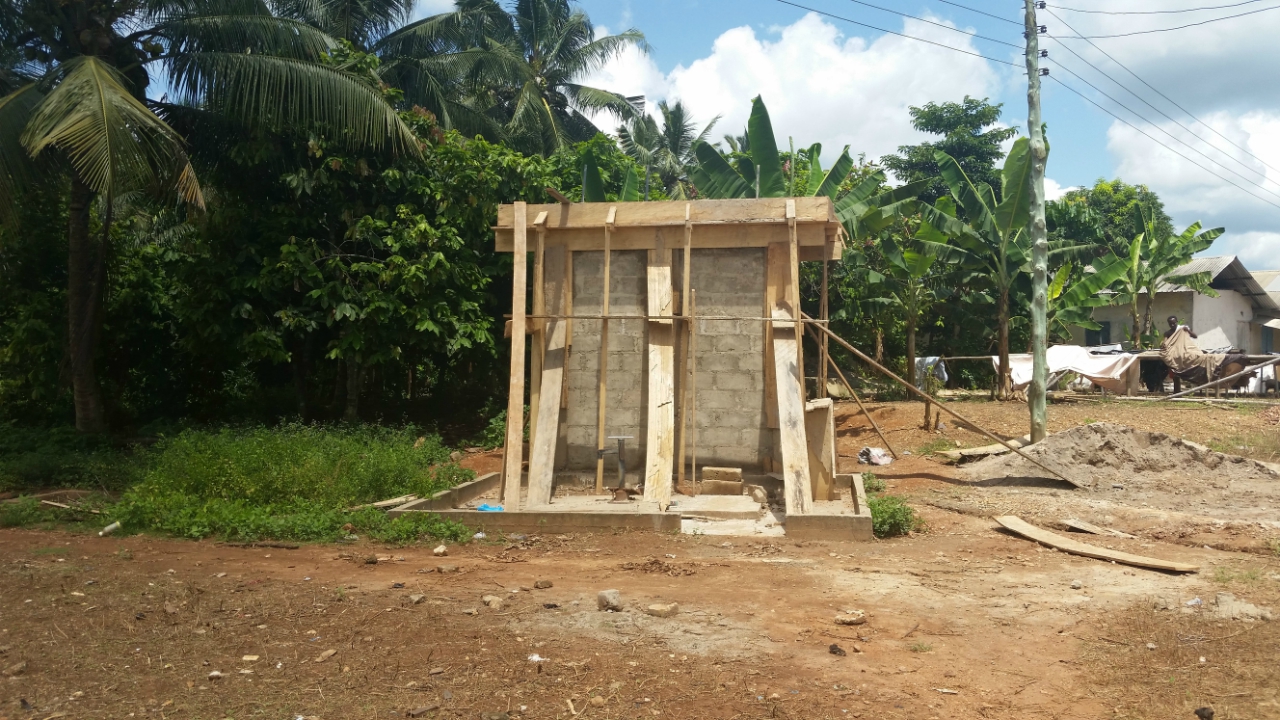 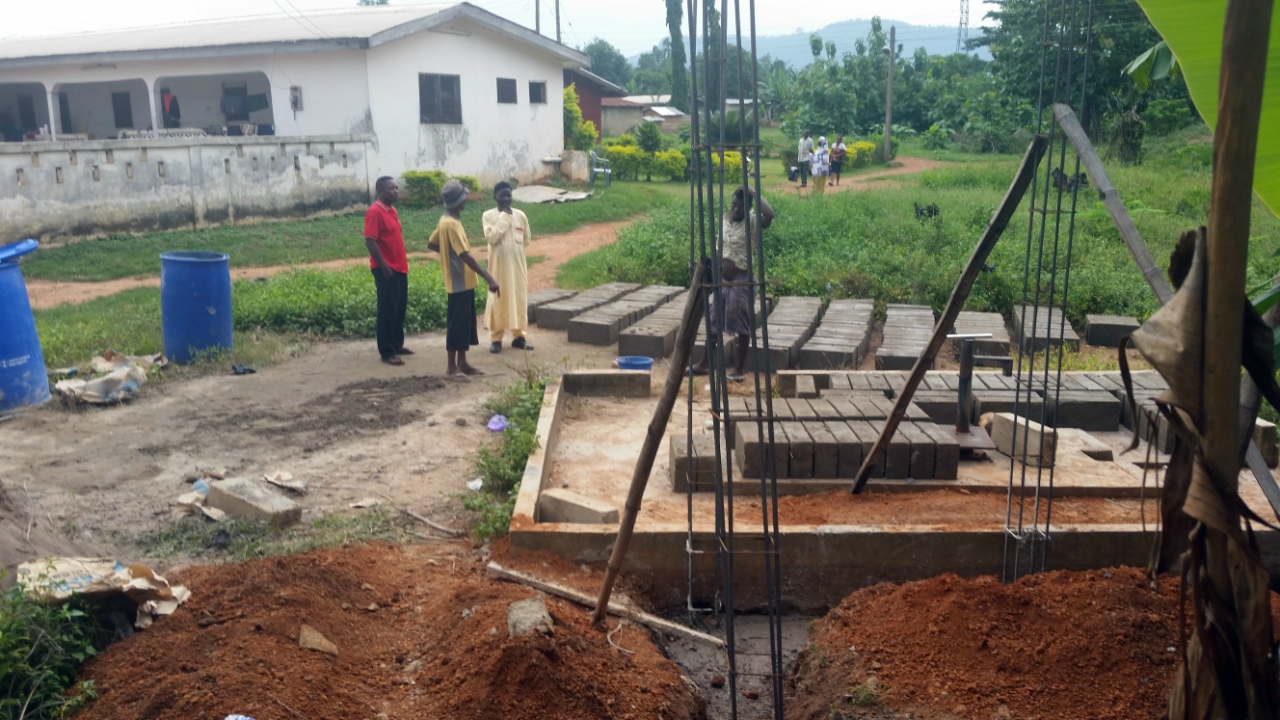