Description of Project Community
Kuno Ngunta is a remote village located about 8 kilometers off the main Trans-Gambia Highway, north through “the Wassu intersection,” along the northern Gambia-Senegal border. An isolated community of about 2,000 Nomadic Fulani tribesmen and women, Kuno Ngunta residents rely solely upon traditional subsistence farming methods: growing groundnut, coos (millet), and rearing cattle, a duty undertaken by a sect of the Fulani tribe, the ‘’Gainako.’’

DESCRIPTION OF PROBLEM
The community of roughly 2,000 people has only one functioning open well. This single open well is about 53 meters-deep, meaning it takes the strength of two or more people to draw water from it. In the dry season, the water table lowers, and it becomes extremely hard for the community to procure water from the well. Instead of human (primarily girls) labor, horses and donkeys are used to draw water from the well, which takes hours. Fights and quarrels between households are common and increasing in frequency due to the rush for sufficient water from the one precious well. Water scarcity hits every household year-round. According to one village health worker, frequent diarrhea and water-related illnesses are common in the community.

The open well is frequently contaminated. During our visit, the ‘’Alkalo’’ (village head) narrated a story of an animal falling in the well at night without the community knowing. In a day or two, when the animal began to decompose, the water became undrinkable. They had to tie ropes and lower someone down to get the animal out of the well. They had to dewater the well, which takes them days of hard labor. Severe sicknesses followed. The Alkalo said this has happened several times.

Women and girls suffer the most from the community’s water crisis. The nearest community, Mbayen, is 3 kilometers away and the path to it is a tough terrain full of rocks and shrubbery. Community-women described what they encountered on their way to fetch water from Mbayen: Strange men hiding in the bush, threatening the women with abusive words and insults. This has made the Kuno Ngunta village women fearful of walking to fetch water from Myaben. Now, due to the women’s fear of such abuse, men in the community use ox carts to fetch water from Myaben. Unfortunately, this burden of water fetching has led to poor harvests yearly. More time is spent on water collection than farming. This has impoverished the community. Family welfare and care is visibly dwindling as the effect of water scarcity are felt in every corner of the village.

DETAILED PROJECT DESCRIPTION
The project will be carried out in two stages:

Stage 1: Given that the water table is very low in the area, a highly reputable drilling outfit has advised us on the drilling of a 6-inch borehole at a depth of 80-meters. This deep drilling will provide ample flow of clean fresh water all year-round.

The borehole drilling outfit will monitor the job from beginning to end for quality assurance and effective execution of work with a warranty.

Stage 2: This stage involves the laying of pipes from the water tower to six selected water points (taps) in the village. This will be completed by a highly trained and reliable plumbing outfit to be supported by the villagers.

The pressure pipes and plumbing materials will be high-quality considering the harsh environmental conditions that mark the area, with temperatures reaching 42 degrees Celsius in the dry season, and harsh winds in the rainy season.

WATER CHARITY FUNDS
Will be used to pay for materials and skilled labor.

MONITORING AND MAINTENANCE
A 6-member water management committee has been created, consisting of serious and dedicated people chosen by the villagers in a meeting held at the village Bantaba (village square).

The selection of the committee members was gender-balanced. Mrs. Maimuna Jallow was made head of the water management committee while Mr. Buba Dem was made the assistant head. Mr. Jibbie Jallow was made the treasurer and Mrs. Maimuna Barry was made the leading auditor. Training will be conducted for them on community management model techniques. Further training workshops will be conducted for them after the completion of the project in order to sensitize them on the importance of taking good care of the taps and the entire water system to maintain durability.

The selected water committee members will be visiting taps regularly on every street to check that every tap is working properly. It was strongly agreed at the same meeting that every month, each household head will pay a token and a bank account will be opened by the village water committee, with three mandatory signatories, where the collected amount will be saved for future maintenance and repair.

The committee will be transparent and audited in their financial transactions, reporting monthly to the villagers at the Bantaba (village square) to be coordinated by the Alkalo (village head). Through this governing mechanism, the community will have a sense of ownership and responsibility and we can help ensure the overall sustainability of the project.

Water Charity Program Manager Ebrima Marong will visit the community regularly to check whether the system is working accordingly, to verify that the water management committee is working effectively, and to offer advice.

Girls are tasked with water collection or other household labor related to water. The ratio of school drop-outs among girls from the Kuno Ngunta community is also alarming.  And now, with women too scared to fetch water from Mbayen, girls often stay at home to watch over the children while the men go to fetch water from the neighboring communities and while their mothers work on the farm all day. So many of the community’s problems trace back to its lack of water.

This project will give these girls the chance to learn and remain at school without dropping out. The community elders have agreed and fully committed that whenever this project is realized, they will all send their girls to school. Moreover, it will help girls enjoy access to clean water to maintain hygiene—both at school and at home. 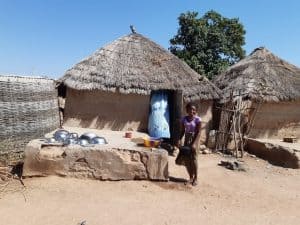 Jainaba should be in school. Instead, she is at home doing household chores. Here she is cooking lunch while her parents’ farm and fetch water.

Three children struggle to get water out of the well, while others wait for their turn. This is the daily norm in Kuno Ngunta.

Binta is among the lucky Kuno Ngunta girls who attend school at Mbayen Lower Basic School. She is in the third grade. However, her parents aren’t certain they can continue to keep her in school within the context of the current water crisis.

Water Charity Program Coordinator Ebrima Marong and Mr. Yahya Jobe, Department of Water Resources Regional Coordinator. We are meeting with the community to oversee the formation of a Water Management Committee. Some members were busy at the farms and could not attend. The lack of water has everyone spread too thin.

We drilled a new borehole, installed a submersible Grundfos pump, and built a tower mounted with a 10,000-liter triple-coated water storage tank. The pump is powered by high-quality mono-crystalline solar panels on a galvanized solar panel frame. Six water points were created, which will make water accessible to all villagers in this densely populated community.

Check out the short movie we made about the Project’s completion: