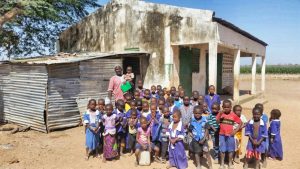 Community Description
Korop is an isolated community nestled near the River Gambia, up a rough dirt road from the main highway. It and the surrounding villages are 7 kilometers from the nearest school and therefore few of its children went to school, and those who did started late, when they were old enough to walk nearly two hours each way to school. Several years ago, the government built a grain storage building in the village. The next year, village leaders approached the government: could they use the building for a nursery school instead? When given permission, they pooled their funds and hired a teacher. the got used desks from a school that had been given new furniture. The next year, they hired another teacher. Since the building was one big room, they turned half the chairs to face one direction, and half the other. GambiaRising supplied plywood and blackboard paint to make chalkboards for the two “classrooms”. The government said it would not supply teachers for a nursery school unless it was part of a government lower basic cycle school, so the following year, the school used old corrugate to build a small classroom next to the old grain storehouse. It was not sturdy, and it was an oven in the hot sun. The government was now providing teachers (four of them). With split shifts, a total of five classes were held: Nursery 1, Nursery 2, and grades 1 through 3. Total enrollment were 154 students, 93 of them were girls. At this point, the community again called GambiaRising. Could we help them build classrooms? Meanwhile a returned Peace Corps volunteer was talking with the congregation of St. Paul’s Lutheran Church in Cole Camp, MO about her experience as a Peace Corps volunteer in The Gambia (she is a pastor and is also married to the pastor of St. Paul’s). The church decided to share a portion of its Christmas and Easter collections with GambiaRising, and we decided to use it to fund two classrooms. The community provided all the labor, GambiaRising provided funds for the materials: cement for hand-made bricks, timber for the doors, windows, and roof frame, corrugate sheets for the roof. The rainy season was coming, but the bricks got built and the roof put on before the heavens opened; the winds and rain also destroyed the temporary corrugate classroom. So, when classes started in September 2018, Korop had itself two school buildings, four classrooms. And six grades (Nursery 1 through 4th grade).

Problem Addressed
When GambiaRising visited the school in September 2018, we met with the Head Teacher, Regional School liaison, and community leaders. A list of next steps to provide the school the community deserves was created. It consisted of: • Toilets – The school will have close to 200 students in the new school year, it current has only a single traditional reed-screen latrine, right next to the school. It needs toilets for girls and boys, separated from the school, with hand washing stations. • Water – Students currently walk to the village well for water, while this is not far from the school, it requires them to leave the school grounds. We found an open well on the school grounds, originally built to serve a women’s garden that is next to the school. It is currently covered with thorned branches to keep kids from coming close and falling in, and it is not being used. It is 14 meters deep and had 4 meters of water in it at the end of the rainy season, all agree that the water is clean but the open well is a danger to the children. • Kitchen – There is a broken-down shed on the school grounds, near the well, which the community would like to re-purpose as a school kitchen. The Ministry of Basic and Secondary Education has confirmed to the school that they can be included in a World Bank-funded school hot lunch program if the school has an acceptable kitchen completed by November. • School garden – There is space next to the women’s garden to create a garden for the school if fencing can be purchased.

Project Description
• Toilets – The community will build latrine toilets for boys, girls, and teachers, the pits will be hand dug, the bricks handmade, not too close to the school, hand washing stations will be stationed next to each of the three structures. • Well – The current well’s covering of thorns will be removed, various residue in the well removed, then the well will be covered and fitted with a hand pump to serve both the school’s needs, the women’s garden’s, and a new school garden (see below). • Kitchen – The current wrecked shed will be removed and any useable materials salvaged. Bricks will be handmade and a new kitchen and storage room for supplies will be created, these will need a strong steel door and serving window. The cooking area will have a chimney to prevent smoke pollution for the cooks. • School garden – The community will provide stakes for the fence and will install them on the perimeter. Fencing wire will be purchased and transported to the site and the community will secure the external boundaries of the garden.

Project Impact
Korop and the surrounding communities number more than 1500. The school’s enrollment and teachers will be 200 this school year.

Let Girls Learn
60% of the students in the Korop Lower Basic Cycle School are girls. Lack of toilets is a disproportionately large problem for girls. The creation of a kitchen will bring a hot lunch program to the School, thereby further increasing enrollment and also providing a nutritious meal each day to all students. The school garden will produce fresh vegetables and fruits to supplement the hot lunch ingredients provided by the World Bank. Monitoring & Maintenance: The Regional Education Office fully supports this project and will monitor its progress and success. GambiaRising’s Upcountry Program Manager will also monitor the project’s progress and ongoing success. The community and school staff are fully behind the project and will provide nearly all the labor for its execution.