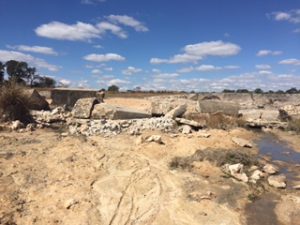 Community Description
This past rainy season, Southern Province experienced higher water levels than had been recorded in the last few decades as a result of the El Niño climate weather pattern. In Xxxxxxxx, heavy rains and a flash flood caused a collapse of the dam’s spillway. Over 75 % of the collected water was lost, with the remainder insufficient for the needs of the community during the dry season.

The village is named after the dam because of the village’s dependence on the dam. There are an extremely productive irrigation system and cooperative. Concrete furrows stretch out over into an irrigation unit covering 400m^2 which is fenced in and maintained for agricultural use.

There are community gardens and fish that cannot continue without the dam.

Problem Addressed
The pressure of the high rain levels created a sinkhole underneath the spillway that caused the entire wall to collapse. The spillway was responsible for holding in the water within the dam. With the destruction of the structure, all of the water rushed out in a span of a few days, leaving a low water level. 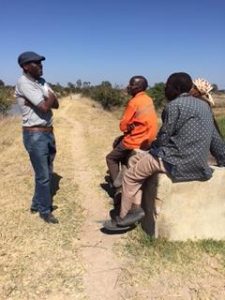 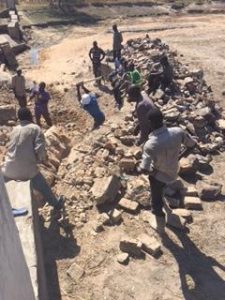 Project Description
This project is to renew the dam to full functionality by reconstructing the spillway.

The first part of the plan is to remove the large pieces of rubble left behind by the collapsed wall. An excavator will move aside the destruction in one day.

The Department of Agriculture will help choose an expert contractor to design and build a new spillway that will be able to handle a strong force of water pressure in the future, so this disaster does not occur again. The community is already busy hauling stones from all over the area to the site for the construction of the wall.

Once the excavation is complete and the materials are present, the project itself can be finished in just a few weeks. Project funds will pay for the excavation machine to be brought to Xxxxxxxx, as well as for the cement, reinforced wire, wheelbarrows and equipment for crushing the stone, and payment to the contractor for his design and supervision.

Members of the community will haul and manually crush the stones, and build the wall.

Project Impact
200 people will benefit from the project.

Monitoring and Maintenance
The use of a highly experienced contractor to design and build the wall will ensure sustainability. Careful attention to the construction materials and techniques will ensure that the new spillway remains stable and safe

This project has been completed under the direction of Peace Corps Volunteer Elizabeth (Betsy) Joslyn. To read about the start of the project, CLICK HERE.

The project was designed to renew the dam to full functionality by reconstructing the spillway. 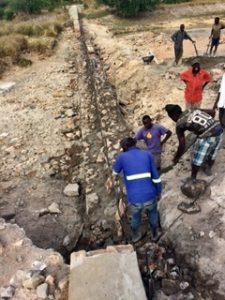 Scope of Project:
The scope of this project was to repair the spillway of the Nabuyani Dam located in Nazilongo, Kalomo District of the Southern Province, Zambia. The Nabuyani Dam was home to ~200 direct locals and the source of drinking water to over ~600 owners of livestock (cows, sheep and goats). The rain levels reached in 2017 were the highest levels recorded in over 40 years; the dam had been built poorly and under such pressure crumbled to nothing over night during a flash flood. The purpose of writing this grant was to remove the old rubble of the dam and obtain the funds to create a new spillway that would last for decades to come. 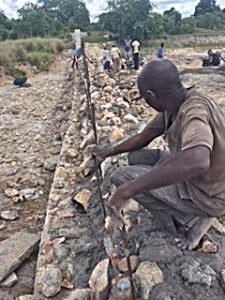 Work Done:
The village leaders and I worked with the Department of Agriculture to assess the work to be done and move forward. The area was not suited for large machinery, so the first step was the arduous removal of all the rubble by hand. Once the area was cleared and leveled we dug down deep to ensure strong foundations. Instead of making bricks, we hauled large stones and mixed them in with the cement to create a wall much sturdier than its predecessor. In the middle of the cement/stone cake, we planted a strong rebar fence to act as the core. After finishing the spillway, we encased the structure in another rebar fence and laid down cement over that making a much stronger and longer lasting structure than the one prior. Our goal was to make sure a disaster like this would not occur again. We were able to finish these goals before the rain started; however, we have additional plans to add a staircase of the backside of the dam after the rains have diminished so to decrease the pressure of water that spills over thus decreasing the chances of a sink hole forming in the future.

End Result:
The dam is currently holding strong with the highest water level in the dam that they have seen in years. Lots of work was put into the design and implementation of this spillway and now the end result is an immense amount of pride as well as a sense of security for their way of life in Nazilongo.

We extend our thanks to Betsy for completing this important project.