This project has been completed under the direction of Peace Corps Volunteer Evalynn Romano. It was made possible through the partnership of Water Charity and the National Peace Corps Association.

This was a project under the LET GIRLS LEARN Program, a collaboration of First Lady Michelle Obama and the Peace Corps to expand access to education for adolescent girls around the world! 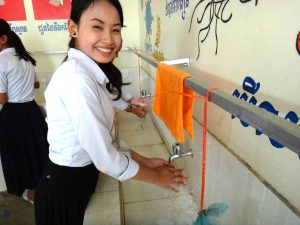 The Khnach Romeas Secondary School teaches 659 students in grades 7-9 and is the only secondary school in a rural commune of over 12,000 people. In regards to the latrine situation of the school, only two latrines were available for 659 students and one latrine for 35 teachers. The aim of the secondary school water project was to support the education of female students by constructing latrines specifically for the female students of the school population. Latrine construction has promising gains to deliver in terms of increased access to education for girls.
In addition, the water project aimed to implement a strategy for water supply, sanitation and hygiene by means of a well, a 3,000-liter water storage container and steel stand, hand washing station and the repair of two old latrines. Hand washing facilities as a complimentary measure to latrine construction mitigates the risk of contamination. The goal being to help the teachers and students, particularly female students, of the Khnach Romeas Secondary School gain access to water and sanitation. By providing a healthy school environment for the students through safe, clean latrines and water for hand washing, students will be able to spend more time learning at school and less time taking care of an illness at home. 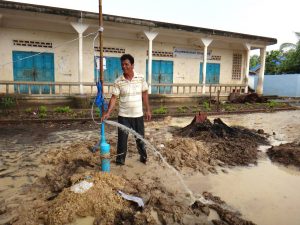 An anonymous survey concerning the views studentshold of the school latrines was distributed before and after the completion of the project to the entire school population. Data was obtained, compared and analyzed only from the surveys completed by female students. To follow a sustainable approach that combines the promotion of behavior change and the provision of facilities, the secondary school teachers planned and organized school-wide hand washing education sessions in the duration of two days. The teachers have a background in participating in a hand washing education workshop provided by teachers from a local primary school and were already equipped with the knowledge of health educating students. 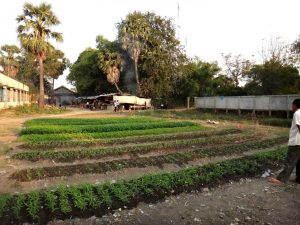 PROGRESSION OF PROJECT THROUGH EACH STAGE: 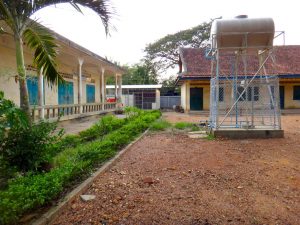 The results of surveys from 351 female students showed:

The results of surveys from 312 female students showed:

In comparison to the results from the survey distributed in October, these findings reveal a significant change in feelings towards the new latrine situation due to the water project. 88% of the female student population has used the latrines at school more than they did before the construction and repair of latrines. In addition, 98% feel more comfortable using the latrines now than they did before and 99% feel more comfortable after the separation of latrines based on gender. There is an increase by 5% of female students who have not left school to use a latrine outside of school grounds. Lastly, feelings of latrine importance slightly decreased.

For the first time, the Khnach Romeas Secondary School owns an uncontaminated and dependable water source with a motor pump system that allows water to be pumped into the hand washing station and latrines, creating a school environment that is hygienic and sanitary for the students. The school now possesses a total of nine functional latrines (two of which are from outside donors] in comparison to the three latrines before the initiation of the water project.

The water project has allowed for many positive changes at the school including the gender separation of latrines. This separation allows female students to comfortably use latrines on school grounds, promoting their education by avoiding travels to different locations for latrines and being absent from class as a result. In addition, a hand washing facility supports the education of all students by helping to prevent the spread of germs and mitigating poor school attendance from illnesses.

The Peace Corps Volunteer’s Khmer counterpart whom she worked closely with in the full duration of the project, Mr. Sovattanak Koeurg, is a well-respected teacher at the Khnach Romeas Secondary School. This will ensure further sustainability of the project long after the end of her Peace Corps service as he is familiar with the physical structures and educational aspects of the project and can personally manage each area.

I am happy, excited and satisfied with this project. Even schools in the city do not have beautiful hand washing stations like the one we have. — Mr. Sereyvuth Tiep, Khnach Romeas Secondary School Director

Whenever I walk into the hand washing station I think about how it is so modern for a school in a rural community surrounded by rice fields. — Mr. Sovattanak Koeurng, Project Counterpart and Khnach Romeas Secondary School Teacher

We are grateful to Evalynn for completing this excellent project.