This project has been completed under the direction of Peace Corps Volunteers Lussia Kamberian and Ryan Weber. To read about the beginning of the project, CLICK HERE.

The project was to repair the water pump for the shallow well in Kapchemogen, and to train locals in the technology.

I am happy to inform you that the Kapchemogen pump is fully repaired and functional!

Our work began one week after the funds were received. Our team, which consisted of me, Ryan, David, Manuel, and Elizabeth made a total of three trips to Kapchemogen. Elizabeth was the field coordinator/translator, Manuel was the artisan who repaired the pump and taught the community about maintenance, and David was our driver who also helped Manuel with the some repairs.

Our first visit was to introduce the project to the community and open the pump to see what the exact problem was. We asked for the water committee to meet us for our next visit for training on pump maintenance. After the pump was opened we were able to see that it was not an Afridev pump, but an India Mark II. Manuel was able to see that the casing, along with all the rubbers, and the pipe was damaged. The casing is what keeps the rocks and dirt out. However, since the casing was damaged, the pipe was full of rocks and sand. This also damaged the rubber washers within and between the pipes. Although some parts were damaged, we were happy to see that there was water inside the well. Plans were made to bail the water during the next visit. 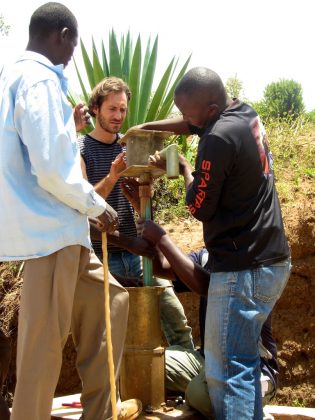 Ryan and I went on a search for all the parts needed, and had a difficult time finding them. After a week of searching, we travelled to Kitale, the closest major city and put in a special order. We also borrowed the equipment for bailing water from the Ministry of Water. After we received the parts from Kitale we travelled to Kapchemogen for our second visit. This time, we met with the water committee, and Manuel trained them on maintenance. Ryan was able to bail the water off most of the rocks and sand. This actually took a few hours.

We were able to pump water that day! However, it was very dirty. So, we decided to let the well rest, and return the following week. We also provided the water committee with the necessary tools to take the pump apart and provide the proper maintenance. When we returning for our third visit, we were able to see that the pump was working with clean water flowing out!

It was a successful project, and I am happy to have it completed as soon as we did! Thank you again for proving the funds to repair the pump in Kapchemogen.

We are grateful to Lussia and Ryan and the gang for completing the project, and again extend our thanks to the Elmo Foundation, along with friends and family of Lussia and Ryan, for providing the funding. 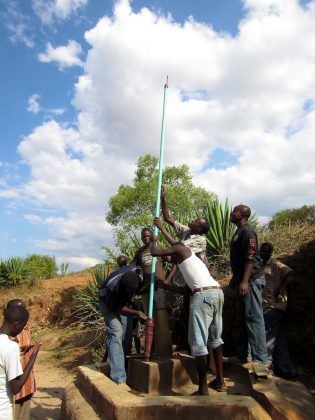 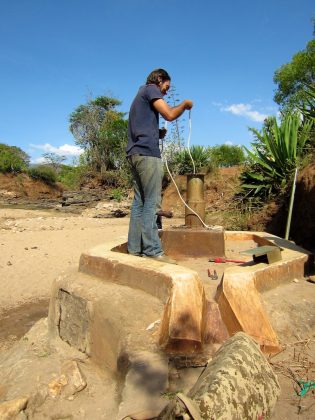