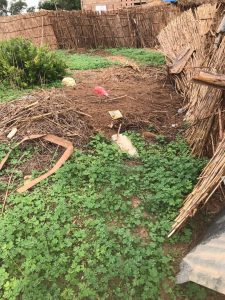 Community Description
Nxxxx Nxxxxxx is located in the southern area in the region of Kaolack, Senegal. The primary jobs in the community are farming peanuts, millet, and onions.

Problem Addressed
According to the baseline survey that was executed, almost 50% of the community reported defecating in open fields out of lack of other options. Initially, over 70 houses reported that they lack a proper latrine in their house but due to lack of time, advice from older volunteers and experienced Peace Corps staff the numbers for consideration were cut down to houses that were most in need of a latrine (those whose ONLY option are defecting in fields). Other results determined by the baseline survey showed immense diarrheal issues.

Nearly 70% of mothers reported that their child had diarrhea within the last 2 weeks, 65% said that they believe that their child would certainly have diarrhea again, and the majority reported that diarrhea would have strength. Diarrhea is a leading cause of childhood death and a lack of latrines which causes open defecation, along with inadequate knowledge of proper handwashing will only increase the number of health issues in Nxxxx in the future. 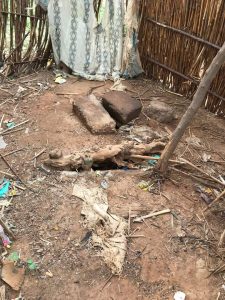 Project Description
The goal of this project is to construct 15 ventilated pit latrines in the community.

The process began in December, 2017, when the baseline survey began, in order to fully understand the health needs of the community. In May of 2018, meetings began to be held with the participants of the project. After figuring out prices of the materials that would be needed and to ensure motivation, a deadline was specified for when the 10% money contribution would be due.

Participants will begin attending classes on the following: proper handwashing, the dangers of open defecation, how to maintain and clean a ventilated latrine, soap making, and the reality of how germs transmit.

Next, after all monetary contributions are collected, 2m x 2m x 2m pit holes will be built by the recipients themselves as their in-kind contribution to the project, along with providing sand at the building site. The mason will then begin construction.

For each latrine, masons will assist by making six bags of cement and sand and water into bricks. Once the bricks are completed they will be inserted into the hole along with supporting rebar and rebar connecting wire. The latrine pit will then be covered by a layer of cement and gravel. Once this is done, remaining cement will be used to construct a toilet seat and two meters of PVC pipe and the PVC L connector will be used to connect this seat to the pit. Additionally, the remaining two meters of PVC pipe and the PVC pipe T connector will be attached above the pit of the latrine to provide ventilation.

After construction is complete, in-home visits will be made to the recipients to ensure the latrines are built correctly, and behavior changes in handwashing are being made, along with going over what was taught in their required classes.

A handwashing station will be a requirement for participation in the project. 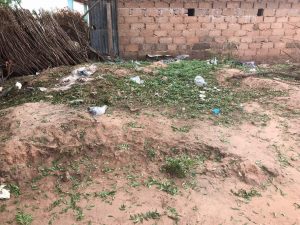 Participants will pay the mason’s fee, and for their handwashing station, along with the vegetable oil and shea butter needed for the handwashing class. Their in-kind contribution will take care of lunch for the masons , sand, digging their pit holes, water for cement, a solar lamp to give light to the latrine when it’s being used in the dark, and the gravel.

Water Charity funds will pay for the cost of materials, some materials of the handwashing class, brick making labor, and transport of materials and sand.

Project Impact
134 people will benefit from the project.

The leaders and counterparts have been the main coordinators of the meetings. They have taken it into their responsibility to hold the people accountable for how they take care of their latrines along with the main behavior changes that the village needs to adopt and put into effect to subsequently live healthier lives. This influential group of people have plans to take over this project after the departure of the PCV from the village by continuing with health talks and checking on the status of the latrines.

Furthermore, the mason that was chosen is a trusted member of the community. The people stated that he is best for this project because they understand that if there are any issues with their new latrines they can depend on him to come restore things.

Along with this, if taken care of properly, the latrines will last 5-10 years. This time expectancy gives the recipients suitable time to save money to restore their latrine without assistance from Peace Corps or any other outside providers.

Project Funding
The funds for this project are being provided by an anonymous donor.