Community Description
Kante is a town located in the Kara region of Togo. It is the administrative capital of the Keran Prefecture. Though the official language of Togo is French, the dominant language spoken among the local inhabitants is Lama.   Kante has a large population size of about 20,000, sparsely spread among its several neighborhoods, which can be considered independent villages. However, more than 85% of these inhabitants live in poverty or extreme poverty. A significant number of families live in small huts made entirely of mud, known as thatch roof houses, with an average of about 2-3 people per room, while the vast majority of people live in one, sometimes two bedroom houses made of mud, coated with sand and cement.

The dominant activity in Kante is subsistence farming. The main crops include, but are not limited to: corn, millet, yam, okra, and peppers. However, there is also livestock rearing, that includes cows, goats, sheep, guinea fowls, and pigs that are raised to generate income.

Problem Addressed
Life depends on water. A relatively healthy and prosperous life depends on a safe, potable, reliable and accessible water source. However, in Kante and surrounding villages, access to such a water source is extremely difficult during the rainy season, let alone the dry season. 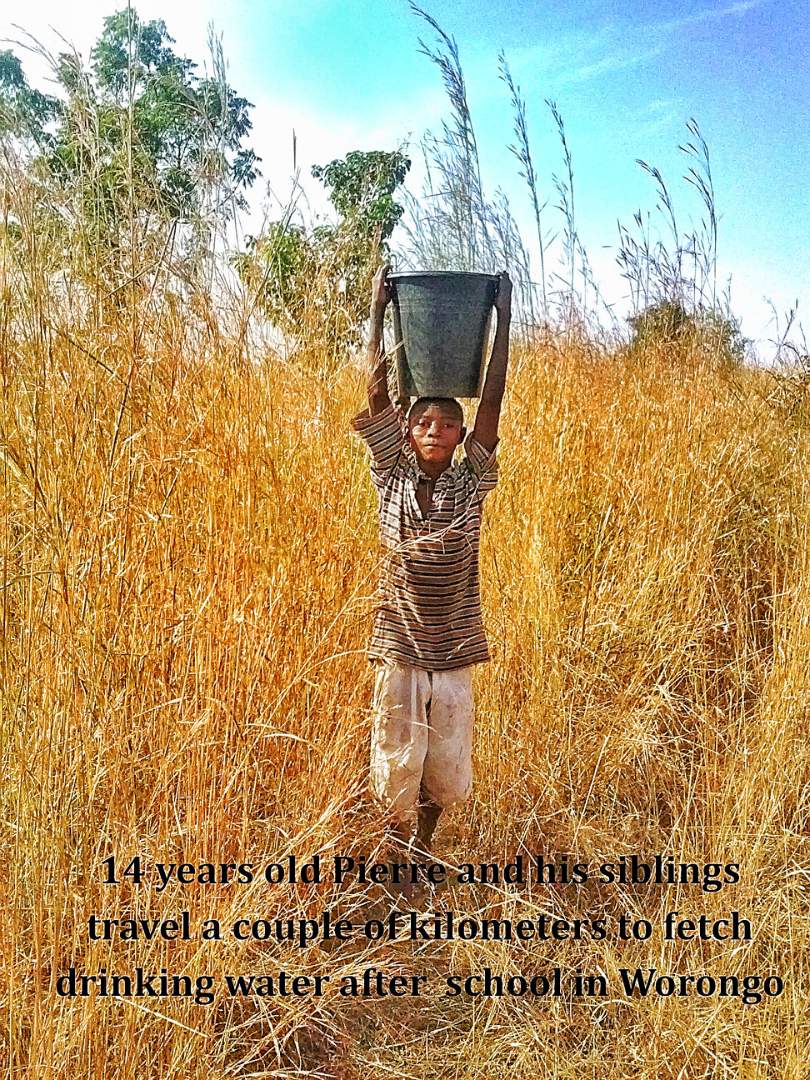 During the rainy season, most households get their drinking water from shallow potholes that are filled with run-off. This run-off is usually yellowish in color and filled with particulate matters. Often times, these water sources are shared with animals. Drinking from this water source often leads to illnesses such as diarrhea, dysentery, and in some cases death particularly among children less than 7 years old.

During the dry season, these shallow potholes dry out, leaving residents with the difficult task of traveling long distances to either buy water, or fetch it from a distant well. This is particular daunting for young women and boys during school year. This is because they not only have to get up early in the morning, sometimes 3 AM, or late at night, to fetch water. Then they also have to come back, do house chores, and make breakfast or dinner before doing their homework or going to school. This provides a reasonable explanation why most young women are more likely to fall behind in school or drop out compared to their male counterparts because of inadequate time to do school work. Even if they may have time to do school work, they may be too tired to concentrate. Also, lack of access to potable water nearby leaves young women vulnerable to attack such as domestic violence at home due to husbands being suspicious of amount of time taken to fetch water, and rape from outside while fetching water early in the morning or late at night.

The decision of the schools at which to install the hand washing stations was based on three main criteria: access to water to fill the water tanks, number of pupils in schools, and the percentage of students who stay in school during long breaks.

WELLS Seven of these public wells will be built in the same town, Kante, but in different neighborhoods: Yoote Wooro, Ate-Kante, Kpantchoute, Hourta, Worongo, Kouwir, and Ninta-Ninta. A local digging expert, with the help of local community members, will supervise digging. This local expert has a wealth of experience digging holes in this region.

Also, a cement drainage system will be constructed to direct water in to a nearby vegetable garden or a hole. A bucket and a rope will be used to pull water out of the well. Water Charity funds will be used to pay for skilled labor, to purchase of cement, and to transport  materials.

The various communities will provide volunteer labor during digging and construction, gravel, sand, food for workers, and storage of materials. The remaining well will be built in a village called Kpesside, near the only clinic in the area. The reason for this location is to help patients with their hygiene and sanitation needs, especially pregnant women before, during, and after delivering.

PUMPS Three hand pumps will be rehabilitated in three villages (Houlure, Anatowa, and Nambou). A local technician has already estimated the costs of rehabilitating/repairing these pumps. The costs were determined by diagnosing each pump, and deciding what parts should be replaced or renovated. A couple of these hand pumps have been out of service for more than three years as a result of lack of finance by the communities. As a result of this, community members have to walk for many kilometers to fetch water. Parts will be bought immediately for the repair work to begin. For the past six months, every household in the various villages has contributed some amount of money to meet the community contribution of 25% of the total repair cost. The various village development committees have been in charge of collecting the community contribution.

Monitoring and Maintenance
Monitoring and maintenance of the wells and hand pumps will be done by each community’s Village Development Committee, or their Water Committees. The various Water/Village Development Committees have been trained on how to sustain their hand pumps and wells. For example, committee members and villagers have been educated on the importance of yearly monetary contribution for future repairs. The various schools’ Sanitary Committees, headed by the school principal, will maintain the hand washing stations.