The project was to build a new bathroom at Kanorejo SDN 01. 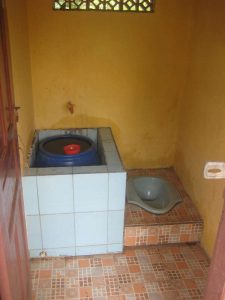 because of major cracks in the poor foundation which caused cracks in the mandi (tub for holding water) which led to leaking. In addition, during the dry season, the water table is so lowered that the school pump does not go deep enough to find water, and so no one at the school has access to water.

The roof was removed and the interior and exterior walls repaired, re plastered and painted. A new mandi was built and tiled and a new squat toilet was purchased and set in a fresh and level platform. A new roof with a generous overhang to protect from rain and sun was built. The floor of the bathroom and the raised porch were tiled with ceramic tile which helps in keeping the bathroom area clean. The original bathroom had only cement floors which were difficult to clean. 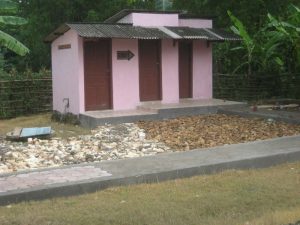 The work was done by a skilled mason and his helper who were paid from the Water Charity funds.

The children, the teachers, and the community are grateful for their new student bathroom and send their thanks to you. In April, the school hopes to complete the new well so that next dry season the students and teachers of SD2 will have water throughout the entire year.

We are grateful to Mary for seeing this important project through to completion.