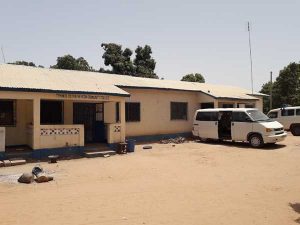 Community Description
Kaiaf Village is large with a population of about 3,000. The Kaiaf Minor Health Center serves 18 surrounding villages plus villages across the Senegal border in Casamance. The Kiang East area has a population of approximately 7,300. The clinic logs 500-700 patient visits per month plus 25-30 deliveries per month. There is sixteen staff, some paid, some volunteer. 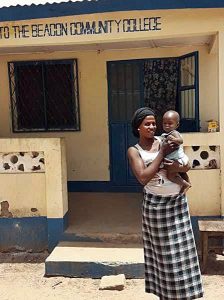 Project Description
This project is to improve the water and sanitation of the clinic by installing a new solar pump, providing a storage tank, and adding a washbasin and toilet.

The project consists of the following:

*Installing a new submersible, 24v solar pump with controller and dedicated 250 W, 24 v dedicated panel.
*Replacement of the existing leaking tank with a new, double-walled, 2,000-liter plastic tank.
*Running 25-meters of piping from the tower to the ward.
*Installing a washbasin and toilet.

7,300 people will benefit from the project. 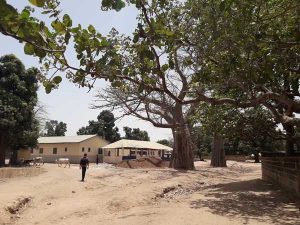 This project is part of our ongoing Western Africa Water & Sanitation Program, and donations using the Donate button below will be allocated to projects in that program.

This project has been completed under the direction of Mike McConnell, Managing Trustee, GambiaRising, and former Peace Corps Country Director in The Gambia. To read about the start of the project, CLICK HERE.

The project was designed to improve the water and sanitation of the clinic by installing a new solar pump, providing a storage tank, and adding a washbasin and toilet. 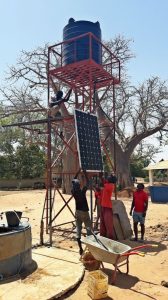 Over a period of two weeks, the water project at the Kaiaf Health Center was completed with some hard work and very satisfactory results.

Our team, led by David Levine and Ebrima Marong of WAME (West Africa Medicine and Education), arrived two hours before sunset and the clinic staff and some villagers wanted to start the project immediately. New fittings were installed in the new water tank and the old, leaking tank was lowered from the tower and the new one hoisted up. Meanwhile, trenches for the pipes were being dug by members of the community.

On the morning of Day Two, Pa Boy Jatta, our plumber, was at work at 6:30, laying pipe in trenches ready-dug by villagers. He installed a washbasin in the delivery room and replaced a ruined toilet in the adjoining room. Much of the plumbing was discovered to be badly deteriorated and working into the night; this he replaced, running new piping from the water tower to the clinic building and all the way to the staff toilet facilities. 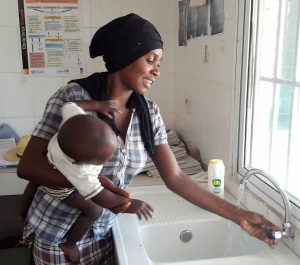 The old broken pump was removed and the new pump was installed in the well with new piping up to the connection for the water tank.

A welder built an extended frame to couple a new 250-watt solar panel. The old panel was retained, since it was still working well, and the new panel coupled to it. We found, however, that the new panel was not putting out enough voltage. We eventually detached it, tested it separately, and found it to be defective. The pump still worked with the old panel, but not at full capacity.

We allowed several hours for the tank to fill, and women began getting water from the standpipe by the water tower as soon as it was feasible. This saved them from having to go several hundred meters further away carrying heavy tubs of water. There was quite a bit of excitement! Inside the clinic, the staff was also jubilant. 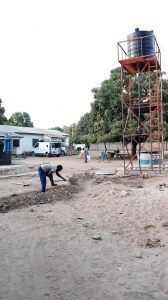 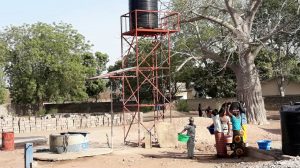 We took the defective solar panel back to the vendor, who was gracious as far as replacing it. We tested the new panel, found it working correctly, and project manager, Ebrima Marong, and solar technician, Saikou Gibba, installed the panel the following weekend. They report that the pump works extremely well with the two solar panels in place.

The clinic staff were extremely helpful in the entire process and were delighted with the results. They have been for some time having to haul water from a distance, and it goes without saying that trying to run a health clinic without running water is not an acceptable situation.

Our thanks go to Water Charity for making this project happen.

We would like to emphasize that great effort was expended making sure that good value was obtained in purchasing and that the funds were spent wisely. Funding for projects such as this is critical, and we do not take it lightly.

Here’s an 8-minute series of vignettes taken as the project progressed: https://youtu.be/GvCfqU8S8SQ

Here’s a 2-minute video excerpted from the longer video with only the results: running water and thank yous: https://youtu.be/EyldeRai53Y

We extend our thanks to Mike and the GambiaRising team for completing this important project.