Community Description
Kabacoto, meaning “House of Brothers” in the local Pulaar language, is a close-knit village located in the heart of Senegal’s Peanut Basin about a kilometer from the salty Bao Balon River, which provides the village with much of its fish for its traditional meals.

An ethnically Pulaar village, farming and livestock raising comprise the primary sources of income for members of the community, though activities such as gardening on both an individual and community basis provide supplemental income, especially amongst the women and their concomitant women’s groups. In particular, crops such as peanuts, millet, and corn dominate the farming landscape, and as is common among this ethnic group, cow herding is prevalent across the area, a reality which poses serious food security issues due to grazing and unprotected fields.

Founded in 1408, the village has since swelled to a population of two thousand people, which has put additional pressures upon both the financial and natural resources of the community.

The village hosts a primary school and a small middle school operated out of a two-room building that was constructed for the purpose of and doubles as a grain storage facility for the farming community. 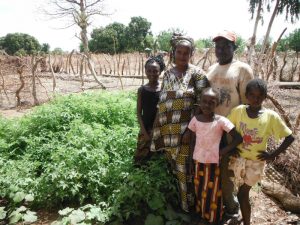 Temporary classrooms comprised of old millet stalks reconstructed annually after collapse from heavy rains each season accommodate the overflow of Kabacoto’s middle school population that cannot fit into the grain storage facility, and the middle school shares rooms with the primary school across the village due to a carefully-planned classroom rotation schedule.

Also characteristic of Kabacoto’s population are large families sharing small spaces, especially with many children. While most of the village has been able to afford latrines, there are several impoverished families whose subsistence needs leave them unable to save enough money to construct their own latrines, with entire families simply using the unsanitary practice running behind their houses to defecate on the ground, to the “bush,” or to the closest neighbor’s house who has a latrine each time the need arises.

Project Description
This project is to build 7 pit latrines in Kabacoto.

Participating families will provide the labor to dig the pit latrine holes, obtain the soil for bricks and platforms, and provide water throughout the entire process.

Water Charity funds will be used to purchase materials, including cement, attachment wire, and metal rods, as well as the mason labor to create bricks and platforms for each latrine.

The project is largely being organized by a local counterpart, Bocar Diallo, who has experience working with development organizations and is well-respected within the community. 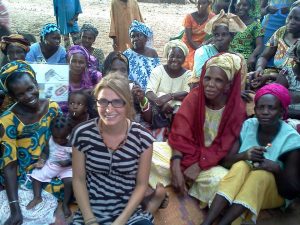 Participating families have already begun to dig their own latrine pit holes at safe and appropriate distances from both wells and cooking spaces, and are gathering soil for the construction process. The masons have already been chosen and agreed on a fixed price for the labor required for each latrine such that the project can be completed in a timely and efficient manner.

Furthermore, because the importance of latrines lies not with just in their construction but also their maintenance, the village’s women’s groups—Ferigido, Adi Jamm, Foeray Liñul, and Bomtere– have been trained with regard to proper latrine maintenance, hygiene, and sanitation issues with the assistance of a local relay, Binta Ndiaye, who works at the health post.

Project Impact
The latrine project will bring pit latrine technology to eight families in seven households within the village of Kabacoto. A total of 51 adults and 57 children will directly benefit from the construction of the latrines. One of these seven households hosts a daara Islamic school six out of seven days of the week in both the mornings and the evenings, bringing an additional 15 children into the household which already comprises 11 people without a single latrine on the premises.

Comments
This is an important infrastructure project with widespread community support. It will have a significant effect on hygiene and health in the village.

Dollar Amount Needed
$0.00 – This project has been funded through the generosity of the Elmo Foundation, with the help of friends and family of Peace Corps Volunteer Amanda Grossi.

We encourage others to continue to donate using the Donate button below, and we will notify Amanda of your donation. Additional funds will be used to fund the next project by Amanda and/or those of other PCVs in the country of service.