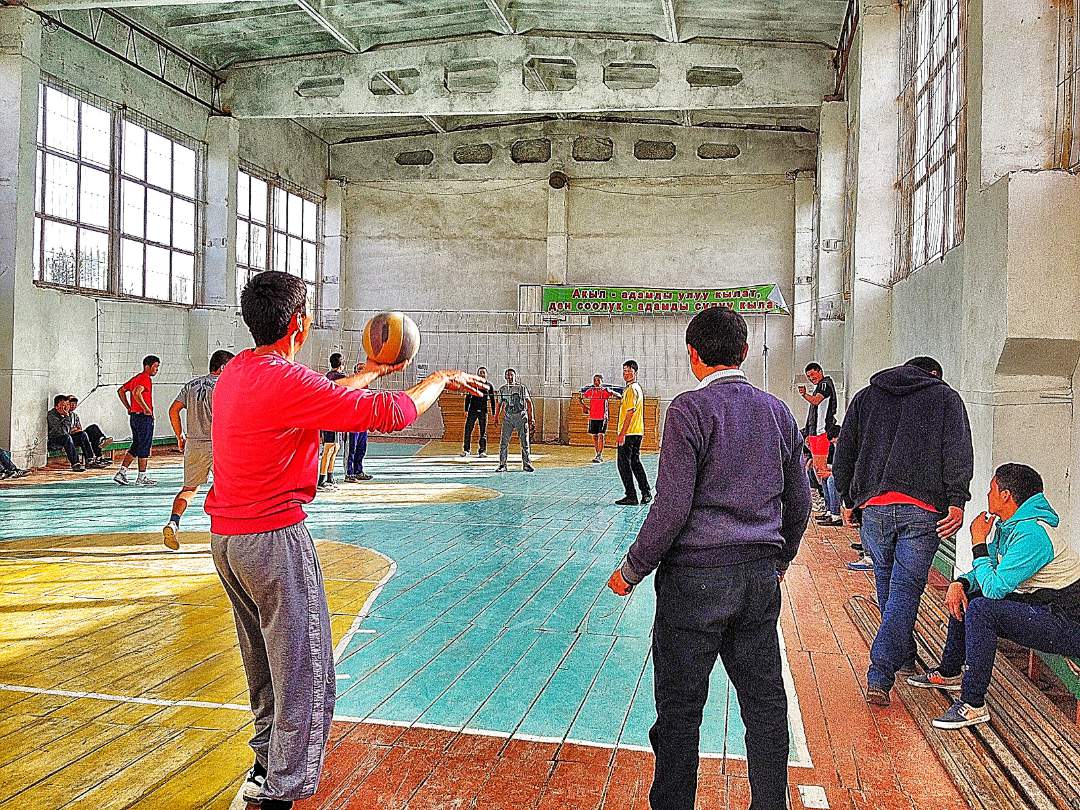 There is only one school in the village, called School 41, which has 302 students (157 girls and 145 boys), 26 teachers (24 women and 2 men), and 7 other staff members (1 maintenance man, 3 cleaning women, 1 security man, 1 grounds keeper, and 1 cook). Sixth – eleventh form students attend school 6 days a week in the morning while first-fifth form students attend 5 days a week in the afternoon. The school is publically funded and also hosts community events, such as sports and meetings, being the only public building in the village other than the tiny, intermittently open clinic.

The village of Jon is a community of ethnically Kyrgyz people while the raion of Bazar-Korgon is predominantly ethnically Uzbek. Jon is an agricultural and bedroom community for the neighboring town of Bazar-Korgon (that is, almost all workers who work in the fields or outside the community), is relatively poor compared to neighboring communities, and has reported unemployment of 70-80%. 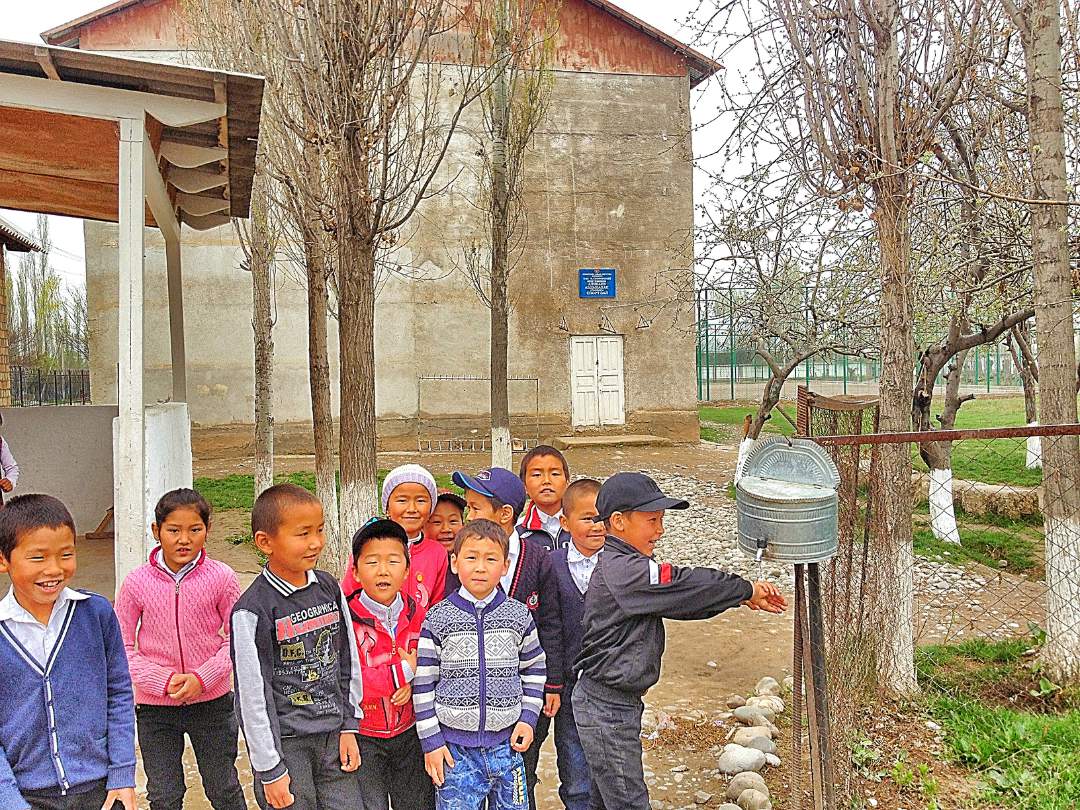 Currently, the school has one hand washing station exterior to the school, filled by bucket from the nearby canal that the students and staff can use to clean their hands. Unfortunately, it is under-used, likely in part due to poor maintenance and the fact that it cannot be used in excessively cold temperatures as the tap freezes (November-February).

A survey of the school revealed that almost all students and staff (95%) interviewed use the outhouse at school. This survey additionally revealed high rates of absenteeism due to diseases (overall 2.6 reported days/month, ranging from 1.1 monthly days reported by 11th form to 4.2 monthly days reported by 10th form) and menstruation (1.7 to 2.5 reported monthly days reported by women and girls of apparent maturity). Appealing hand washing facilities would reduce disease spread and allow female staff and students to attend more days of school/work per month. Further, few people surveyed were able to list the correct times to wash hands (an overall average of 0.4 correct answers per survey taker from 5 pre-defined correct answers to an open-ended question).

A local nurse, who works at the raion HPU, identified the issue of poor hygiene at the village school. She consulted with the school director and identified priorities for facility improvement to improve school hygiene. These are sinks for hand and dishwashing in the existing kitchen and eating building, an-add-on facility to the existing school gym for showering, and the construction of a small new structure to house a hand washing station in proximity to the existing outhouse.

Currently, the only facility is an exterior hand washing station filled by bucket.  62% of survey takers reported using the hand washing station even though spot-checks showed it to be empty every time checked, 20% reported washing their hands in an irrigation ditch, 20% reported washing their hands in the kitchen and eating room presumably using a dipper and bucket, 5% reported using rain water, and 2% reported using snow. To support the proposed facilities, a small pump for the existing water cistern, a drain pit for wastewater, a hot water heater, and piping is needed. Additionally, a training program to educate on proper hand-washing timing and procedure and instill good habit is necessary. The training combined with remodel will together reduce absenteeism from school thus improving education.

Project Description
This project is to implement the UNICEF “TopTaza” training program, build a shower at the existing gym, build a hot-water hand washing station near the existing outhouse, add sinks for hand and dish washing in the existing kitchen and dining building, and build associated infrastructure (piping, waste water, pump, and water heater).

Funding will be 50% from Water Charity, 25% financial support from the Beshik-Jon Ayil Ukmut, and 25% community in-kind matching labor and transportation costs.Funding priorities were made by the director of the school, the idea originated with a local nurse who works for the raion HPU, and plan made by both of them in combination with a local contractor.

There will be numerous positive outcomes from this project.  Here are the expected goals: reduction in the spread of communicable diseases (especially Hepatitis A, colds and flu’s, and diarrheal diseases) through the village school in the community at large, improvement of hygiene knowledge and habit which will percolate through the community, short-term employment opportunities for this cash-starved village, reduced absenteeism from school, and reduction of gender inequality in education. Specifically, the aim is for every student in the school to be able to name at least 2 times when hand washing is critical and be able to demonstrate effective hand washing with soap.  The school hopes an observational study of hand-washing will show 90% effective hand washing with soap (improved from 0%); and that absenteeism reported due to both illness and menstruation will reduce by 1 day monthly.

This project consists of two parts: the actual infrastructure remodeling and the training. For the infrastructure, first, all the necessary supplies (concrete, piping, pump etc.) will be purchased and brought to the school. Then workers will build and install the components. The training will be accomplished through implementing UNICEF’s TopTaza program. This program relies on training students in each class to act as a health aid monitoring and encouraging hand washing. The classes compete to achieve the best hand washing compliance and the bulk of the work is performed by students with assistance from staff and training personnel.

Monitoring and Maintenance
The new infrastructure should last many years.

Currently, nation-wide, Kyrgyzstan is experiencing a paradigm shift. People in villages frequently state that they feel the responsibility of their government is to provide flowing water systems to every village. This appears to be a reach for modernity and correctness. Government offices appear to feel this too as multiple officials have voiced village water systems as a priority (already the norm in urban areas).

As the country builds modern water infrastructure, value will occur only when people adopt matching modern practices. Jon village, via this school infrastructure and education/training project, will be ready to jump when public water infrastructure reaches their homes because they will understand the value of the change and have hygiene priorities in line with those of public health. In this way, this small project will have long-reaching influences. 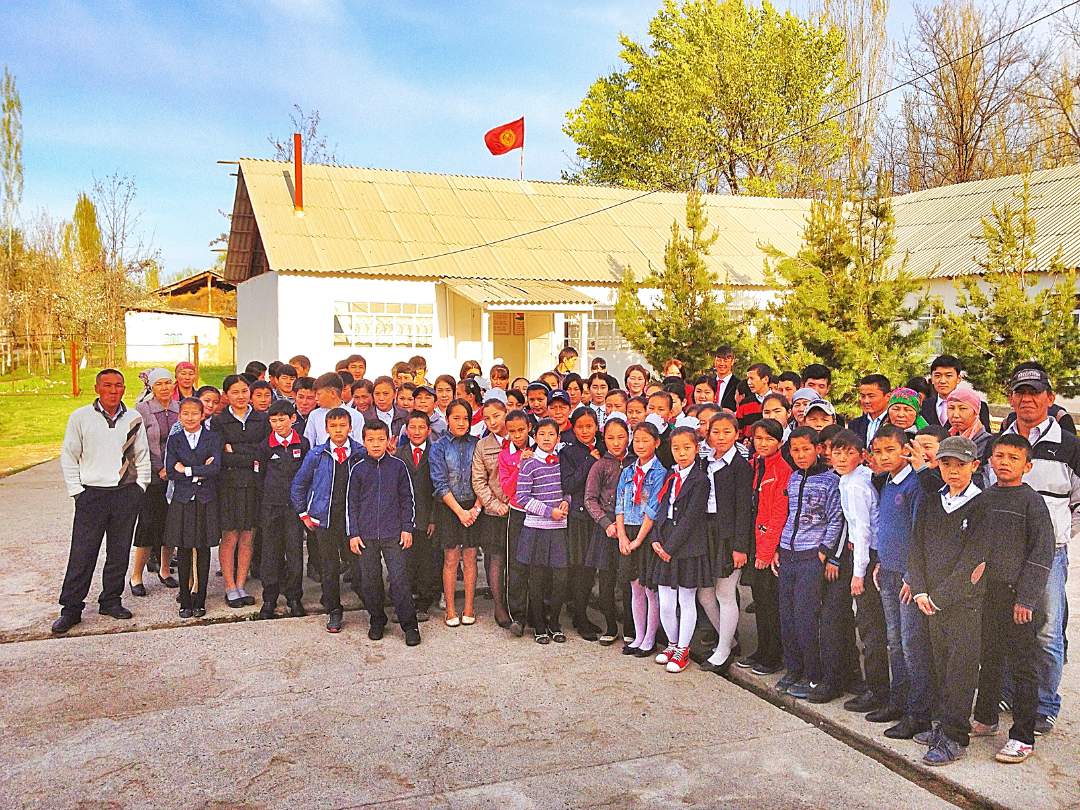 The school has committed to the increased water, soap, and electrical costs that will be incurred as a function of the proposed facility improvements. The facility improvements are simple and any maintenance needs should be well within the ability of the staff already at the school.

Let Girls Learn
According to the Global Public-Private Partnership for hand washing, adequate hand washing facilities increase school attendance by girls by up to 6 days per year. This project will reduce absenteeism of students and staff (which is predominately female) due to menstruation. Absenteeism due to menstruation by females of apparent maturity is reported at 1.7 to 2.5 days per month.

Dollar Amount Needed
$0 – This project has been fully funded by friends and family of Peace Corps Volunteer Marguerite Leeds.  Additional donations will go to other projects in Kyrgyzstan. 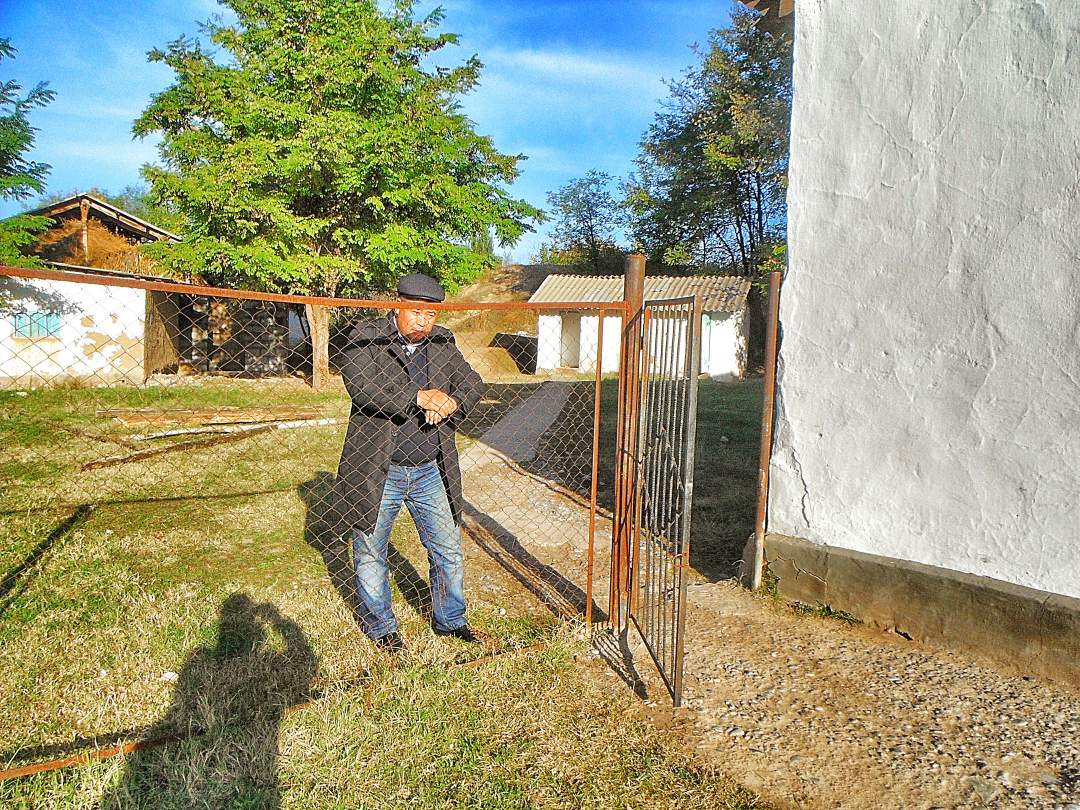 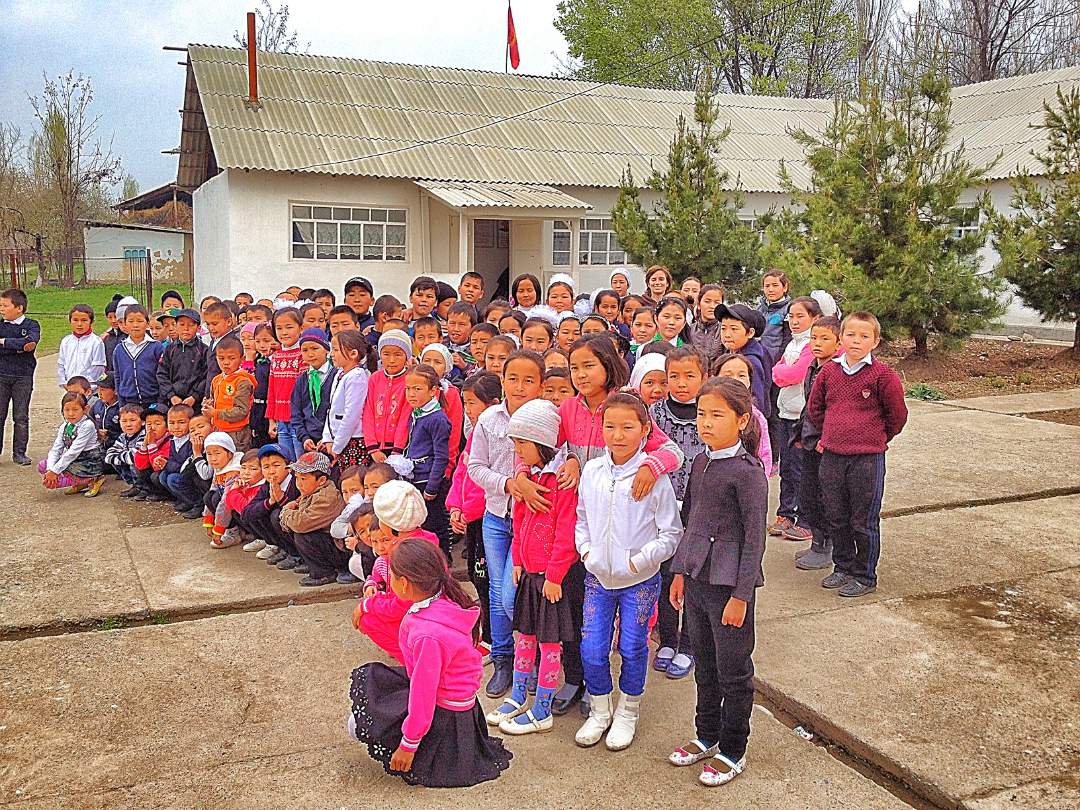 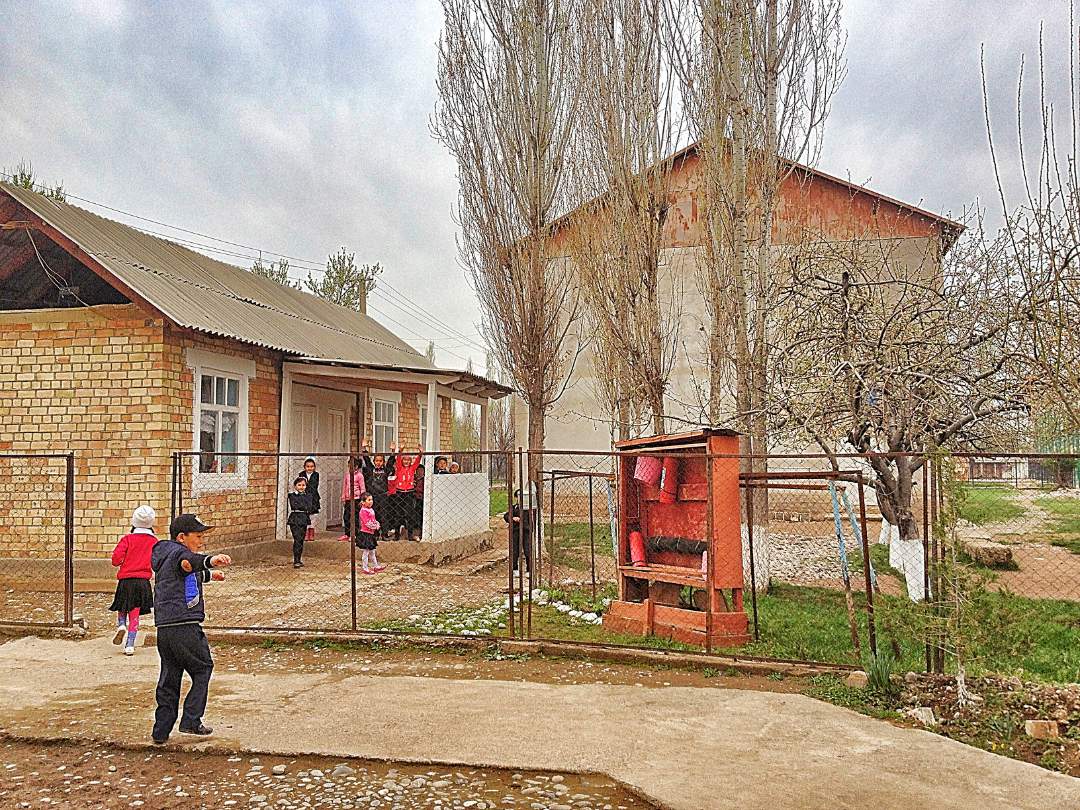 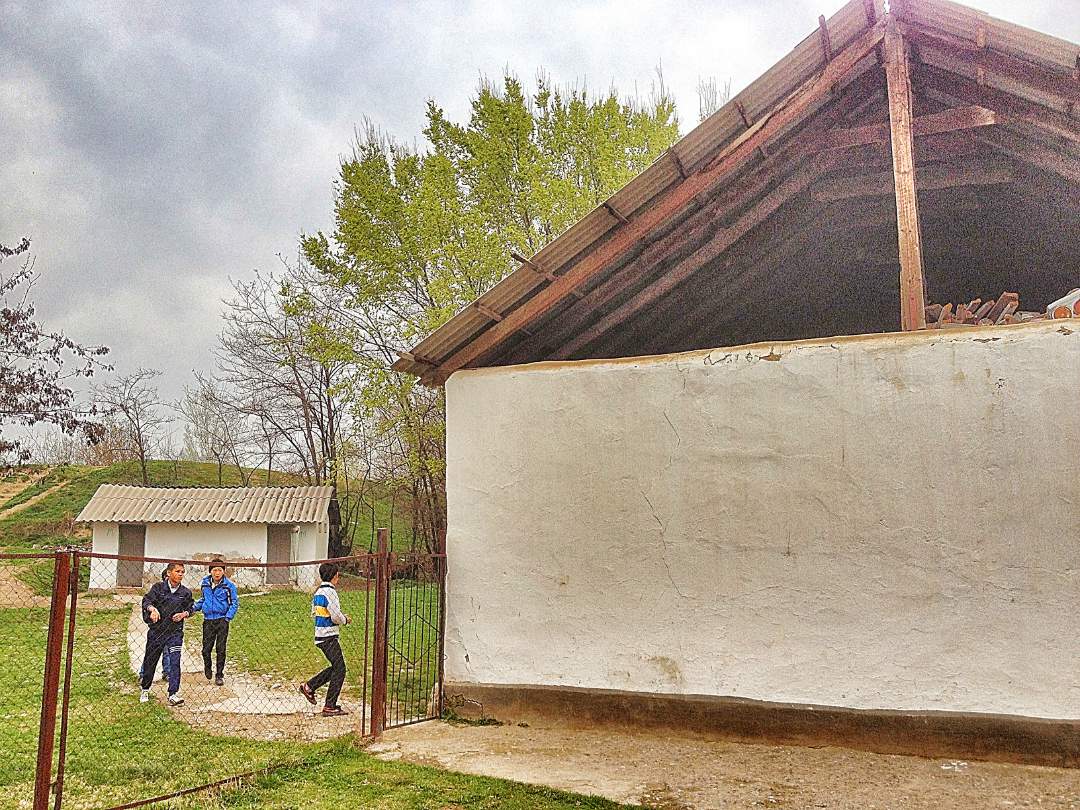