The Lower River Region is divided into six districts: Jarra East, Jarra Central, Jarra West, Kiang Central, Kiang East, and Kiang West. In the early nineteenth century, Jarra started as one of the nine Mandinka kingdoms located along the south bank of the Gambia River. Jarra was subdivided into Eastern and Western Jarra in 1966 and into Jarra Central, Jarra East, and Jarra West for the first National Assembly election in 1997.

The Lower River Region, and Jarra East in particular, is the area most vulnerable to the transmission of the COVID-19 virus from Senegal. While by the end of May The Gambia has 25 confirmed cases, Senegal has 3348 confirmed cases. People from Senegal fleeing the virus or fleeing their country’s quarantine put Jarra East’s population at risk. Jarra East’s citizens would be greatly assisted in their fight against COVID-19 by an ample supply of water for hand washing. As such, each of our projects in Jarra East will include a handwashing station with several weeks’ worth of soap. We will work with each village’s Water Management Committee on hand-washing sensitization and on the continual provision of soap to the handwashing stations. 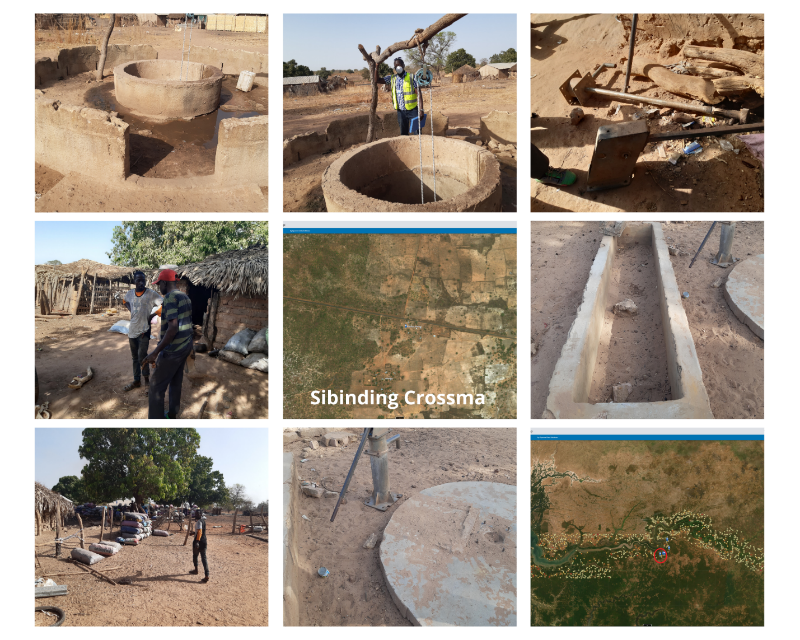 In 2010, Jarra East had 43.5 hectares of tree cover. Much of that tree cover—to the degree that it still exists ten years later—lies in the southern corner of Jarra East, adjacent to Sibinding Crossma. Due to poor rainfall and resulting meager harvests, Sibinding Crossma’s population of roughly 350 people in recent years have had to resort to cutting down local trees to make into charcoal for sale in the suburbs of the capital city of Banjul.

Sibinding Crossma is located alongside the South Bank Road while the community of Sibinding is several kilometers off of the road—to the south, toward Senegal. Currently, villagers from Sibinding Crossmab have to walk all the way to Sibinding to fetch water.

Sibinding Crossma’s need for improved water access is urgent. Sibinding Crossma has an open well that risks contamination. The village is looking to have a handpump installed on the open well. The village has already acquired some hand pump parts. In addition, the village needs seven stainless steel pipes, a new cylinder, a new conversion head, fencing with a trough for animals to drink, as well as a new concrete slab, new bearings and a chain. All new parts will be installed by a reputable contractor. 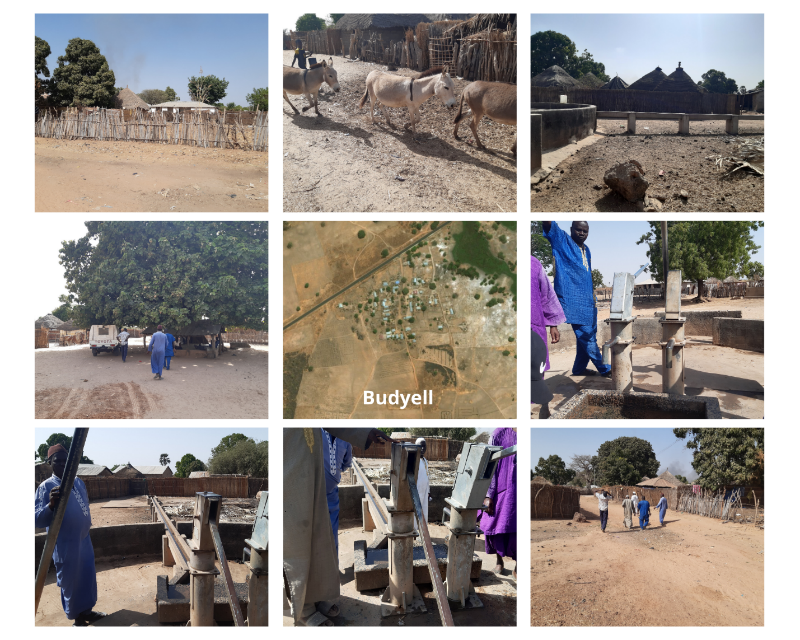 Budyell is a village made up of approximately 500 traditional nomadic Fula tribe members. Like Sibinding Crossma, though further into Jarra East, Buddyell is located just off the South Bank Road. The community of mostly subsistence farmers—growing millet, groundnuts, and maize, as well as rearing cattle—suffers from a lack of water.

Like many rural villages in The Gambia, when the village of Budyell was looking to fix its well with its own resources, it could only raise enough money for a cheap and poorly made Chinese well pump. Though there is a second well in the village, it is insufficient for the entire village. There is always a long queue until mid-day when the well runs completely dry. When the well dries up mid-day, the villagers of Budyell normally travel to Wellingara Ba to fetch the water they need for drinking and domestic uses.

To fix the pump, a trusted contractor will install a new cylinder and new conversion head. The contractor will also need cement to fill in cracks in the well’s slab cover and to stabilize the trough for watering domestic animals. 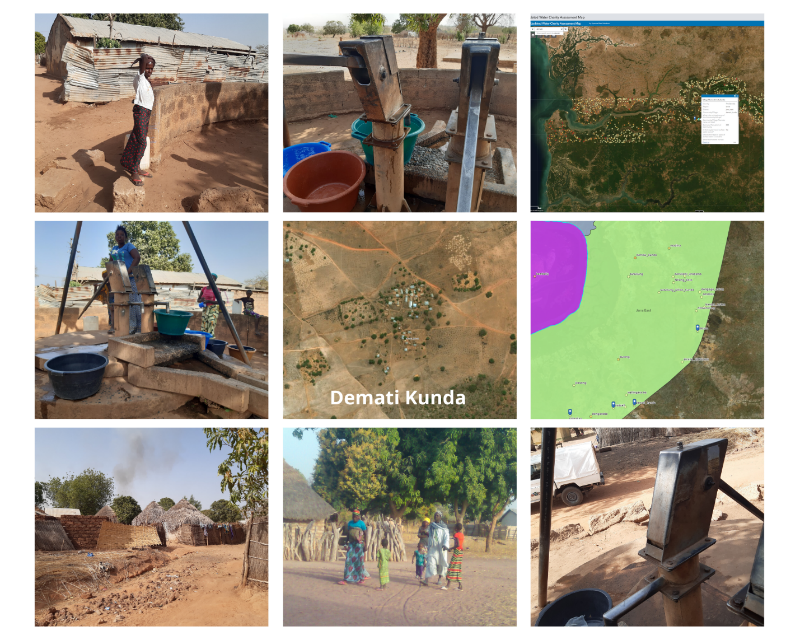 The Village of Demati Kunda is further east into Jarra East, about 10 kilometers off the South Bank Road, close to the border with Senegal. The Village is home to about 830 primarily Fula tribe members, along with a smaller community of Mandinka tribe members. The community members depend on the subsistence farming of maize, millets, and groundnuts.

One of the village’s wells – one the community relies on for sufficient water for all 830 villagers – has broken down. The well’s pump needs a new conversion head, a new cylinder, and new fencing, along with concrete for a trough. In addition, the skilled contractor will replace the chain, bearings, and four stainless steel pipes. 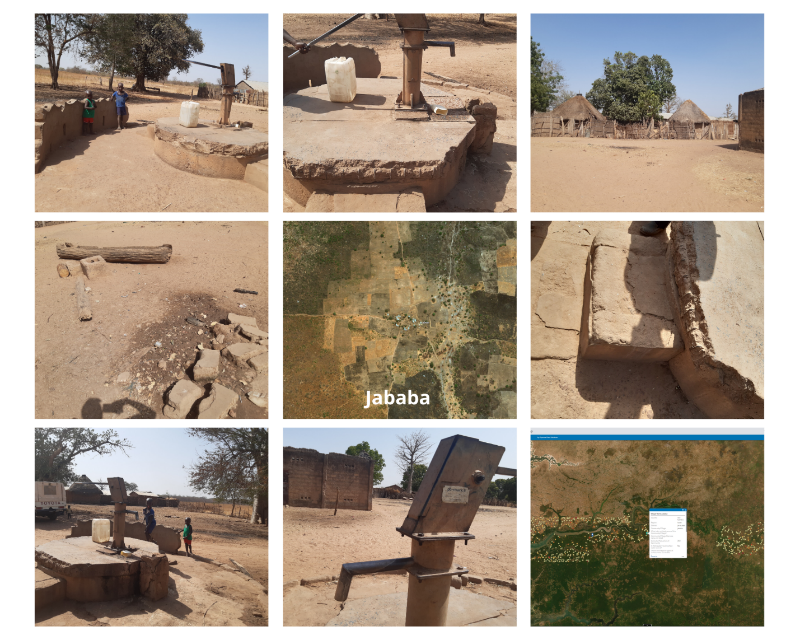 The Village of Jababa is populated by approximately 240 people. Jababa is 2 km from Southbank Road coming from Welingara Ba coming from Pakaliba. Like Demati Kunda, Jababa is made up of Wollof and Fula tribes, as well. Jababa was originally founded by the Fulas but the traditional Wollof Fana Fana later migrated there. The two tribes live peacefully together in Jababa. Like the majority of rural The Gambia, the community survives off of meager incomes from subsistence farming. The whole community depends on one pump that is out of service. The community has been collecting from neighbors toward a community contribution to a rehabbed well.

The well needs a new cylinder. Our reputable contractor will erect new protective fencing, build a new trough, as well as replace the well pump’s rod couplings and bearings. 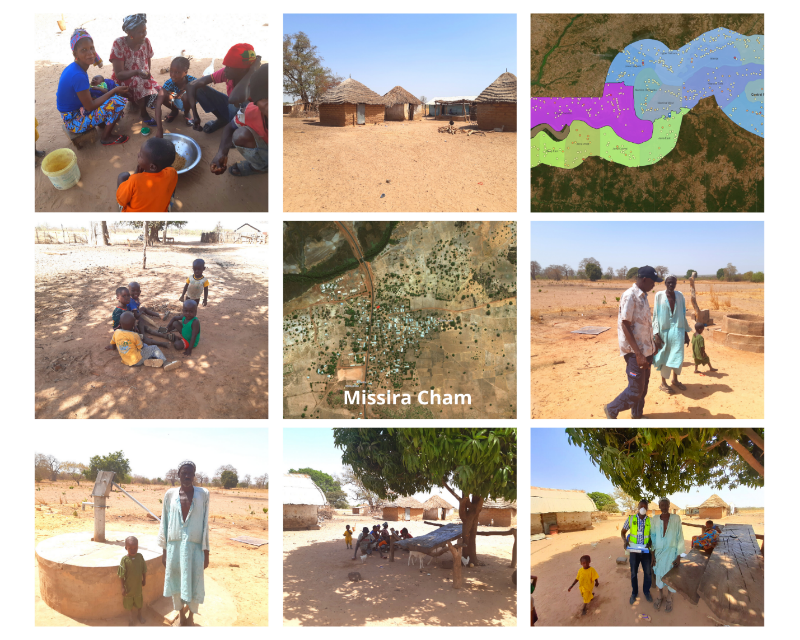 Missira Cham is a village located at the uppermost border with Niamina East, along South Bank Road. The community is made up of approximately 150 Wollof and Fula tribe members who depend on the subsistence farming of maize, millets, and groundnuts.

The Village of Missira Cham has a well with a pump that needs repair. A reputable contractor needs to install a new cylinder and bearings, as well as 7 new stainless steel pipes. The well also needs concrete fencing to keep animals from contaminating the area around the well. The contractor will also need to install a brand new cylinder and bearings.

All five villages have received and are benefiting from the newly reconstructed hand pumps! The Water is Flowing in Jarra East. We would like to thank Drop4Drop for generously funding the Jarra East Hand Pump & Hand Washing Tour!

Check out a short film about our COVID-19 Hand Washing stations, some of which features Jarra East: