This project has been completed under the direction of Peace Corps Volunteer Caitlin Baumhart.

A summary of Caitlin’s report is as follows: 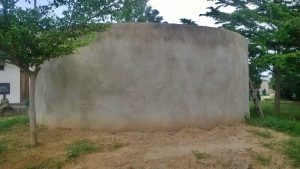 Scope of the project

Ilulu Girls’ Secondary School in Lindi region lacked a source of clean, safe drinking water for its students, which is essential to prevent the spread of preventable water-borne infections and diarrhea amongst students (especially those living in close quarters). Providing a solution to this problem would help students to better focus on their studies rather than suffering from preventable diarrhea, dehydration and water-borne disease.

In order to solve this problem, the Ilulu Water Committee, consisting of the school’s headmistress, six teachers, the Kilwa District engineer and the PCV, was established. This committee then designed a project to build two 5 x 5 rainwater catchment tanks to collect rainwater to fulfill the school’s needs. This water will be used solely for student drinking water, not for washing clothes, cooking or other tasks. In addition, these tanks will be used in conjunction with SODIS, the solar water purification process, which uses the sun’s UV rays to purify water that will be safe for consumption.

The project was completed in January, 2017, after the Water Committee members held all sessions to educate the students about water safely and the proper method of SODIS solar water purification. Due to its simplicity, the use of this highly effective solar water purification method was easy for students to take home and educate their families, spreading the possibility for clean drinking water all around the region and allowing for long-term sustainability in addition to short-term immediate access to clean water for the students.

Idea behind the project: Ilulu Girls’ Secondary School is an all-female boarding school, which is known for academic success, in Lindi region of Tanzania where 652 female students live and study each year (this was the number back in 2015, the number has since increased because Advanced Levels are now available unlike before). The number of students who go to the hospital due to diarrhea and water-borne diseases each week is incredibly high. 48% of all students going to the hospital each week are suffering from these ailments, though it is difficult to get an exact number because not all students go to the hospital when they are feeling ill since they are required to walk the distance to the neighboring village.

How the project began: The idea of this project was proposed by Ilulu Girls’ Secondary School staff members, and was driven by the need to obtain safe, clean drinking water for our students. The staff members formed a Water Committee consisting of the following people to address the school’s drinking water problem: Headmistress Sarah Mlaponi, the district engineer, and six teachers: Sir Chacha (also a member of the school board), Madam Fatuma, Madam Asha, Sir Ng’itu, Sir Alex and Sir Steve. The Peace Corps Volunteer (PCV), Cait, was officially invited to be a part of the committee after the committee came and asked for help on how this project could be feasibly implement here at Ilulu.

Water Committee was officially started in May 2015 and it was determined that the best plan of action was the construction of new, high quality rain catchment tanks. The meetings in July and August determined the size and placement of the tanks, created a budget for the project, organized the community contribution, and finalized a project schedule with monitoring strategies. 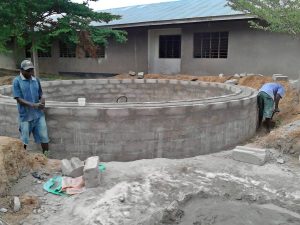 Acquiring Supplies and Construction: Obtaining the different supplies from different areas took almost an entire month. The committee members and headmistress traveled to purchase construction supplies. Some supplies were taken right from the village such as timber and water, which was easy to organize, while others such as Cement, Aggregates (stones and sand) and gutters and tin were taken from Dar, Kilwa and Hoteli Tatu and Lindi, respectively.

After the cement and aggregate was delivered to the school on trucks (this took multiple trucks and trips) the students helped carry water for the bricks to be made. This was added to their daily water fetching duties. Instead of the one required bucket for cooking purposes, the requirement was made to be two buckets. One for food and one for the bricks. The students rotate on this duty so the classes without national exams only had to carry water once a week.

Then brick construction began by the engineer and his fellow workers. This, along with masonry and plastering took place between the months of February and April. This took a bit longer than calculated as the rainy season had begun. This meant that many people had to tend to their personal farms and could not work on the tanks every day.

In May, the tank was finished by covering the outside with a special waterproof cement layer, which will allow the tanks to last longer, according to the engineer. At the end of May, the gutters, associated supplies and wood to help support their set-up were purchased. The school break is in June so very little work was accomplished during this time because everyone was away and no one was present to supervise the work.

However, school started again in July. During this time, gutters were installed on the building to collect rainwater and tin covers were constructed on the tanks. After construction finished, the Water Committee members evaluated tank construction.

Starting in August, the teachers on the Water Committee held sessions to teach the students about waterborne infection, their prevention and how to use SODIS to obtain safe, cleaning drinking water. These lessons were administered over a 10-week period. The national exams are in November, so all the teaching was finished by then.

The students who did not take national exams ended the school year with annual exams during the first week of December before going home for a one month break. Upon their return around the second week of January, an assessment was conducted by the Water Committee members to see what information they retained from the previous fall’s lessons and to assess how many of them had both shared and used this knowledge at home during the break.

The goal of this project was to sustainably improve accessibility of safe drinking water at Ilulu Girls Secondary School in Lindi Region, enabling students to spend more time learning for better academic performance.

There are now functioning rainwater catchment tanks at the school.

It was our hope that after the completion of this project the waterborne diseases will be reduced by at least 40% among Ilulu Secondary School students and that the hours lost to hospital visits would be reduced by 40%.

In 2015, before the tanks were built, 48% of all students going to the hospital each week were suffering from diarrhea. However, it was assumed that more students were falling ill, but not going to the health facility due to the distance.

After the tanks were completed, data from the school’s hospital logbook was analyzed for the remaining months of August through December. 33% of all students going to the hospital reported having diarrhea during that time. The committee would like to reassess in June, 2017, and again in December, 2017.

We hoped that at least 80% of the students would transfer these techniques to their home lives and teach their families. Statistics are still being collected.

Reactions and quotes from the community

Here are a few comments:

“We are thanking you for donation yours! Thanks for kindness, for we are all happi (happy) now and not suffering”

“With this clean water we can now stop to suffer. We are very happy and greatful (grateful)”

“My aim is to greet you and thank you for your help in donations. We now have water for drink that is safe. I am not afraid now. My studies can go well and I will not suffer. Please do not stop to donate. Good behaviors help all and you have helped us xo (so) much. May God bless you and your life. Sending love and happiness”

We are grateful to Caitlin for completing this important project. 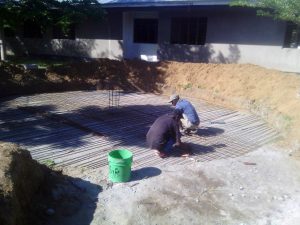