Community Description
Ilela Village is located in the region of Ruvuma, in the district of Mbinga. Prior to the founding of Ilela in 1976, there existed two neighboring villages named Mikalanga and Malindino, both of which were founded in 1974. Thereafter, Ilela was founded by a consortium of farmers, and Ilela, Mikalanga, and Malindino formed a single ward, known as Mikalanga. 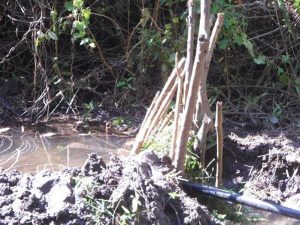 The source of water used in Ilela for personal consumption and coffee production previously accumulated via rainfall in a cement water intake. Constructed in 1999 at the top of Mount Kitessa (the mountain range which borders the village to the west), the site has since been abandoned and replaced with a temporary dam and piping system which transports water from the mountain to various points throughout the village below.

After years of erosion, flooding, and water damage, over the last 5 years the intake failed. It was not repaired due to a lack of financing, and ultimately it was ignored.

Thereafter, the village constructed a provisional dam from stones, mud, and sand to house a temporary pipe. The soil located around its perimeter is beginning to erode the foundation. Given the materials used, the design is not sustainable.

Both the temporary pipe and the water in the dam are completely exposed. Water is untreated, the pipe is beginning to corrode, and this lack of sanitation has a significant impact on the lives of the villagers.

Waterborne diseases, including cholera and typhoid, are prevalent in the village, as reflected by the number of cases treated in the village dispensary.

Project Description
This project is to rebuild the water intake system for the village. 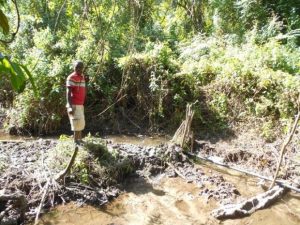 The village will abandon the existing dam made from stones, mud, and sand and develop a new cement intake several yards downstream from its current location. Water will flow from the mountain to the site of the original intake, where a 4- inch pipe measuring 20 feet in length will connect the old intake to the new intake designed by two local carpenters.

The new intake will be constructed on a raised platform and the piping will be connected to a plastic water tank (purchased locally at the expense of the village) to contain the water as it travels from the intake to the village. This will provide a stable, long-term, and hygienic source from which water is extracted for village use.

Cement will also be used to build a reinforced dam to protect the integrity of the intake to prevent this erosion from reoccurring at the new site.

The village will contribute the plastic tank, bricks, sand, and stones to reinforce both the dam and intake, as those resources (excluding the tank) are already located at the site.

This project is the second stage of a broader village-wide water preservation project in Ilela Village. Under the Ilela Village Dispensary Water Project – Tanzania, a stand was built and a 1,000-liter tank was installed at the village clinic.

Future village water system projects that are contemplated include extending secondary pipes to both primary schools and the village market for total water source redistribution.

Project Impact
This project benefits the entire population of 4,220 people in the village.

Comments
This is an integral part of a comprehensive water system program that will be a sustainable source of safe water into the future. It is well planned, appropriately scaled, and incorporates a large amount of community support consisting of labor and resources.

Dollar Amount Needed
$0.00 – This project has been fully funded, through the generosity of Michael and Carla Boyle, of Nelsonville, OH, USA.