Community Description
Ilela Village is located in district of Mbinga in the region of Ruvuma. Prior to the founding of Ilela in 1976, there existed two neighboring villages named Mikalanga and Malindino, both of which were founded in 1974. The total population of these two villages contained approximately 5,000 people.

Thereafter, Ilela was founded by a consortium of farmers led by a man named Winifridi Gwassa, who would go on to 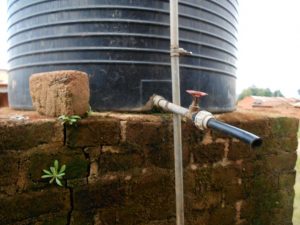 Problem Addressed
The source of water used in Ilela for home consumption and coffee production accumulates via rainfall in a principal water tank at the top of Mount Kitessa (the mountain range which borders the village to the west). From the mountain, water is dispersed to the village through a system of pipes. These pipes connect to three cement water tanks in the village, as well as numerous water faucet stations.

While the water is considered safe to use by many villagers, this is not always the case, given the range of health issues in the community based primarily on the steady rate of water-borne diseases and malaria.

One of the three primary water tanks, located near the entrance to the village, supplies water to one of the two primary schools and the health dispensary. During the dry season, the water supply, split between the dispensary and the primary school, is insufficient to meet the needs of both establishments.

The dispensary is often left without a consistent supply of water for months at a time. When this occurs, the negative impact on hygiene for both staff and patients alike is substantial. Primary school students are forced to travel upwards of a kilometer to carry water back to the primary school before, during, and after classroom hours. 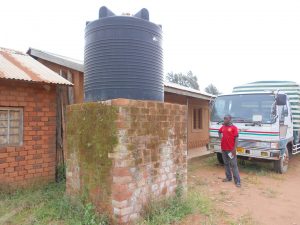 At present, the village government and district government are in joint discussions to replace the current water tank near the entrance to the village, but the timeline of this purchase suggests a considerable wait, due to other financial commitments in Ilela.

One of these financial commitments is the expansion of the dispensary, to begin within two years. The district and village governments are in the process of forming a joint construction project to expand the size of the dispensary, altering its classification to that of a ward health center. With this in mind, the overall needs of the dispensary will continue to increase gradually over time, including the necessity for a stable water supply.

Project Description
This project is to install a rainwater catchment system at the dispensary.

A tank stand will be built, and a 1,000 liter tank will be purchased from the district and installed. Gutters will be installed to collect water from the roof of the dispensary and pipe it to the tank.

The tank will also be connected directly to the main water tank in Kitessa Forest via pipe, which is already available.

The installation will be managed by a group that includes members of the village government, dispensary, and construction committee. A carpenter named Tais Mbele was selected for this project based on his specialization in water projects,

Water Charity funds will be used to purchase the tank, gutters, and other materials, including cement, wood, and nails, and pipe. They will also pay for the labor and transport.

Bricks and sand will be provided by the community.

Project Impact
About 6,000 people who attend the clinic each year will be served.

Comments
This is a low-cost high-impact project that will improve the health and wellbeing of the people of Ilela and outlying communities.