The project was to build a water catchment and storage system for the school.

Ilela Primary School Nyota Head Teacher Erick Ndunguru reflected:
“In the span of two days, my students harvested no less than 250 liters of rainwater. Our work together has been an immediate success and its benefits to our community are only just beginning to be realized.”

With joint support from district and village officials (including the Ilela Village Chairman and Ilela Village Executive Officer), materials were purchased in Mbinga District, three hours from the village center. These included the 1,000-liter water tank, cement, metal piping, plastic connectors, aluminum sheeting, and nails. They were then transported to the village.

After two rain delays, our work began on November 19th, and ended on November 30th. The two village craftsmen assigned to the work, Mr. Tais Mbele, and Mr. Bonus Ndomba, divided the installation into two components. Mr. Mbele was responsible for constructing the tank foundation, which used many of the aforementioned materials and included village contributions such as sand, bricks, stones, and water. 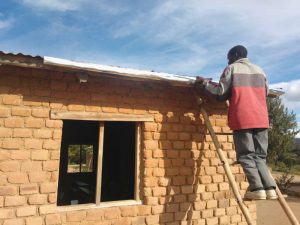 Unlike the previous Water Charity project at the larger Ilela Primary School, a stop cork for the main tank was not included; instead, a small piece of metal pipe was placed at the top of the tank to draw surplus/potential overflow water, and will be used for various on-site purposes (such as an upcoming Vertical Garden in 2014) via a third plastic pipe provided by the primary school.

Thereafter, Mr. Ndomba installed aluminum rainwater gutters directly opposite from the tank site. This division was done for two reasons. First, water stored through piping directly from the forest would provide an on-hand supply that would be both readily available and safely stored as opposed to the use of an open barrel for water collection.

Secondly, the rainwater gutters were, by design, not connected to the tank but left open for personal water collection among the students and faculty. Each day, students bring their own buckets to school, and during the rainy season will be able to fill those buckets with fresh water on site, thus decreasing use of the stored tank water, as well as the time spent carrying water from inordinate distances to the school.

The design of the gutters is such that two vertical tubes are fastened perpendicular to the horizontal gutters and are physically low enough to the ground so that even the youngest students are able to access them. The portion of the roof chosen was selected intentionally due to its immediate proximity to a natural ground slope to provide adequate runoff and reduce the accumulation of stagnant water when the gutters are not in use.

The project, overall, was a complete success. The work was completed quickly, efficiently, and with great diligence. As always, it was a fantastic learning experience for community members involved in the implementation, many of whom have, by this point, developed a real understanding of Water Charity, and its willingness to work with Peace Corps Volunteers by providing small amounts of funding that produce immeasurable outcomes.

As always, Ilela Village is indebted to Water Charity for its continued material support.

This is the first time that the primary school students will have access to two sources of water year-round, and improved quality overall will go on to positively impact the lives of nearly 300 students and their teachers.

We are grateful to Arik for completing this outstanding project, his fourth in partnership with Water Charity. We are still seeking donations to allow us to continue to fund this important series of projects. 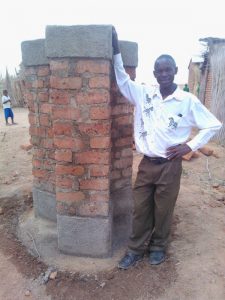 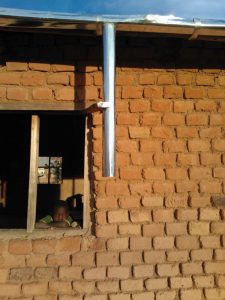