Community Description
Ilela Village is located in the region of Ruvuma, in the district of Mbinga. Prior to the founding of Ilela in 1976, there existed two neighboring villages named Mikalanga and Malindino, both of which were founded in 1974. Thereafter, Ilela was founded by a consortium of farmers, and 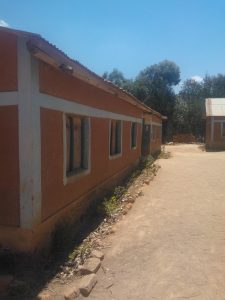 During the last village census, the total population of Ilela was 4,220. This included 2,220 family households. Ilela Primary School Nyota, the second of Ilelea’s two primary schools, serves 251 children in the community.

Problem Addressed
In the Ilela Village Dispensary Water Project – Tanzania, access was established to a safe source of water at the village dispensary.

In the Ilela Village Water System Project – Tanzania, a cement water intake was repaired and the dam at the top of Kitessa Forest (the mountain range which borders the village to the west) was reinforced.

The second of the primary schools, Ilela Village Nyota, serves a smaller, more remote part of the village, but its needs are identical. The metal and plastic water tap has gone unrepaired in the last year, and when working, the water that is released flows directly into an uncovered dirt pool.

Water storage is an immediate priority at the school due to sporadic scarcity. In addition, when water is available, there is an underutilized surplus, and excess standing water accumulates. 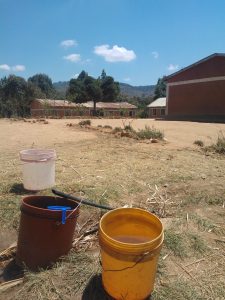 Project Description
This project is to build a water catchment and storage system for the school.

The system will include a raised platform, a 1,000-liter water tank, and piping between the Kitessa Forest water source and the school.

The platform to raise the tank from the ground will be six feet in length and width, made of bricks and cement.

A gutter system using iron sheeting will be installed to capture and transport the rainwater. A location will be chosen on the grounds to prevent the accumulation of standing water.

Water Charity funds will be used for materials, including cement, and for most of the skilled labor.

The village will contribute the bricks, stones, and sand, as well as part of the labor costs. The District Medical Officer in Mbinga will provide the transport of the tank.

Project Impact
This project will benefit over 250 students and teachers.

Comments
This is the fourth project of a concerted effort to provide for the water needs of the children of the community and the community at large.