This project has been completed under the direction of Peace Corps Volunteer Alexander Jordan. 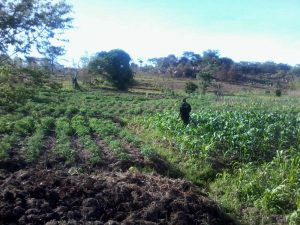 The project was to improve the irrigation system by adding water hoses to the existing pump and barrel used by each of 30 farmers.

The goal of this project was to provide 30 farmers with 30 meter lengths of hose to add to water pumps (Water for the Third World) which they had previously purchased. These pumps (powered solely by treadmill style leg pumps) allowed the farmers to pump water from a small river/creek up to barrels which, in turn, had a nozzle at the bottom for filling buckets. Though this was an improvement from the original method of simply walking down to the creek side to fill the buckets, it still took the farmers up to 3 or 4 hours to water their entire plots.

It was decided that the addition of 30 meter sections of hose to the nozzles of the barrels would allow continuous watering without the burden of having to constantly open and close the nozzle of the barrel. In doing this, the farmers would be able to save a great deal of time. The time gained would, in the case of several farmers, actually allow them to expand their plots. It would also increase overall yield of tomatoes, peppers, onions, greens, and corn in the dry season (the period for which the pumps/hoses are needed). The hose pumps would therefore increase food security by allowing farmers to harvest and provide more varied foods throughout the year. 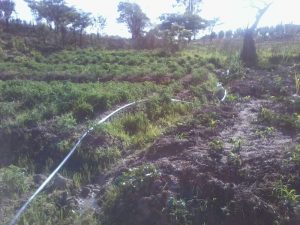 Because the pumps save the farmers time and increase the feasibility of watering larger plots in the dry season, they also increase the profitability of farming said crops as well as diversifying their plots.

Implementation of this Water Charity project was as simple as traveling to the nearby market town to buy 6 bundles of hose. Each bundle consisted of 150 meters of hose. After returning to Idetero, each bundle was divided into 5 sections of 30 meters each. Each 30 meter section was then distributed to the farmers. It took about a week and a half for every farmer to attach the hose, as some members were still assembling or moving the pumps themselves. However, after two weeks each farmer has attached the hose and has begun using them on a daily basis to water their plots.

In this volunteer’s opinion this water project has been very successful. Though several farmers had issues with water pressure in their hoses, this problem was solved by moving the pumps to slightly higher ground. Villagers have learned that this setup is not necessarily viable for hilly areas or anywhere that water would need to be pumped uphill, since the water pressure depends solely on the elevation of the pump/barrel in relation to the area being watered. However, the farm plots in Idetero all lie in the flat land near natural water sources and are therefore lower than the ground on which the pumps/barrels have been placed. In short, this issue was not a problem.

The time needed for watering crops has been drastically reduced by the addition of these hoses. It has therefore enabled these 30 farmers to spend more time caring for the crops in other ways, such as mixing manure, inspecting for pests and disease, and in applying pesticide if needed. Several farmers have also added small tree nurseries including avocado, grevillea, and leucena species. The group has also expressed interest in a number of seminars and projects aimed at further improving food security and environmental sustainability.

This project has improved food security in the village of Idetero. Due to the increase in crop abundance and health that will result from the increased attention given the farm plots, nutrition for both the families of the farmers provided with hose and in the community as a whole will improve.

In the volunteer’s opinion, these pumps are a great innovation in that they enable farmers to more efficiently water their crops without any inputs other than their own muscle power. The pumps are also environmentally sound. Though the labor needed for operation of these pumps is less than that needed for endless trips to the creek with buckets, it is still tiring enough so as to discourage excessive use of the pump.

We are grateful to Alexander for completing this unique and important project. We again extend our thanks to Wiley Jordan and Alexander’s other friends, family, and supporters, for providing the funding. 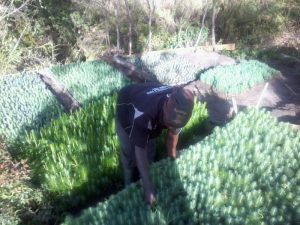 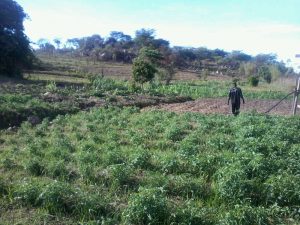