Community Description
Touched on two sides by Vietnam, Cambodia’s Svay Rieng Province is one of its poorest and is comprised mostly of subsistence farmers/fishers and low-waged factory workers. The poor quality of the farmland, as well as the lack of forestry in Svay Rieng, are largely due to unauthorized bombings of the area by Americans during the Vietnam War. 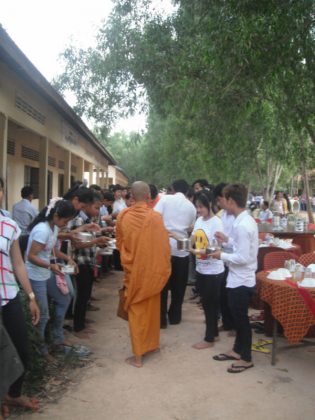 Hun Sen Prosaut maintains a teaching staff of 109 and cares for the upkeep of 13 buildings on its grounds. The school caters to 1,907 students in grades 7 through 12. Several students commute as far as 7 kilometers by bicycle and others must live in one of the three local pagodas because their homes are too far to allow for a daily commute.

Because of these large distances, more than 100 students stay at the school throughout the three-hour lunch break. These students eat lunch, use the toilets, and even shower on the school grounds. Unfortunately, the school does not have a large enough supply of clean water.

The school does have one tank that holds approximately 1,000 liters of water. This tank utilizes electricity to run the well water through a purifier. However, it is on one end of the school grounds and can only supply some of the toilets on the grounds. The younger students, whose classrooms are located on the other end of the school, do not have easy access to clean water for their toilets, hand washing, and drinking.

Every day the water tank is filled 5-10 times, using 1 – 2.5 kilowatts of electricity each time. Hun Sen Prosaut High School is entirely committed to providing a healthy water source for its students, and it spends roughly $250 per year on electricity to pump the water from the well, run it through the filter, and distribute it across the grounds, even though the Ministry of Education provides only about $173 for this purpose. The school director and staff, though, are excited to redirect funds and seek out other donations to provide for this health and sanitation necessity.

A second source of water is needed to provide water for the school.

Project Description
This project is to repair an unused well, build a tower, install a water tank and pump, and provide the necessary piping.

The location has long been picked for a second water tower to provide water to 5 buildings, 50 meters from a well that is already in place. This second well has fallen into disrepair over the years because the lack of water purifier rendered the well unusable. However, the school was granted funds to repair the well by the Ministry of Education several years ago. Until this time the funds have laid unused since repairing the well without building a water tank is unproductive.

To fulfill finally the goal of repairing the well and constructing the water tower for water purification, the school needs to purchase iron rods for the tower ($340), PVC piping for directing the water to the bathrooms ($100), a cylindrical aluminum water tank with a volume of 1,000 L ($300), a water pump with 2 kilowatts of strength ($100), and provide a construction team to build the pyramid tower and lay the piping underground ($300). The total estimated cost is $1,140. 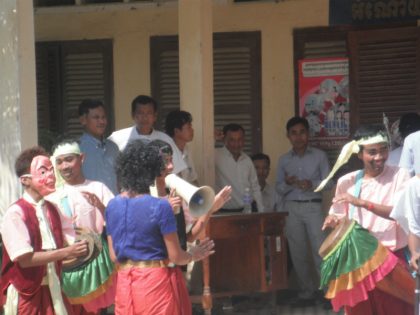 Water Charity funds will be used to purchase the pump, PVC piping, and the tank, which will all be sourced from the provincial town 14 kilometers from the school and transported at cost to the seller, as is customary in Cambodia.

Construction will begin immediately, and the time for completion is estimated to be 3 months.

Project Impact
2,016 people will benefit from the project.

Comments
This is an ambitious project, with a large amount of community support and participation. It has been well planned, and satisfies an urgent need.

Dollar Amount Needed
$0.00 – This project has been fully funded through the generosity of the Jessica Baird, of Palatine, IL, in honor of Richard and Linda Baird, in celebration of the holiday season, with the help of friends and family of Peace Corps Volunteer Christin Spoolstra.

We encourage others to continue to donate using the Donate button below, and we will notify Christin of your donation. Additional funds will be used to fund the next project by Christin and/or those of other PCVs in the country of service.