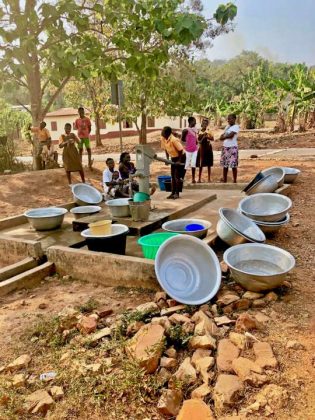 Community Description
Founded in the early 1980s, Dxxxxx Axxxxxx is a farming community with a population of ~3,000 people comprising ~150 households. Located in the interior of the Volta Region about 20km from the regional capital Ho, the village sits on a lushly vegetated and relatively mountainous sliver of fertile land bounded by Lake Volta to the west and Togo to the east. The community is a heavily concentrated settlement of concrete structures intersected by a moderately used highway and surrounded by farmlands and semi-deciduous forest.

The village has two public schools with a total combined enrollment of 179 students, a well-staffed CHPS compound, and a handful of churches. The population is predominantly Christian with a minority of traditionalists. Most of the villagers (both men and women) are crop farmers who grow cassava, bananas, plantains, and maize which the women then sell weekly at a market in Ho. The women are also largely responsible for domestic chores of child care, food preparation, cleaning, and fetching water.

The climate has three major seasons, the major and minor rainy seasons which occur between April and November, and the dry season which lasts from December to March. Although the total amount of rainfall drastically subsides during the dry season, infrequent rain showers do persist allowing for year-round farming. Food security is not a major problem and only a small number of children are malnourished. Water quality, quantity, and accessibility pose the greatest challenges to the health and sustainability of the community. 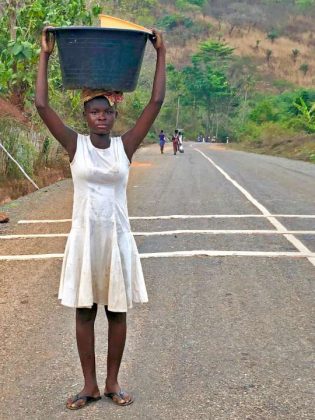 In 2017 the village had an annual growth rate of approximately 2.5%. In 2019, the village is estimated to grow between 2.5% to 4%. This population growth poses many challenges to the community which is largely related to water. The village initially sourced most of its water from an unimproved groundwater source located ~518m from the community center. Fed from the runoff of nearby mountains, the stream carried an abundance of freshwater into the community.

As the village increased in population, so too did the need for additional farmland. As a result, hundreds of acres of land were deforested and replaced with plots of cassava, corn, and plantains. These topographical alterations reduced the quantity and quality of water flowing into the stream, leaving it relatively stagnant and polluted and forced the villagers to locate other water resources. The community now sources its water from two boreholes plus the unprotected stream.

Positioned ~350m apart, the boreholes are located on opposite sides of the community. The northernmost borehole was built in 1982 and is located about 330m from the stream, while the southernmost borehole was built in 2016 and is located on the grounds of the junior high school, about 700m from the stream. Both boreholes accrue the same water tariffs and are used daily, almost exclusively by women and girls. The boreholes are crowded in the early morning and early evening, during which times fetching a single 17L bucket of water can take over an hour. To save time some people avoid the boreholes altogether and walk double the distance to fetch a smaller quantity of decreased quality water.

The village women and girls are primarily responsible for acquiring and managing the household water supply and the water supply of their teachers. Of the two schools in the community, the primary school sits on a hill on the south side of the highway, about 220m from the closest borehole, while the junior high school sits on the east side of the highway, about 50m from that borehole. Everyday female students miss hours of school to obtain water. Before school hours the boreholes are overcrowded and students fetching water during this time arrive at school late. In the afternoon during school hours, the boreholes are locked. If students must fetch water during this time they leave school early to walk over 600m to the stream or to the community health center. As a result, at both the primary school and the junior high school, there are high rates of female absenteeism and low pass rates on national basic school examinations. 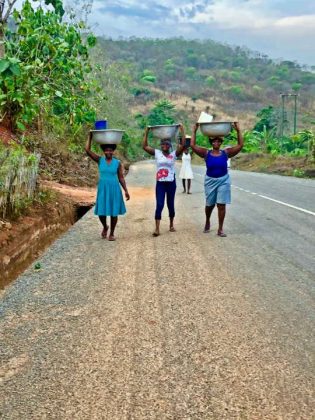 Project Description
This project is to rebuild two boreholes and create a storage and distribution system.

The project conforms to the design standards for the community’s population category and has been approved by the Ho-West District Assembly to include two water supply facilities (each with a pumped source), transmission, a piped distribution network, and two storage reservoirs.

Prior to mechanization, the boreholes will undergo a pumping test to determine if the boreholes can deliver a minimum yield of 10L of water per minute, the specified quantity of water needed to sustain the piped scheme. If the boreholes pass, each hand pump will be removed and replaced with an electrically powered 2hp Petrollu submersible pump. The pump will be used to lift water from the borehole into a reservoir, where it will be stored before distribution. To hold between 35%-45% of the average daily water demand of the community, two 10,000L poly storage tanks will be used. Each tank will be placed on a 14ft elevated rectangular stand made of reinforced concrete using steel rods (3/8in) and supported by four concrete pillars. A stand will be constructed beside each borehole.

Each mechanized borehole will also be attached to a network of distribution pipes which will lead to a total of seven standing taps throughout the community. Approximately 2500m of P.E piping (75mm) will be laid into hand-dug 1-ft deep trenches. Water will be pumped using an electrically powered 4hp 3 phase Petroleum pump. There will be an above-ground pump connected to each poly tank. Although the community will no longer be able to fetch water from the boreholes directly, fetching points will be constructed beside each poly tank. These points will consist of a brass Air Valve standing tap (1.2m) and a brass Air Valve overhead tap (4ft) surrounded by laid concrete. All additional points will consist only of a brass Air Valve standing tap surrounded by laid concrete.

The project will distribute water from the two existing boreholes to seven delivery points throughout the community. This will more than triple the accessibility of water in the village. At present, the greatest distance between any house in the community and either borehole is over 350m. Upon completion of the project, the greatest distance between any house in the community and a water delivery point will be less than 200m. The project contractor has predicted that water quantity should be enough to sustain the mechanized supply system. If the pumping tests yield negative results a secondary project plan has been put in place. A third pumping test will be carried out on the borehole located at the community CHPS compound. If needed, this borehole will be used to supply water to the piped scheme.

Project construction is estimated to take four weeks and will be carried out by a professional team led by the Ho-West district engineer and a private contractor from Krystallon Limited. 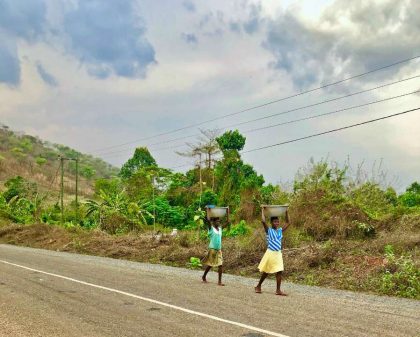 The Dxxxxx Axxxxxx WATSAN committee, established in September 2018, consists of 10 dedicated and respected male and female community members who are responsible for community participation and ensuring project sustainability.

Project Impact
3,000 people will benefit from the project.

Let Girls Learn
By improving water security in the village, this project will help alleviate household poverty through increased economic productivity, especially by women and girls. Upon completion, seven standing taps will help to alleviate overcrowding, reducing the amount of time women and girls spend obtaining water. This will improve education and the women’s social, economic, and political position within the community. 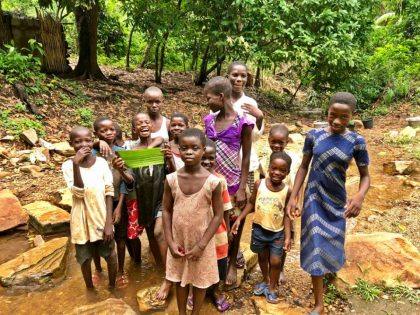 Monitoring and Maintenance
The WATSAN committee members are responsible for the operation and maintenance of community water and sanitation facilities. They have already redeveloped the water fee collection method to ensure the economical sustainability of the proposed project.

The community will be responsible for paying monthly electricity bills. Community members are now required to pay a specific tariff at the water point in accordance with the amount of water they fetch. Water tariffs will remain unchanged upon completion of the proposed project. Under the new water fee collection method, borehole attendants will keep organized records using a payment register. The registers will record the quantity of water dispensed and the tariff collected daily from each of the seven standing taps. In addition to having an attendant and a payment register, each standing tap will also have a water meter. The meters will track tap output and thus provide an additional means of record keeping.

The community will provide skilled management and maintenance to technically sustain the proposed project. The implementation plan consists of a month-long period of maintenance training for the WATSAN committee facility supervisors. By the end of project implementation, facility supervisors will have gained the capacity to properly maintain and care for the new facility. After the project is handed over to the community, the WATSAN members and the PCV will monitor usage at the taps and school attendance of the female students.

Project Funding
This project has been funded by an anonymous donor. Please make a donation to Water Charity using this coded Donate button so that we have funds on hand for future projects in Ghana, and we will advise the PCV of your generosity.