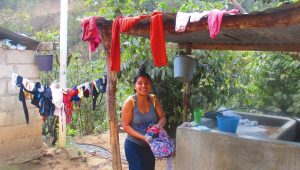 Community Description
Hermosillo is a community situated on the Northeastern side of a river canyon a couple of kilometers away from both Santa Domingo Cascada and Cipresal Cascada, two communities where we have successfully completed projects to bring potable water into the homes. There are 35 homes with a total of 180 people. Many of the households are younger families so the population is expected to grow in the coming years.

Like so many settlements in the Sierra Madre, Hermosillo lost its water in 2005 when 4 days of extreme flooding caused a landslide that diverted the original water source leaving the people without access to water to the present day. The lack of access to the water families need to maintain their households has greatly exacerbated the challenges the people have to deal with in this impoverished community.

Families in Hermosillo make their living by growing coffee on small plots. Some raise honey bees in their coffee groves to supplement their income from the sale of honey. Both of these products are vulnerable to the impact of climate change which has been serious in Chiapas and nearby Guatemala. As a result, many families have to rely on the funds sent to them by a family member working in the United States as an undocumented immigrant. While the money they provide is essential, immigrating usually means that young children behind to be raised in households headed by women. The tedious task of carrying water from the river falls to these women and their children and leaves less time for other tasks.

There is an elementary school and kinder garden with a total 42 children and 3 teachers who live permanently in Hermosillo. The two schools need water for sanitation for the students and to provide good living conditions for the teachers. 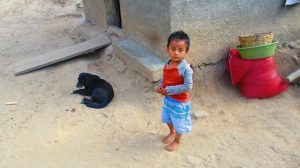 Problem Addressed
The original water tank built many years ago is in good state, requiring only an application of a layer of cement to ensure that it is water tight. The original metal pipe was completely destroyed, so a new water line is required to bring water from a good source 3.5 kilometers away. A distribution tank will be built to allow people to connect their individual lines to bring the water into their homes.

Project Description
This project is to build a water system for the community. A new distribution tank will be built above the community and connected by a new piping system to the existing water tank.

As with all the projects completed to date, it is always a technical challenge to assure that the gravity fed system will successfully deliver water to the farthest homes and those on high ridges since the topography presents challenges. The original system had the capacity to deliver water to all homes, including the 5 households on the slope on the other side of the canyon. So, this system will use the proven distribution, but bring the water into the community via a new line from a better source.

The families are organized into a Comité de Agua, the Water Committee headed by people they elect to direct the work required to maintain their system for the benefit of all. The community members have decided that they will collectively hire a person called the fontanero who will assure the appropriate distribution of the water so that all homes receive water. He will enforce the proper use of the water by reminding people to turn off their faucets when their tanks are full. Part of his responsibilities will also be to perform the maintenance of the system as needed.

The people are committed to doing the manual labor needed to accomplish this project. This will include making the cinder blocks and constructing the distribution tank, resurfacing the old holding tank, and building a small catchment dam at the source. They will work together to lay down the hose across the steep forested patches, burying it to prolong its life. The hose will pass through the coffee plots of members of the community so access rights are assured. 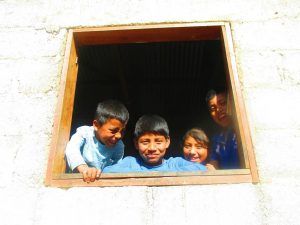 The community has a committed leader who has been very active in working with the Sexto Sol team to arrive at a technically feasible plan for restoring water to the community.

Project Impact
180 people will benefit from the project.

Monitoring and Maintenance
The Comité de Agua will monitor the system, maintain it, and repair it when necessary.

Comments
This project is the 12th water system project in the ongoing Sierra Madre Water Program, a comprehensive effort to improve water access in the underserved and impoverished Sierra Madre de Chiapas region of Mexico, spanning the border with Guatemala. 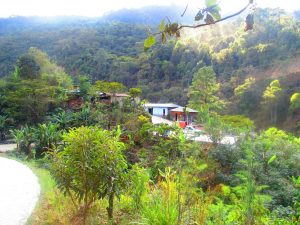 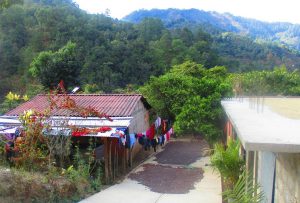 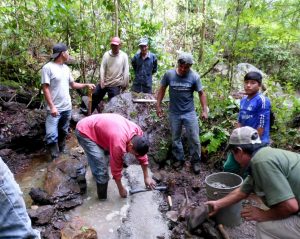 This project has been completed under the direction of Tamara Brennan, of Sexto Sol. To read about the start of the project, CLICK HERE.

The project was designed to build a water system for the community, including a new distribution tank and new piping system. 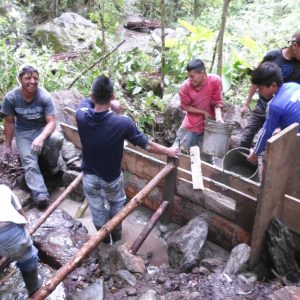 Water to all homes
The people in Hermosillo are feeling absolutely triumphant now that the water is flowing to all homes. People cheered and shouted for joy when the water finally came. Now that it’s been a week of having water on demand, the women say that life has become much easier for them.

Not only does this make keeping a home and family easier, there will be enough water to properly wash the coffee when it is harvested in January this year and into the future. The coffee produced in this valley is considered to be some of the best coffee produced in the Sierra Madre. Now empowered to prepare it properly for sale, it will be possible for the organization CABIOCHI whom we assisted in another project to command the price the growers deserve. That is a significant improvement.

An unexpected delay
The rainy season of 2017 saw some especially bad storms. In the high country the dirt roads are often damaged as a result, cutting off communities for weeks and even months until heavy machinery can be sent in by the local municipality. Hermosillo’s water project was unexpectedly delayed when a massive landslide covered a wide extension of the road. We went in to check the progress of removing the debris to see if the hose could be delivered but decided that the large truck carrying the 35 heavy rolls of hose would not be able to pass. The rains stopped and the work was completed, enabling us to finally deliver the materials.

The community had to change the path that the hose was to take after a coffee farmer asked for a large sum of money to allow the community to pass the hose through his land. The people consider the resulting route to be better since it provides the pressure we’d hoped to achieve in order to reach homes that are farther away. 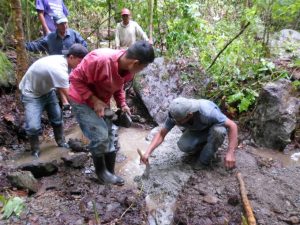 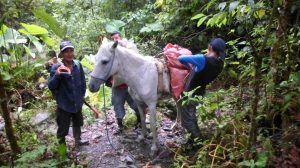 Work crews included youth who experienced the satisfaction of helping the community
Before the rains started the men worked together to build the catchment dam at the source using rocks to build a solid structure that will withstand flooding should that happen again. They used a burro to carry the cement up the steep slope. The young men of the village were actively involved in the work which gave them the opportunity to learn and to feel the pride of helping the community. Once the rain stopped in November, they concentrated their efforts to quickly install the hose with crews working intensely over the week it required. 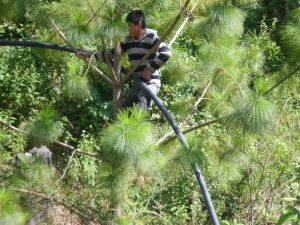 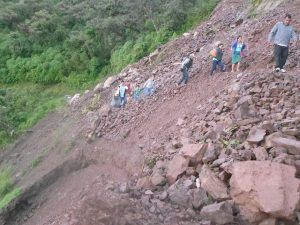 The leaders of the water committee send their heartfelt thanks to Michael and Carla Boyle for their kindness and solidarity with the families in Hermosillo. The Sexto Sol Center also heartily thanks them for their commitment to making life easier for people in this impoverished region.

We extend our thanks to Tamara for completing this important project, and again thank the Boyles for their support.