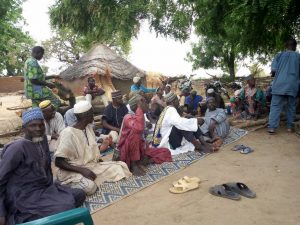 Community Description
Peonga is the center village of a cluster of 11 villages located in Northeastern Benin. The majority of the population identify ethnically as Gando and religiously as Muslim. They speak Fulfulde, one of Benin’s more than 60 local languages, and are traditionally farmers and cow herders.

Students walk miles to and from school each day and still find time to do homework, play soccer, and sell products in the market. Men build houses with their bare hands using little more than local materials that come from the earth.

The mothers in particular Possess strength and resilience. Some walk for miles while pregnant or after just giving birth in order to access the resources at the health center. Others, who are lovingly referred to as “Leader Mothers” volunteer their time to go from house to house and pass on the health messages that they learn at weekly meetings. They do this all while maintaining households, selling items at the market, and even holding careers. 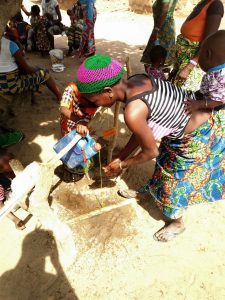 Despite the fact that people spend the majority of the day out in their fields of corn, soy, yams, peanuts, or cotton, one could describe life in Peonga as bright. The women can often be seen with colorful beads at the ends of their braids and pink, yellow, or blue dots adorning their foreheads, noses, and cheeks. Men can often be heard before they’re seen, playing music or having animated conversations with friends and the children always seem ready to sing or dance. These things are all amplified when there is a celebration such as a wedding, naming ceremony, or religious holiday, or even funeral. Rice and meat are prepared, music can be heard blasting through speakers, and everyone in the village is invited. This highlights the fact that within the community, everyone is seen as family and many will sacrifice for the good of the group. People recognize that amazing results can stem from pouring into something that will be for the greater good.

Problem Addressed
Traditionally, women in Peonga give birth at home. They are assisted through the delivery process by mothers, aunts, and other women in the household. Unfortunately, this often takes place in unsanitary conditions as the nearest water source may be kilometers away. Also, since these women aren’t formally trained they aren’t able to help in the case of complications such as hemorrhage or newborns who need to be resuscitated. With time and the efforts of community health workers,more women have begun to frequent the health center to deliver their babies, so much so that the current accommodations no longer suffice.

The health center of Peonga covers a range of 11 villages and a total population of about 23,000 people. There are currently only 2 birthing tables and minimal space for observation and hospitalization. Because of the lack of space, women who are dilating or those who have just given birth are sometimes housed in the same area as sick women, which could lead to cross-contamination for the very vulnerable mothers and newborns. 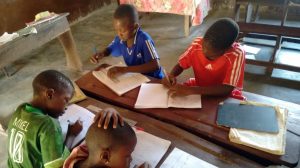 Project Description
A new two-room maternity facility will be built at the Health Center of Peonga.

The facility will be separate from the main building and include a larger birthing room and a waiting room for expecting mothers. It will be located right next to the main health center, and the shower spaces and latrines, located just behind the main building, will still be available and easily accessible by the mothers.

While Peonga doesn’t currently have running water, sinks will be installed so that the infrastructure will already be there once a plumbing system is set up in the village. The center currently gets its potable water from a pump located on the campus of the establishment. Water will be transported from the pump to the maternity each morning by staff members and stored in large buckets for use throughout the day.

In addition, the current spaces will be repurposed for the amelioration of the center. The old maternity will be used as a space to conduct prenatal consultations since the current space is small, cramped, and doesn’t allow for much privacy. The current room where prenatal consultations are held will be used to house medical records which are currently left unorganized and crammed wherever there is extra space. 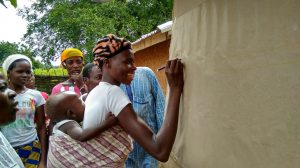 Finally, with the construction of this new facility, the community authorities have agreed to send another permanent birthing aide to work at the health center. This will prevent the current staff from being overwhelmed with the influx of expecting and new mothers that will begin to frequent the health center.

This facility will be built by local masons, brickmakers, plumbers, carpenters, and construction workers using a mixture of purchased and local materials. Wood, sand, and gravel, as well as a sum of money, have already been contributed by the community to meet the 25% community contribution required by the Corps.

The staff at the Health Center of Peonga will help train community health workers to give presentations on maternal health.

Project Impact
23,000 people will benefit from the project.

Monitoring and Maintenance
The Health Center will maintain the facilities after construction.

Although the funds to get this project underway have been provided by an anonymous donor, we continue to accept donations so that we will have funds on hand for the next project in Benin. Please use this Donate button, and your donation will be attributed to this project and the Peace Corps Volunteer will be notified.