Community Description
Gumbiro Village is located in southeastern Tanzania in Ruvuma region. It is approximately 55 km north of Songea town on the Njombe road. It is a picturesque village in the Southern Highlands with rolling hills, arable farmland, and many different habitats. There is a mix of tribes in the village, including the more traditional pastoral types such as the waBarbaig and waMangati. 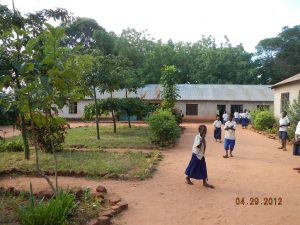 Gumbiro Primary School (Gumbiro Shule Msingi) is the only school in the sub-village of Gumbiro A. It is centrally located in the village and is comprised of grades 1-7. The Zahanati (village clinic) and the Catholic church are both within the eyeshot of the school, so the area sees a lot of traffic and is a great location to set an example for the entire village to replicate.

The community is almost entirely comprised of farmers, both subsistence and for-profit. About half of the families just produce enough for themselves and/or to trade with their neighbors, and half export their surplus grains to neighboring towns of Songea or Njombe.

The community has no electricity anywhere in the village (except for a few homes with private generators) and no water scheme. A few people are able to collect small amounts of rainwater on their corrugated iron roofs, but there are still many homes with thatch roofs.

Problem Addressed
Because of the water scarcity, especially in the 8-month-long dry season, most families cannot spare enough water to have even a small garden. Therefore, their nutrition suffers. Instead of supplementing their diets with essential vitamins, minerals, and proteins from a variety of fruits and vegetables, they usually “fill up” on starches such as ugali (corn meal) or rice, depending on the season.

People living with HIV/AIDS and those suffering from malaria have an even harder time building their immune systems because of this lack of nutrients.

Lastly, the leading cause of deaths of children is from dehydration due to diarrhea, and this is directly related to access to potable drinking water. 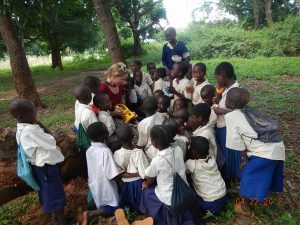 There are nine pumps in the village, but seven are broken, so the majority of women and children spend upwards of one to four hours per day fetching water in buckets carried on their heads from the rivers in the valleys. They use this water for drinking, cleaning, cooking, bathing, washing dishes, mopping, and gardening for their entire families, so they require quite a bit.

At this time, there is little or no likelihood of a piped water supply becomes available. Therefore, roof water harvesting would appear to offer a feasible way of improving quality and availability.

The nearest water source from the school is approximately 1.2 km away. The Environmental Club has started a demonstration permagarden, tree nursery, and chicken coop during the next rainy season, which will all require increased amounts of water.

Project Description
This project is to build a rainwater catchment system at the school.

The tank will be built on plans from a study by the Swedish International Development Cooperation Agency (SIDA) called “Low-cost methods of Rainwater Storage” that built a total of ten tanks in Ethiopia and Kenya with various methodologies and materials.

Soil research was undertaken at the proposed site and it was discovered to be quite sandy. Therefore, the teachers chose a hemispherical-shaped tank design because of its resistance to collapse. Building the tank underground reduces the need for much of the materials used for reinforcement.

The plans explain the mixing of cement with soil from termite mounds at a ratio of 1:8 and a thickness of 6 cm. The teachers want to build a strong foundation with this and build the tank out of mud bricks, using a waterproof cement slurry as the inner coat of plaster.

To reduce the loss of water by evaporation and also to minimize the risk of pollution and insect contamination, the plans for the roof include a timber frame and a hessian cloth reinforced with a thin layer of the cement/soil mixture. A manhole 50 X 50 cm will be made in the roofs to facilitate the cleaning, removal of sediment, and lowering of a bucket to remove the water.

A 75 mm diameter PVC overflow pipe will be installed, as well as a wire mesh 20 X 20 cm inlet to receive the water harvested from the roof. The plan is to include a V-shape gutter and splashguard made from a corrugated iron sheet that will connect the tank with the roofs of two school buildings.

The plans clearly explain the construction procedure of the tank. After clearing the site, the position of the center of the tank is marked with a wooden peg and a string attached with the length of the outer radius of the tank (161 cm). Then the plan is for the students to excavate the hole to a depth of 175 cm (5.74 feet) in a hemispherical shape using the peg and string. Then the soil is to be puddled with small amounts of water and dried grass or sisal fiber and compacted and allowed to slowly dry (cure) for a couple days.

Then the mason, with the help of a few student assistants, is to commence building the foundation and the brickwork in the shape of the tank. The overflow pipe will be fit into this masonry.

A layer of cement, with a ratio of mortar to termite mound soil of 1 to 8, will be applied to this layer to a thickness of 5-6 cm, done in two coats and allowed to dry over a period of two days. For waterproofing, a coat of cement and water slurry will be applied on the same day as the final coat of plaster.

The roof will be being constructed by another carpenter fundi simultaneously, and upon this completion, it will be installed with the help of the mason to completely seal the tank.

Finally, the same carpenter fundi (who doubles as an ironworker fundi) will cut and shape the corrugated iron and affix the gutters to the roofs of the school buildings and connect them to the tank.

According to the study, the tank should be able to hold 7,200 liters of water.

Fundi Nombo (ironworking and construction) and Fundi Domi (mason) have been selected and have offered their services at a discount.

Water Charity funds will be used to pay for materials, include five bags of cement, five sheets of corrugated iron, various carpentry supplies (such as wood and nails) for the roof, wire to attach the gutters, and PVC piping. They will also pay for the transport of all these materials from town.

The village government has offered mud bricks for the mason free of charge, and the school has offered to allow the oldest students to work for free as unskilled labor (such as digging and fetching water for cement) and as assistants to the fundis.

The teachers have taken an active role in making decisions about the project, doing research, choosing and negotiating payment of fundis, estimating the budget, and planning. Furthermore, the school has offered to feed everyone involved in the project on the days they are working.

Project Impact
The tank, which will serve the school, church, and clinic, and all of the employees, students, patients, churchgoers, and attendants, as well as the greater sub-village of Gumbiro A, will serve a total of 2,660 residents of the village.

Comments
It is hoped that the school will be an example for a more sustainable partial solution to the problem of water scarcity in the village, as well as indirectly improve food security and nutrition through the use of permagardens and tree nurseries.

A mama’s kukopa group (savings and loans group) has been started, and the members have expressed an avid interest in using their newly raised funds in the construction of low-cost rainwater storage tanks as well.

The fundis will be able to train other fundis in the village, as well as the students who work as assistants.

Dollar Amount Needed
$0.00 – This project has been fully funded through the generosity of friends and family of Peace Corps Volunteer Stephanie Tatge.

We encourage others to continue to donate using the Donate button below, and we will notify Stephanie of your donation. Additional funds will be used to fund the next project by Stephanie and/or those of other PCVs in the country of service.