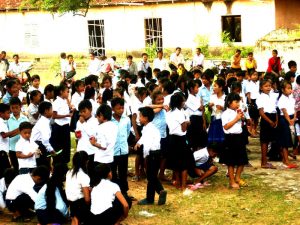 Community Description
Chak is a small village located approximately 12 km north of Svay Rieng town. It is primarily an agricultural village but also has sellers and commuters who work in the factories elsewhere in the province.

The village has access to electricity, but this often cuts out during the daylight hours or during the frequent lightning storms in the rainy season. The village has a small market and some shops in houses and huts along the road, which connects the northern villages to the provincial town. Other than the few shops, most of the village and all the surrounding villages are comprised of rice fields.

The majority of families in the village and commune are rice farmers. Of the sellers, very few can survive solely on the profits from their small shops so they usually work in the fields as well. During the planting, transplanting, and harvest seasons many of the shops are closed. 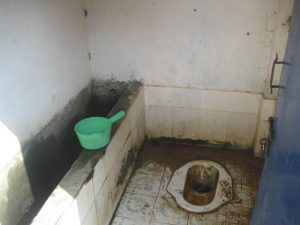 The Go Samut Kampong Chak Primary School, where the project will be done, serves the commune of Kampong Chak. The school is located in Chak village but serves children from throughout the commune. The most distant students have approximately 5 km to travel each morning, usually by bicycle.

The school currently educates over 600 students from the ages of 6 to 11. The school contains 18 classrooms, 8 toilettes and has a faculty of 24.

This school serves as a community center in addition to its educational purposes. The school grounds have a football (soccer) field located behind the classrooms, which is used every day by everyone from primary school students to adults. The school is in use during the entirety of the daylight hours.

Students study an average 6 to 8 hours per day at the school, 6 days per week. After school hours, students use the facilities for private classes and recreation, such as football and other games. 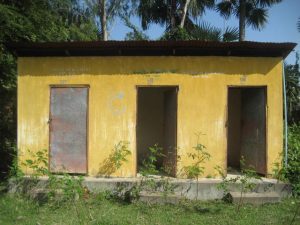 The handwashing station will be 4 m long x 2.75 m wide x 1.5 m tall. It will be made of cement with an upper trough for stored water and 12 faucets within easy reach of a 6-year-old child.

The handwashing station has been designed and shown to a local mason who has already agreed on the design and cost.

School faculty will help with the cement work as much as possible, but the mason, to ensure quality, will do a large percentage of the work.

The school director has agreed to take full ownership of the handwashing station and responsibility for the maintenance.

All faculty members will be present during construction and will assist where they can. Some older students will also be present. The community will contribute $50 towards the project in addition to manpower.

This handwashing station will supplement an ongoing hygiene education project at the school. The goals are to decrease the risk of student illness, affect behavior change, and develop healthy habits among the students.

Project Impact
604 current students and 24 faculty members will directly benefit from the project.

Comments
The handwashing station will increase the level of hygiene at the school, allowing the students to wash their hands at a central location, and will introduce the idea of a separate faucet for handwashing to the students and the community. This will reduce disease and improve the health and well-being of all who use the facilities.

Dollar Amount Needed
$0.00 – This project has now been fully funded through the generosity of Hack & Slash, who have designated Water Charity as a beneficiary of this year’s Hack and Slash Christmas Special Live Onstage and in Technicolor!, held in Baltimore, MD.