This project has been completed under the direction of Peace Corps Volunteer Carolyn Ayres.

The project was to repair two bathrooms at the school.

The project has been completed. The following improvements were made:

On the second floor, in the main bathroom, the water turn-offs on two toilets and all parts inside the tanks were replaced. The sink and valves were also replaced.

In the Kindergarten bathroom, the hose under the toilet was replaced, and a new hose and shower head were installed.

In the apartment, a new faucet was installed, all parts in the toilet tank were replaced, a new hose and sprayer head were installed in the shower, and two small hoses and valves were replaced under the sink.

In the kitchen, new pipes were installed under the sink, and cold/hot temperature controls were replaced.

On the first floor, in the nursery, all parts inside two toilet tanks, and one valve, were replaced, and a part in lower right side of gas heater system to heat water was replaced.

As a final outcome, the toilets, sinks, and showers no longer leak, leaving dry floors and no mold. The school is now able to use the main office and adjoining dining/meeting room. Finally, hot water is available in the nursery.

Following are comments from the school:

Natalia Rostomoshvili, director, Fund New Life School–
“Nursery now is supplied with water. The floors are no longer wet in the bathrooms, and it smells much cleaner. Everything is correct. The children are now able to wash their hands to kill bacteria.”

Nana Mchedlishvili, kindergarten coordinator and bookkeeper–
“ I’m very happy. Before, things were very unsanitary. Now it smells clean, and it`s much easier to keep the children clean by being able to use water from the faucets.”

Water Charity is grateful to Carolyn for completing this project which is so important to the school. 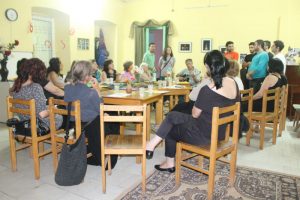 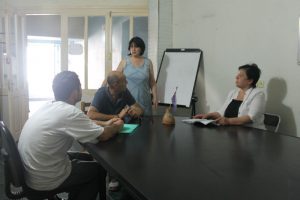