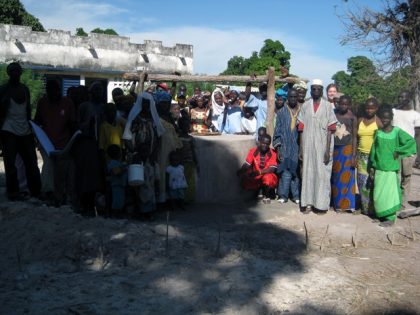 Peace Corps Volunteer Amanda Wybot concluded the Fodé Bayo Health Hut Well – Senegal on schedule and within budget. To read about the beginning of this report, CLICK HERE.

Her final report is so complete and descriptive, we are left with nothing more than to convey to her our heartfelt gratitude for a spectacular job, and await the submission of her next project. 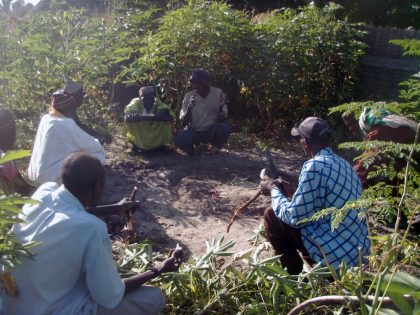 Work for the well at Fodé Bayo’s Case de Santé began on November 16th. A few hours after sunrise, our local well digger, Kindi Baldé, along with every village elder in Fodé Bayo, met at the Case de Santé to scope out the perfect spot. After excess shrubbery from the rainy season was cleared, we all knelt around the chosen spot while our Imam (village religious leader) blessed the project. Less than five minutes later, Kindi began digging.

34 days, 16 bags of cement, 1 hired village helper, and three celebratory dance parties later, the well was finished. The finished well is 12 1/2 meters deep, complete with a cover and latched door on top to ensure that the well water stays as clean as possible.

The project was able to be completed on schedule due to the extraordinary efforts of our well mason, Kindi Baldé, and his hired helper from my village, Walli Janko. They chose to begin digging before I returned to village with their money and supplies (hence the project duration being 34 days instead of 30), and didn’t take a day off until it was completed on the 19th. Materials arrived via a four-hour bumpy tractor ride on Saturday, November 21st. We barely got all of the sacks of cement off the tractor before Kindi and Walli were ripping into the bags and mixing cement to continue work. 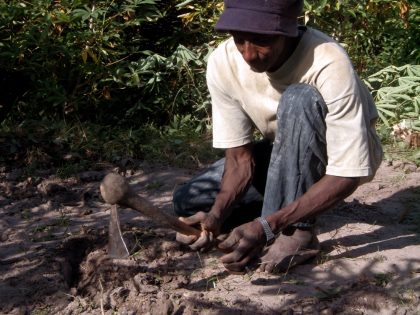 On December 13th, after weeks of hacking away at the tough crust that is the Sahel of sub-Saharan Africa, Kindi and Walli struck water. Word spread like wildfire through the village, and soon everyone was crowding around the well, trying to get a drink of the first water, rubbing it on their faces, blessing each other, and dancing around the well. My host mother waited a few more hours for the water to be deep enough to fill a bucket, and proudly pulled the first buckets of water from the well to make dinner that night.

The most difficult part of the construction was the last few days, in which huge cement cylinders only inches smaller than the diameter of the well had to be lowered into the well – 12 1/2 meters down – so that they could help to retain water during the dry season. This effort, to quote a cliché, really did take a village; five men would lift the cylinder as six men were pulling a rope, and then of course you had the fourteen people standing by watching the effort, (though if you asked them, they were helping too).

On the morning of the 19th, the cover was cemented on the well and the project was pronounced finished. Though the final product is 12 1/2 meters deep, Kindi has promised to come back when the water table goes down during the hot season (thus causing the well to run dry), so we paid him for 14 meters of construction. 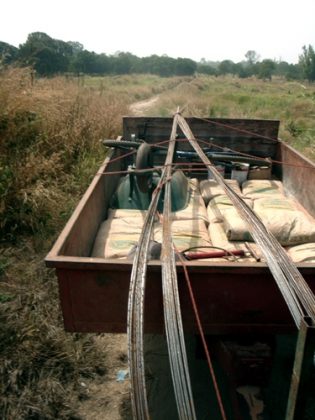 This was the first “big” project completed in my village. It seems like a simple project- a well, near a small regional health hut. But for me and my village, this project meant so much more than just building something. As is, our health hut that struggles to get recognition and supplies from the area’s doctors, as they usually look down on my rural villagers and their “primitive” ways off into the bush as we are. So for my village, having a well built by their proud, little health hut, something that made the health hut more official and like regional hospitals, was a matter of immense pride for them. From the soles of our dancing feet, we want to thank Appropriate Projects for their help in making this momentous project run smoothly and easily. As we say in Senegal, Alhamdullilah!

By every measurement, this was a perfect project. If Amanda’s description and pictures are as stirring to you as they are to us, please click on the Donate button below, and your funds will be used for her next project and/or those of her counterparts in Senegal.

You will note on the project page that this project was dedicated in memory of Nicholas Wybolt, Amanda’s late father. Her excellence as a Peace Corps Volunteer stands out as a true memorial.