This project has been completed under the direction of Peace Corps Volunteer Elizabeth Keller.

The project was initially designed to repair the hand pump in Fass Kahone, but because of difficulties encountered, it changed to a broader objective of improving 8 wells in the community.

I worked closely with my host father, Alfa Balde, the primary health worker at Fass Kahone’s case de santé, and my Peace Corps community counterpart, Omar Balde. After several attempts to obtain solid quotes for repair of the pump, it was determined that it would not be feasible within the existing funding.

Omar suggested using the project funds instead to renovate 6 wells in the village, in addition to building 2 well heads for new wells that lacked bases. The funds would be used exclusively for materials, and all of the labor would be done by the beneficiaries. Alfa and I agreed, and obtained the approval of the community.

Omar and I examined all 8 wells in the village. The concrete on the 6 wells that had well heads would often fall inside the wells, contaminating the drinking water. The 2 wells that did not have well heads were dangerous, and had to be covered by piles of brush so no one would fall in.

Where pulleys were lacking, people would throw buckets with ropes attached inside the wells and pull water up themselves. Buckets would often scrape against the sides of the well, and dirt would fall into the water.

We purchased 34 bags of cement to renovate the wells and build the new well heads. We also bought 8 new high-quality pulleys to replace broken pulleys and install pulleys where none existed previously. The small amount of money that remained was used to buy a new tarp for the roof of Fass Kahone’s case de santé.

The work was completed on 4 of the wells. The materials are available for the remainder, and the final 4 families have plans to complete their renovations in the near future.

While the outcome of this project was different than what was anticipated, it has still proven beneficial to the community. It is my hope that this project, along with continuing education on water sanitation and hygiene, will reduce diarrheal disease throughout Fass Kahone.

We are grateful to Elizabeth for concluding this project, despite the difficulties. We again extend our thanks to Marcia Wijngaarden for providing the funding. 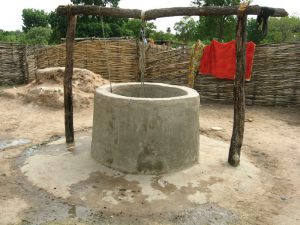 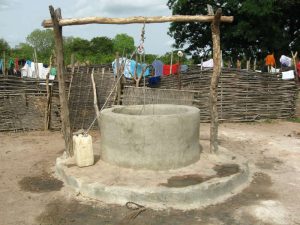