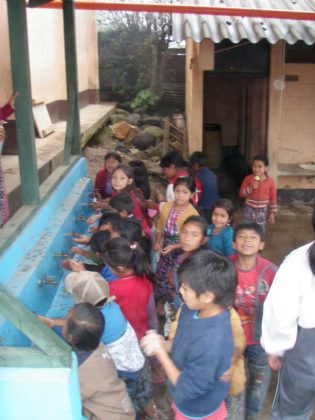 This project has been completed under the direction of Peace Corps Volunteer Abigail Harper. To read about the beginning of the project, CLICK HERE.

The project was to construct two wall-style handwashing stations at the school.

The process was 2 1/2 weeks of construction – 2 weeks doing the hand washing stations and an additional half a week to put the roof together. The roof was added because with the rainy season in full swing and the fact that the school has an afternoon session (when the rains in Patzicia start), it was a necessity to keep the kids from getting wet.

We had one mason, along with an assistant and 2 or 3 parents per day helping out, depending on the work that needed to be done. The parents helped with simple work such as mixing cement, moving block and materials, and breaking up the rocks that were used to fill the foundation. On several days, 4 parents came as the work was too labor-intensive for just 3.

The design of the project is one that our trained mason had done before in 6 other schools in Patzicia – a design from a Guatemalan NGO called Agua para la Salud meant to deal with basic “faults” of traditional handwashing station designs – namely there is a mechanism for cleaning out the drainage should it get clogged. The drains have small enough holes so that large objects don’t get caught in the pipes, and the faucets are attached using metal piping instead of plastic which breaks easily and renders the faucets useless. 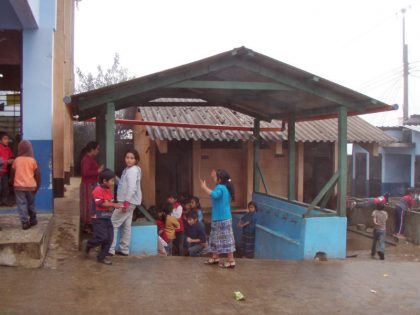 In addition, the mason constructed a cement platform and step to elevate the stations and allow for easier drainage from the roof rain water. Using wooden forms, the mason and helpers built the base of each handwashing station with cement, filled it in using large rocks to save on material (avoiding needing more cement to fill it in), then inserted PVC piping for drainage before filling the rest in with cement, and constructing convex drainage so water does not puddle up in the sinks.

Each wall has 8 HG (metal) faucets attached to the metal piping inside the station that connects them to the school’s water tank, and 4 drains which, as mentioned earlier, have been fashioned in a way that small objects can’t fit through – often a problem in schools in Guatemala where children like to see what they can fit down the drains!

The location for the faucets was chosen to be directly outside of the bathrooms, ensuring a helpful reminder to students leaving the bathrooms to wash their hands as they have to walk in between the two stations to return to their classrooms.

After finalizing last touches on the hand washing stations, the mason and helper worked with one parent for two days to construct the roof, using wood beams for support and pieces of corrugated sheet metal that the school had donated for the roof.

PVC tubing was used to create gutters and drainage from the rain water that collects on the roof. The teachers use buckets to collect this water and then use it for cleaning in the school.

The school contributed money from its own funds for the completion of the project – part from the school budget and part with the help of parents. While initially the school was worried about having to take money out of the school account, it has agreed that it was a worthwhile investment, has caused huge changes in the ability of the students to practice healthy habits, and was the best possible use for the funds.

The teachers put together their individual money after the stations were completed to paint them. However, they didn´t wait long enough before they dried before using them for handwashing. Hence, the paint started to come off, and a new coat will have to be applied.

Upon completion of the project, the school La Muchacha now has 16 new faucets for the practice of healthy habits in the school! This means that the mandatory pre-snack handwashing and post-snack tooth brushing has been made much easier for its students, and the teachers can ensure that students are doing what is necessary to prevent common illnesses.

It has made a dramatic difference in the efficiency in the school and in the students’ healthy habits. While observing at the school recently, the director and I noticed that every child leaving the bathrooms remembered to wash their hands with soap without fail, whereas previously the students often just returned to their classrooms.

Also, because classes are able to wash their hands more quickly and efficiently before snack, it has ensured that they can do so closer to the actual time that snack is given, allowing for less time for their hands to get re-contaminated with germs and bacteria that could make them sick.

All the teachers agree that this has been a major improvement for the school. Previously, the school’s main source of water for hand washing was a giant water basin, into which the students dipped buckets. This caused contamination of the water, especially as it was open all day and subject to insects and bacteria, as well as other children drinking from it and playing in it.

Now the school has a constant, clean water source. School staff is doing its part to conserve water by disconnecting the stations when they are not being used, so that students can’t let the water run.

All in all, this has been a very successful project that will continue to benefit the students and their families for many years!

Thanks for all your help. I look forward to working with you again in the future and feel fortunate to have such a wonderful organization working to make the world a healthier place!

We wish to thank Abigail for completing this project, and again extend our gratitude to The Soneva SLOW LIFE Trust for providing the funding. 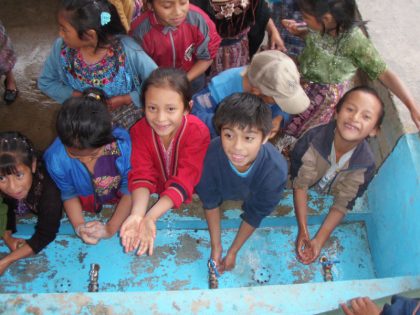 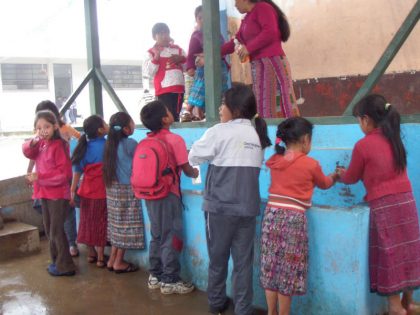