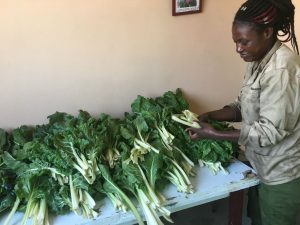 Community Description
Arandis is a town in Erongo Region, Namibia. It has been called the Uranium Capital of the World, as it is located just 15 km outside the world’s largest open-pit uranium mine, the Rössing Uranium Mine, controlled by Rio Tinto. The town was established for the workers of the mine in 1978. It now has 7,600 inhabitants, most of whom are somehow connected to the mine

The town continues to thrive, primarily as a mining community, in the harsh Namib desert despite the political and economic upheavals Rio Tinto and Namibia have experienced over the past 30 years.

Arandis is home to two technical schools, so the population fluctuates with the school semesters. Life in Arandis is quiet and, being a very small town, there isn’t much to do after the workday is done. However, the surrounding desert is a feast for the hiker, birdwatcher, or adventurers.

Dreamland Gardens (DG) is a project that produces fresh high-quality vegetables in a greenhouse on the outskirts of Arandis for the benefit of the town.

Problem Addressed
Mrs. Makina is an experienced gardener who has been planning, planting, maintaining and harvesting produce since childhood. With her husband, Joseph Makina, she founded DG in 2005 as a family project. With the success of initial plantings, she began to sell excess vegetables to friends and neighbors in Arandis, and demand for the fresh produce drove the expansion of the garden. 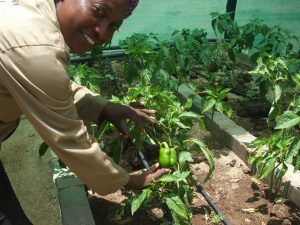 In 2013, the DG project benefited from a substantial grant through the Namibian Social Security Commission’s Development Fund. Mrs. Makina supervised the planning and construction of a greenhouse facility with raised seedbeds and irrigation and electrical systems.

Early on, it was apparent that the success of DG was entirely dependent on access to potable water. Arandis gets its freshwater from a desalination facility in nearby Swakopmund. It was that freshwater that DG initially used for its crops. DG thrived and was able to produce a large variety of vegetables that were sold at local markets. At its peak, DG employed 6 full-time workers.

The cost of using freshwater, however, proved to be cost-prohibitive and DG had to find another solution. When Arandis was built, the town planners included an advanced water recycling system. The system was so advanced that its output has been tested and deemed drinkable.

In 2017 Mrs. Makina petitioned the town to have access to the recycled water, which the town granted and now provides for free. She then had the water tested for purity by the Namibian Ministry of Agriculture and results were extremely positive; the recycled water could be used for consumable agriculture.

With free water, DG then had a brighter outlook. New crops were planted and harvested and several employees who were laid off were rehired.

Late in 2017, however, DG started experiencing new problems with its water supply. The 30-year-old system that supplies recycled water began to fail. The recycling system was in constant need of repair. During these increasingly lengthy outages crops in DG withered. DG managed to install a 10,000-liter water tank to help it survive the outages and, initially, it was enough. But the outages became more frequent and lengthy. By early 2018 DG had experienced 8 outages with the longest being 9 weeks. Each time the water returned DG planted new crops only to watch the plantings die from lack of water. The shorter outages DG was able to survive because of the reserved water in the tank. 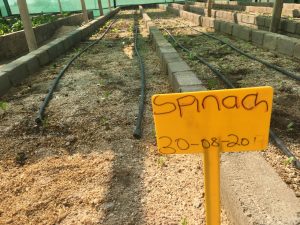 Further, it was found that DG’s irrigation system, which allowed for more efficient use of water, was no longer functioning, and, since DG could not earn from crops it did not have, it had no means to repair the system.

Two 10,000-liter water tanks will be installed on platforms. These will increase the water reserve from the current 10,000 liters to 30,000 liters.

The current irrigation system will be repaired. The system pumps are powered by a solar/battery system, and the battery does not hold a charge and must be replaced. Further, the pumps must be reconfigured to accommodate the additional tanks.

The irrigation system was designed to supply water through trickle lines. Once this system is back online, and with 30,000 liters of water in reserve, it is estimated that DG can survive a water outage of 8-10 weeks.

The project will proceed under the direction of DG, working with the PCV, and with the assistance of the Rössing Foundation, an organization set up by Rio Tinto to improve the lives of all Namibians, serving as the project’s advisor.

Project Impact
Over 5,000 people in the community will benefit from an ample supply of nutritious vegetables, available at a low cost.

Monitoring and Maintenance
The sustainability and maintenance of the additional water tanks will be no different than that of the existing tank. Once installed, the tanks require little attention beyond keeping them filled.

The watering system will require maintenance and Elizabeth Makina has already been trained in its maintenance. Keeping it maintained will be dependent on maintaining adequate funds to replace parts that breakthrough normal wear and tear. Those funds are part of the budget that the garden has currently set up. Once water is flowing and plants growing, the garden will be able to maintain itself.

Project Funding
Although the funds to get this project underway have been provided by an anonymous donor, we continue to accept donations so that we will have funds on hand for the next project in Namibia. Please use this Donate button, and your donation will be attributed to this project and the Peace Corps Volunteer will be notified.