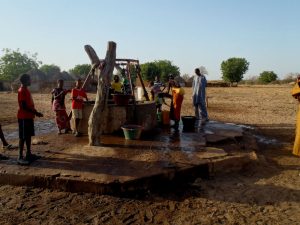 Community Description
In central Senegal, within the Kaffrine region, Diam Diam Saly is a small village located 21 kilometers south of the city of Koungheul. The village is home to approximately 320 people in 19 households. Pulaar is the main ethnic group within the village, with both Islam and Catholic religious influence.

As in most rural villages in this region of Senegal—often referred to as the “Peanut Basin”—the people of Diam Diam Saly derive the majority of their income from farming. People farm primarily peanuts and millet and garden a variety of vegetables during the rainy season months of June through October. The villagers also raise large herds of cattle and other farm animals from which they may generate a secondary source of income when needed, and milk or meat to feed their families. 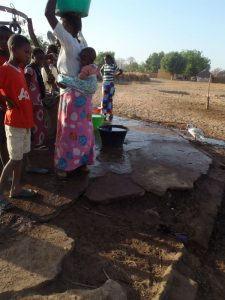 Diam Diam Saly has no running water. The village contains one cement-lined well, constructed in 1980, that is approximately 32 meters in depth. In the past few years, due to newly formed water erosion pathways, rainfall has damaged the overall structure and integrity of the well. As a result, large amounts of runoff from family compounds and nearby fields seep into the well and contaminate the water. This runoff includes fertilizers and pesticides applied to fields and even animal and human waste.

During periods of large rainfall (about one-quarter of the year) the water becomes undrinkable. During this season, villagers are forced to take donkey-drawn carts to the village of Saly Escale (located one kilometer from Diam Diam Saly), pull water from wells, and haul it back to their family compounds.

Project Description
This project is to repair the existing well in Diam Diam Saly such that the water will be potable year-round.

The people of the village will implement the project, as laborers including masons exist within the population of Diam Diam Saly. These workers are well aware of the issue, as it directly affects them, and have determined the best way to solve it.

Water damage has compromised the internal cement and rebar lining, as well as deteriorated the above-ground cement platform (which is designed to prevent water from penetrating the soil nearest the well). 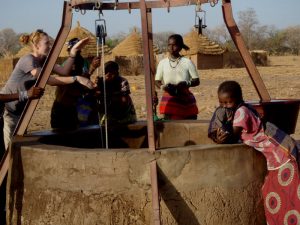 Initially, laborers will repair the damaged internal lining of the well by reconstructing a rebar frame and rebuilding the cement lining. Masons then plan to build and reinforce the cement platform surrounding the well, such that future rainwater will be diverted around the area.

Water charity funds will be used for materials, such as cement and rebar, and for labor costs.

Project Impact
320 people, the entire village of Diam Diam Saly, will benefit from the repairs to this well.

Comments
This is an important infrastructure project for the community. It will make safe water available to the community during the entire year, thus improving the health and well-being of all of its citizens.

Dollar Amount Needed
$0.00 – This project has now been fully funded through the generosity of The Andando Foundation, with the help of friends and family of Peace Corps Volunteer Katie Richards.

We encourage others to continue to donate using the Donate button below, and we will notify Katie of your donation. Additional funds will be used to fund the next project by Katie and/or those of other PCVs in the country.