Location
Caserio Cushpiurco in the district of Agallpampa, Province of Otuzco in the department of La Libertad

Community Description
Cushpiurco is an isolated Andean farming community of 60 families located in the eastern limits of Agallpampa district (Otuzco, La Libertad, Peru) at 3,400 m above sea level. The principal economic activity is agriculture: the raising of small variety flocks of livestock, the cultivation of potatoes, beans, and oca among other crops, trout farming, and small-scale forestry. 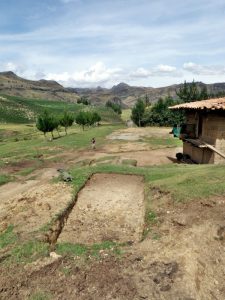 Cushpiurco was categorized as ‘extreme poverty’ in the most recent national census, and demonstrates high levels of infant mortality and chronic malnutrition.

19 families belong to the agricultural cooperative ‘Sierra Natural Andina’ of Cushpiurco, which works to improve the common good. They have identified the random grazing of cattle to be detrimental to the common water supply and seek to corral the large livestock and implement new procedures to protect the environment.

Project Description
This project is the installation of a biodigestor as a model project, and the teaching of appropriate educational components to spread the technology.

The Technology
A biodigestor is a plastic bladder that is filled with organic matter, typically excrement, which is mixed with water allowing the matter to decompose into two bi-products, fertilizer and biogas. The plastic bladder is placed in a hole in the ground in order to maintain heat. The bladder will over time rise like a balloon filling with gas displaying that is has sufficient gas to be used. The gas is then accessed the through tubing to connect to a stove or heating unit.

The operation of the biodigestor requires the cooperative to provide roughly 20 kg per day of manure, a requirement that will be met by the cooperative’s cattle. In the past the cows have been left to graze wherever grass or clover could be found, and their defecations were left wherever they fell. Given the prevalence of quality grazing zones in the near vicinity of the water source and the fact that the community has constructed their own water systems which collect from near-surface springs, the practice change of corralling their large livestock will greatly reduce the presence of livestock around the water source.

The Benefits
The installation of the biodigestor will bring many benefits, both economic and sanitary, as it is a technology whose impact is diffusive, offering a shift in the community’s agricultural paradigm. 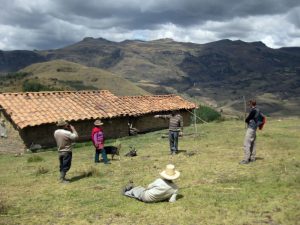 The benefit of this change is two-fold: first, fecal material will no longer linger around the source (or anywhere else for that matter), providing a constant stream of potentially harmful microbes, and second, the large livestock will no longer aid in the rapid erosion around the water source which caused a landslide (and destruction of the previous spring) in 2009.

Furthermore, Cushpiurco’s geographical location near the top of high Andean ridges in semi-arid grasslands represents a challenge to providing year-round reliable (and uncontaminated) water sources. Compound this with overgrazing and intensive agricultural practices – both of which the cooperative is moving away from in favor of sustainable practices – and the resulting erosion and lowered soil-moisture retention levels presents the possibility of seasonal water shortages on a yearly basis.

Beyond the aforementioned direct protection of the water source, the biodigestor will provide watershed-wide benefits through reduced erosion rates and elevated soil-moisture retention levels resulting from the application of biol (liquid fertilizer produced by the unit) on the various crops patch-worked amid the precipitous slopes.

Lastly, the principal way residents of Cushpiurco disinfect their drinking water is through boiling. However, since a wood fire must currently be built any time water needs to be boiled, many times the disinfection phase will be passed over to avoid the inconvenience of fire-building. The production of methane gas from the biodigestor presents a solution, since it will provide an instant source of fire, thus encouraging the constant use of proper hygienic practices.

Preliminary trainings, design consultations, and site preparations with the cooperative members have already taken place, and final installation is ready to proceed. Although one family will handle daily management of the biodigestor and benefit from the bio-gas, the association members and their families will benefit from:

The Implementation
The members of the association, especially the president, have been heavily involved throughout the development of the project in terms of ideas and funds, both cash ($120) and in-kind ($165). Further support has been given from Peace Corps Peru in the form of materials ($350), and private donations in the form of cash ($120).

Water Charity funds will be used to purchase the remaining components necessary for construction, including the biogas kit, conduction hoses, and plastic covering. Once these materials are secured, installation will proceed.

Project Impact
Over 100 people will directly benefit from this project.

Comments
This project results in a method of protecting the water resources of the community while creating valuable products, namely natural gas and liquid fertilizer. It can be considered as a model project, demonstrating the value of a technology in the area, which can be replicated to produce similar benefits in other locations.

Given the alarming rates of chronic malnutrition due to diarrheal infections in children and infants, the steps taken towards reducing rates of microbial infections will go a long way to improving the lives of the people of Cushpiurco.

Dollar Amount Needed
$0.00 – This project has been fully funded through the generosity of the Elmo Foundation.

We encourage others to continue to donate using the Donate button below, and we will notify Peace Corps Volunteer Royce Haughton of your donation. Additional funds will be used to fund the next project by Royce and/or those of other PCVs in the country of service.