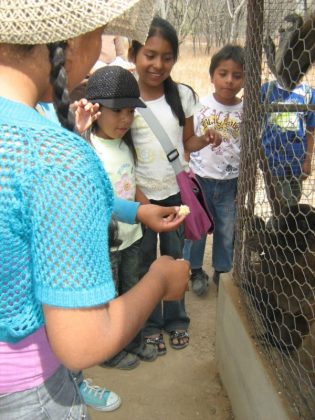 Community Description
Las Pampas in a small rural community settled in the northern district of Olmos in Lambayeque. It currently does not have electricity (it is projected to be installed by the end of the year) and all houses depend on their own wells for water.

There is a local primary and secondary school, a locally elected governor and several government-sponsored organizations. The population is under 1,000 inhabitants.

The community is located 10 kilometers from the town of Olmos making it difficult (and costly) to find work outside of manual labor in the nearby fields. For this, the local population has little means of income outside of small animal husbandry and subsistence farming. One of the only other options is the promotion of conservation and eco-tourism.

Las Pampas is home to one of the best animal refuges in Peru, Crax 2000, dedicated to conservation and the re-introduction of critically endangered species. The animal refuge is managed by locals and currently produces a small income, 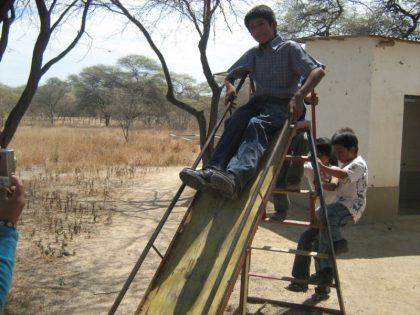 The refuge is made up of two parts. One focused on various bird species, including the White Winged Guan, and serves as a breeding center with the objective of reintroduction and salvation of critically endangered species.

The other part of the refuge is for rescued animals, recovered by the National Institute of Natural Resources (INRENA). These animals are often wild animals that have been recovered from circuses, markets, and private citizens and are often too domesticated or ill to be reintroduced. They will live at the refuge, being taken care of by the biologist and local workers.

Crax 2000 itself is a community center, used by school groups, local organizations and tourists to learn about animal conservation and reintroduction, complete studies based on these animals, and have environmentally-themed meetings and events.

There is no water available at the refuge to properly support the influx of tourism, the workers who live there and the continued conservation of the White Winged Guan. 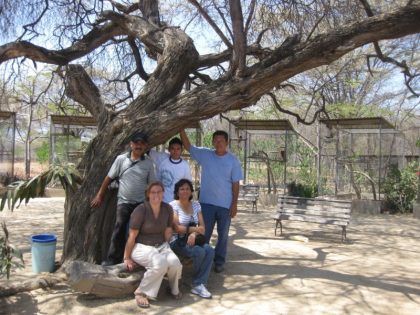 Currently, the refuge has to buy water from the district municipality that brings it in a large truck, costing $80 weekly and all food has to be bought in local markets, costing more than the refuge makes from the donations by visitors. At that, it barely provides sufficient fresh drinking water to the workers and animals.

Without water, the center is unable to maintain a vegetable and fruit garden that would drastically lower their maintenance cost for feeding the animals.

Currently, visitors to the center help feed the animals and learn about the important conservation work that they do. However, there are no handwashing stations, functional bathrooms (the bathrooms are already built but lack a water connection) or rest areas with drinkable water in the entire center.

Project Description
This project is to improve the sanitation and general health of the refuge and its user groups by providing crucial components to supplement the equipment and materials on hand.

Crax 2000 already has a water pump, a cemented well and the tubes to connect to it, but they lack the funds to purchase a motor to complete the system.

The installation of a motor will provide water for the workers who live there, for the tourists (with hand washing stations, bathrooms and installation in the guest bungalows), for the fruit plants and vegetable gardens that the refuge has for its animals, and for the animals themselves.

Project Impact
The improvements will allow a fourfold increase of the current number of people served at the refuge, raising it to over 20,000 visitors per year.

Comments
The simple improvements that will be accomplished will have a major impact on the community and the refuge by allowing the refuge to operate in a sanitary manner and live up to its full potential.

The refuge benefits the community by diversifying employment opportunities. In addition to the impact on the wildlife, the refuge creates an important teaching opportunity for visitors to learn about wildlife conservation.

Dollar Amount Needed
$0.00 – This project has now been fully funded, through the generosity of The Soneva SLOW LIFE Trust as a part of their Clean Water Projects initiative, with the help of friends and family of Peace Corps Volunteer Lisa Melendy.

We encourage others to continue to donate using the Donate button below, and we will notify Lisa of your donation. Additional funds will be used to fund the next project by Lisa and/or those of her counterpart PCVs in Peru.