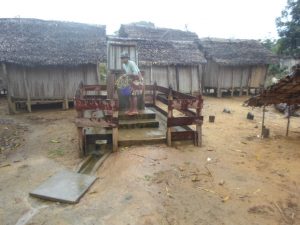 This project has been completed under the direction of Peace Corps Volunteer Eddie Carver.

The project was to improve two wells in the Tsivangiana fokontany.

We have successfully completed the Tsivangiana Well Improvement Project in Madagascar.

We focused on three wells which already had concrete-lined shafts but whose wellheads were allowing in pollutants. A wellhead needs to be high off the ground and well covered to prevent contaminants from blowing or washing in, and it needs a “drainage apron” with enough of a gradient for contaminants to flow away from the well and into a soak-away pit.

In one case there was no drainage apron. In the other two cases, the aprons had eroded and were allowing all sorts of pollutants into the wells, making them unusable.

We introduced a competitive bidding process to find neighborhood groups that offered the greatest community contribution.

Initially two groups won and we applied for funds from Water Charity with those two groups in mind, but we ended up having enough money to help three groups.

The groups provided all labor and local materials like sand and wood. The project funds went toward imported materials like cement and iron rebar. The neighborhood groups also contributed money to a fund to hire technicians. One technician used scrap sheet metal to construct his own mold, so that we could lengthen the circular shaft to a safe height. All three technicians led the construction of the new drainage aprons, soak-away pits, and protective tops, with the villagers working under their guidance.

These three wells had been out of use, forcing people to fetch dirty stream water, so by rebuilding them we’ve dramatically improved the quality of drinking water for many hundreds of people.

The well construction was part of a larger water and sanitation education campaign in the area. Each neighborhood group was required to attend wat/san lessons on (a) proper location of wells – away from privies and ruminants, etc. (b) proper depth of wells – they should be deep enough to allow the ground to act as natural filter (c) keeping both wells and buckets closed to avoid air- or water-borne contamination, (d) using Sur Eau to chlorinate water, and (e) basic hygienic practices like hand-washing with soap before meals and after using the privy. In total about 300 villagers participated in this short series of lessons, which accompanied our meetings to organize well construction.

Thanks to Water Charity and its donors for their support with this project.

We are grateful to Eddie for completing this important project, and again wish to thank Michael and Carla Boyle for providing the funding. 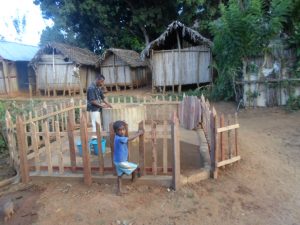 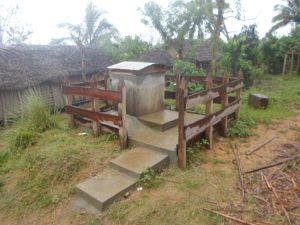